There is no better way to experience a country while simultaneously ticking something off the bucket list than by climbing its highest mountains. We’ve compiled a list of the 10 highest mountains in Ireland for you to get your teeth into.

Ireland remains somewhat of an undiscovered adventurers playground on the international scene. That’s good news for us, fewer crowds to share the grounds with. Now what better challenge to set yourself this year than climbing some of Ireland’s highest mountains? Here are Ireland’s 10 highest peaks for you to test your talents on.

Hiking Kit: The Essentials to Get you Started

Everyone knows Carrauntoohil, as it is the highest peak on the island, standing proud at 1,038 metres high. It is the central peak of the impressive Macgillycuddy’s Reeks range. A range which is littered with some of the highest peaks in the country including Beenkeragh at 1,010 m and Caher to the west at 1,001 m. The views from Carrauntoohil are something special to behold, overlooking three bowl-shaped valleys, each with its own lakes. At the top sits a steel cross to greet you when you summit.

Check out our full guide on everything you need to know to climb Carrauntoohil.

Kerry is where Ireland’s mountains reach their pinnacle. If you are a hiker visiting this country that’s where you need to head. Cnoc na Péiste or Knocknapeasta is a 988 m peak that is also part of the Macgillycuddy’s Reeks range and it is the fourth highest summit in Ireland.

Brandon Mountain or Mount Brandon is again in the Kingdom of Kerry. A 952 m mountain in the Dingle Peninsula. It is the highest peak in Ireland outside of the Macgillycuddy’s Reeks. The route is a part of the Christian pilgrimage trail known as Cosán na Naomh.

The first on our list outside of Kerry is Wicklows Lug,  a 925 m peak. The mountain is the highest peak in the Wicklow Mountains range and the highest in Ireland outside of Co Kerry. It is an unusual mountain as its summit plateaus making it difficult to navigate in poor weather. There are no marked routes on the mountain and it will talk you a god 5-8hrs to do the whole thing, covering between 10 – 16km. But the views are something else, if you get a good day you will catch sight of Snowdonia in Wales.

Check out our full guide on Lugnaquilla here.

Galtymore is a 919 m mountain that sits on the border between Limerick and Tipperary. It is the highest of the Galty Mountains and the tallest inland mountain in Ireland. There is plenty to explore in this range, with three glacial lakes; Borheen Lough, Lough Dineen and Lough Curra and stunning evidence of the Ice Age to feast your eyes upon.

Check out our full guide on the Galtees here.

6 of the best mountain walks in Ireland 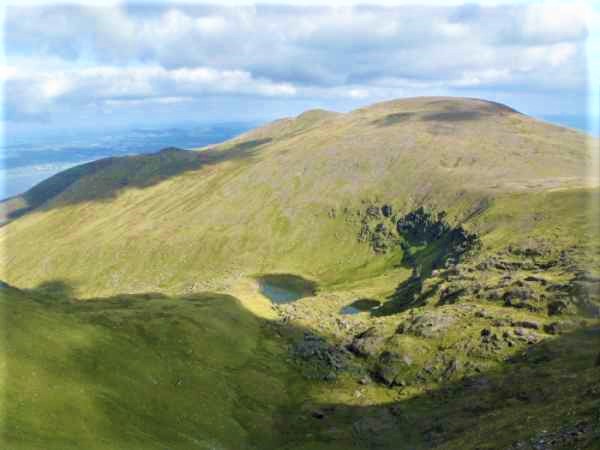 We’re back in Kerry for this lesser-known but impressive peak, the 851 m Baurtregaum. It is the highest mountain of the Slieve Mish Mountains in the Dingle Peninsula. The name means ‘three hollows’ referring to the surrounding valleys of Derrymore, Derryquay and Curraheen. 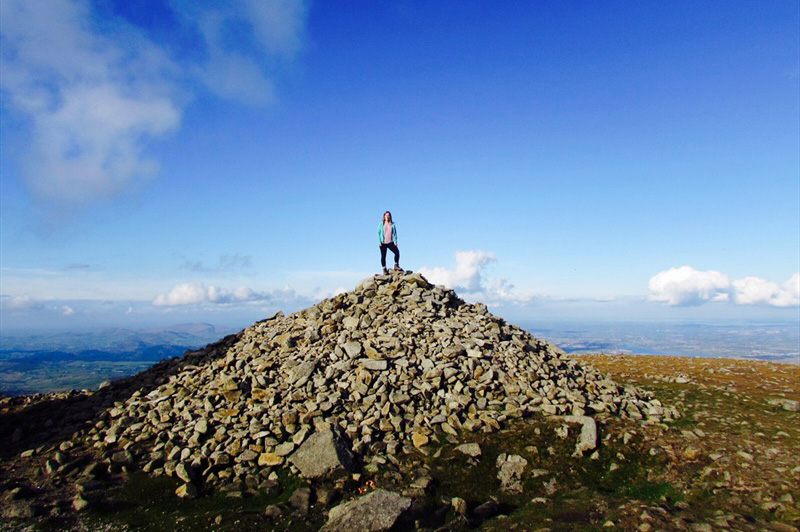 This 850-metre mountain in Northern Ireland is part of the iconic Mourne Mountains. Slieve Donard is the highest peak in Northern Ireland and Ulster. A small stone tower sits at the summit, connected to the Mourne Wall which runs up the western and southern slopes. Two prehistoric burial cairns also sit on the summit, so if you get bored of the views, there is plenty to entertain.

Check out our full guide on climbing Slieve Donard.


Mullaghcleevaun (Mullach Cliabháin) is an 849 metres tall mountain that is the second-highest of the Wicklow Mountains. A stunning small lake, Lough Cleevaun, is nestled just off the summit. People commonly ascend the mountain via Black Hill from the carpark just outside the town of Lacken.

Mangerton Mountain is part of the Mangerton range in Co Kerry. There is so much to explore within this range. The mountain is part of a massif that includes the summits of Mangerton North Top, Glencappul Top and Stoompa. Enclosed within this is a stunning U-shaped valley called Horse’s Glen. There are several lochs dotted around the area including Lough Garagarry, Lough Mannagh, Lough Erhogh and The Devil’s Punchbowl.

Finally, the increasingly popular Purple Mountain stands at 832m. It is, again, a part of a massif that includes the peaks, Tomies and Shehy. To the west of it is the Gap of Dunloe, and to the south and east are the Lakes of Killarney. Some of Purple Mountain is also part of Killarney National Park, so you know it’s going to be beautiful.

11 of the Most Drool-Worthy Glamping Spots in Ireland