Welcome to Northern Ireland’s highest peak (850m), towering above the magical Mourne Mountains, the town of Newcastle and the deep blue Irish Sea.

The Mournes are a stunning mountain range with 12 peaks rising above 600m, the iconic Mourne Wall and plenty of walks on offer to suit all ages and abilities.

Slieve Donard in Co Down is a relatively short walk, just 4.6km one way from the car park to the summit, although it is fairly steep in places so will give you a good workout. The height of Slieve Donard is 850m so the views are well worth the effort.

As seems to be a tradition in many parts of Ireland, the mountain is named after a saint. Saint Donard was known as a disciple of Saint Patrick, and he built a small prayer cell at the summit of Slieve Donard during the fifth century.

Good for: Less experienced hikers who want a shorter walk but still be rewarded with great views

As you leave the Donard car park, the best route is a well-defined trail that takes you up the hill along the Glen River through a rich forest of pine, birch and oak. You’ll end up crossing the river via bridges a few times, but thankfully you don’t need to get your feet wet!

As you climb higher, the river bank gets steeper and there’s a sharp overhang for a section, so be extra careful. You’ll reach a gate and a stile as you pass thick forest on your right and then carry on up the track above the river towards the saddle between Slieve Commedagh and Slieve Donard.

You’ll cross the river again and continue up towards the iconic Mourne Wall as you reach the saddle. You then turn left and follow the wall as it guides you up a steep hill to the summit. There are a few false peaks along the way, so be patient and wait until you see the look-out point/cairn at the summit before you start celebrating.

From the top, you will be able to see the Mourne Mountains stretching out like a rich tapestry all around you. In good weather, you could also spot the Isle of Man in the Irish Sea, the Wicklow Mountains to the south, and also the peaks of Wales, Scotland and even Donegal to the west. Amazing! A little closer, you will see the lovely sandy, pebbly Newcastle Beach with a strand that’s 2.5kms long.

Further north, Lough Neagh should be visible to the north-west as well as the hills of Antrim and Belfast.

If you want a quieter hike, you could choose the Bloody Bridge route (10.4km return) up Slieve Donard which follows the Bloody River. It’s a fairly steady climb up beside the river until you reach the Bog of Donard. From here, it becomes quite steep for a time to reach the summit. This trail will be less busy, but is also not as clearly marked as the alternative route. 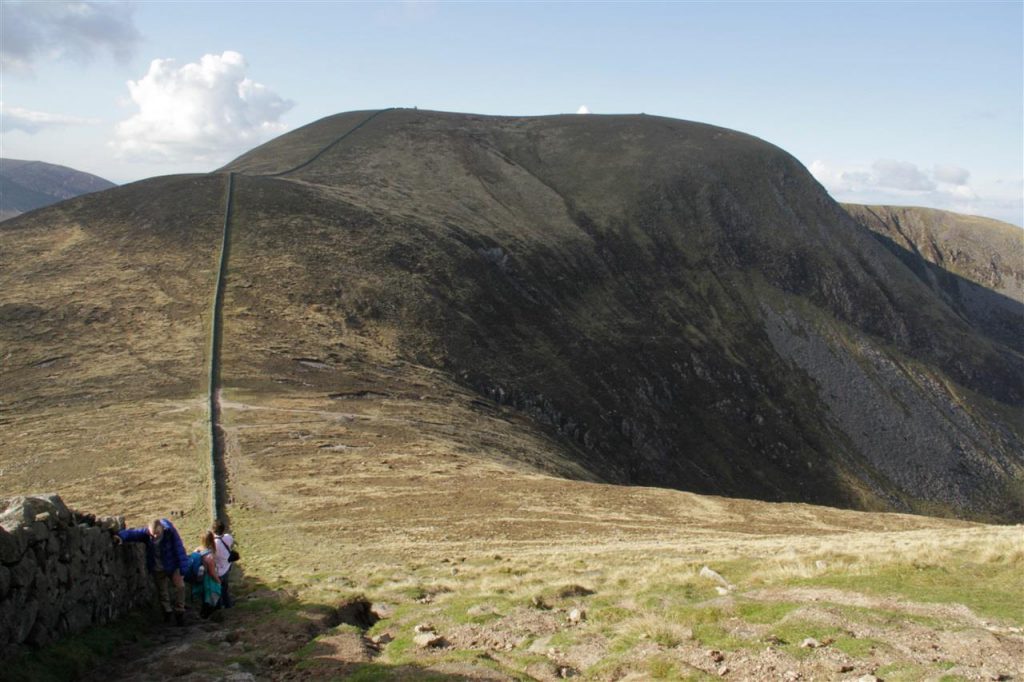 There are toilets and good parking at Donard Park, which is on the outskirts of the town of Newcastle.

This is a moderate to strenuous walk, but it’s not too technical or difficult. Although the hike is steep in parts and can get muddy, it’s fairly doable for most people with a basic level of fitness. Some people choose to walk along the top of the Mourne Wall to avoid some boggy sections, so it depends if you’re comfortable with that!

Slieve Donard: What to look out for?

Despite the hugely impressive scenery in the Mournes, one of the area’s most impressive features is the Mourne Wall. The granite dry stone wall, which is 1.5m high, extends across the mountain range for 35km crossing 15 different mountains. It was built between 1904 and 1922. Some people set themselves the challenge of walking along the entire route of the wall, which is not easy!

It was constructed to contain the water catchment or reservoir in the Silent Valley by the Belfast Water Commissioners. It also works to keep farm animals out of the reservoir and local rivers and contains around 9,000 acres of farmland.

As with anywhere in Ireland, the weather in this mountainous region can be very changeable. Be aware that as you climb any mountain, the temperature drops around 1 degree for each 100m of ascent. That means that even in summer, it could be chilly at the top so bring plenty of thin, warm layers. Winds are also stronger as you climb higher, and can be two or three times the wind speed in the valleys.

If the weather is too severe to tackle the mountain, the nearby Tollymore Forest Park has a range of great walks through its forests and along the Shimna River and is well worth exploring. They range from a path of less than 1km to an 8.8km mountain trail so plenty of options. 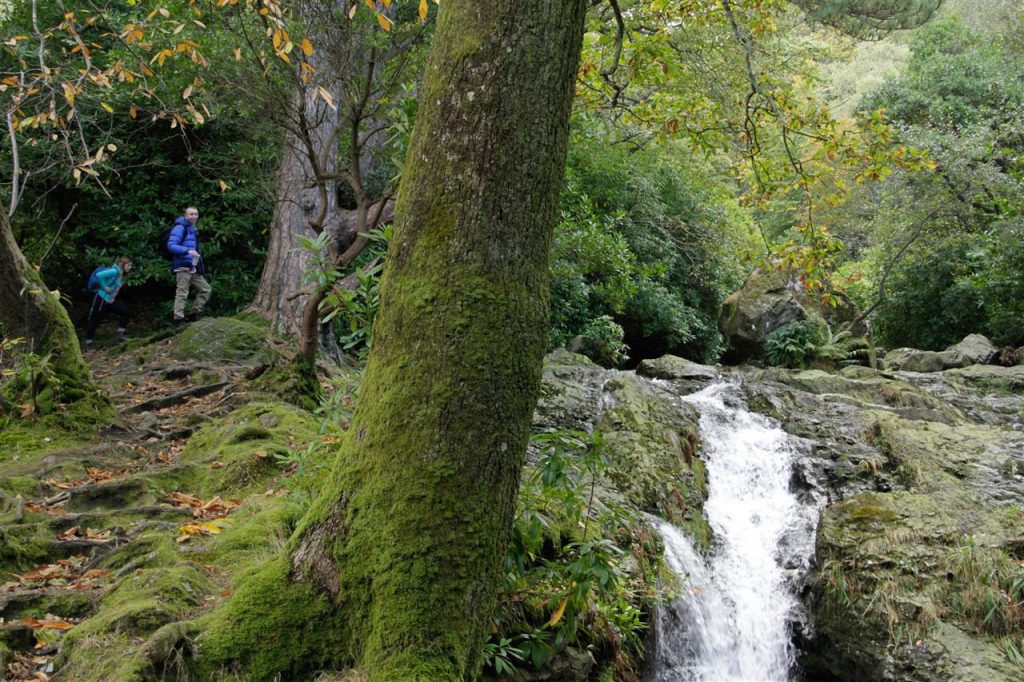 Like most hill walking in Ireland, you’re best to bring equipment for all seasons even if you’re hiking in summer. Extra layers are vital, with thin merino wool lovely and warm and light to carry.

Rain gear is also essential (top and bottoms) even if the weather forecast looks good. In summer, don’t forget your sunscreen and a hat and over the winter months, it can be quite icy with snow on many of the Mourne’s peaks so check the weather before you leave and be prepared.

Also, don’t forget to bring a good supply of food and water, make sure your phone is fully charged. And it’s always good practice to bring a compass and map just in case – and to know how to use them!

Slieve Donard: How do I get there?

Driving north from the Republic is no hassle these days with the direct M1 motorway. Simply exit the motorway at Newry and take the lovely coastal A2 road through Warrenpoint and Newcastle. You’ll be rewarded en route with gorgeous views of Carlingford Lough on one side and the Mournes on the other. The Glen River route leaves from Donard Park on the outskirts of Newcastle town.

To access the Glen River route up Slieve Donard, you’ll need to travel into Newcastle and park in the Donard Park car park. The car park for the Bloody Bridge route can be found around 5km before the town of Newcastle.

Wild Camping Spots in Ireland: 13 of the Best