English athlete, strength coach and adventurer Ross Edgley attempts to swim from Martinique to St. Lucia while pulling a 45kg log. And it did not go smoothly!

If ever an insane idea pops into your head, and you quickly quell it with a ‘don’t be silly’, well then you are not Ross Edgley. Because by the looks of it, every mad (yet ingenious) idea that enters his head becomes a reality. The English athlete, strength coach turned adventurer has completed a marathon while pulling a Mini Cooper (in 19 hours), completed the world’s first Tree-athlon (an Olympic Distance Triathlon carrying a 100lbs tree) and climbed a rope the height of Everest (8,848m). And just last month he did a non-stop 48-hour, 100km swim at the Royal Marines Commando Training Centre in Devon.

Ross doesn’t have the body of your typical open water swimmer (he looks like a bodybuilder) but that hasn’t deterred the 32-year-old. His latest obsession is Strongman Swimming, basically swimming while pulling a tree behind you! In November, he became the first man to attempt a 40km swim between the Caribbean Islands Martinique and St. Lucia whilst pulling a 45kg log. And it was not plain sailing, Ross ended up battling insane currents, causing him to swim over 102km and spending 31 hours and 24 minutes in the water and still not reaching land! The challenge was documented in a Red Bull Media House four-part series. Read on for a snapshot of his adventure… 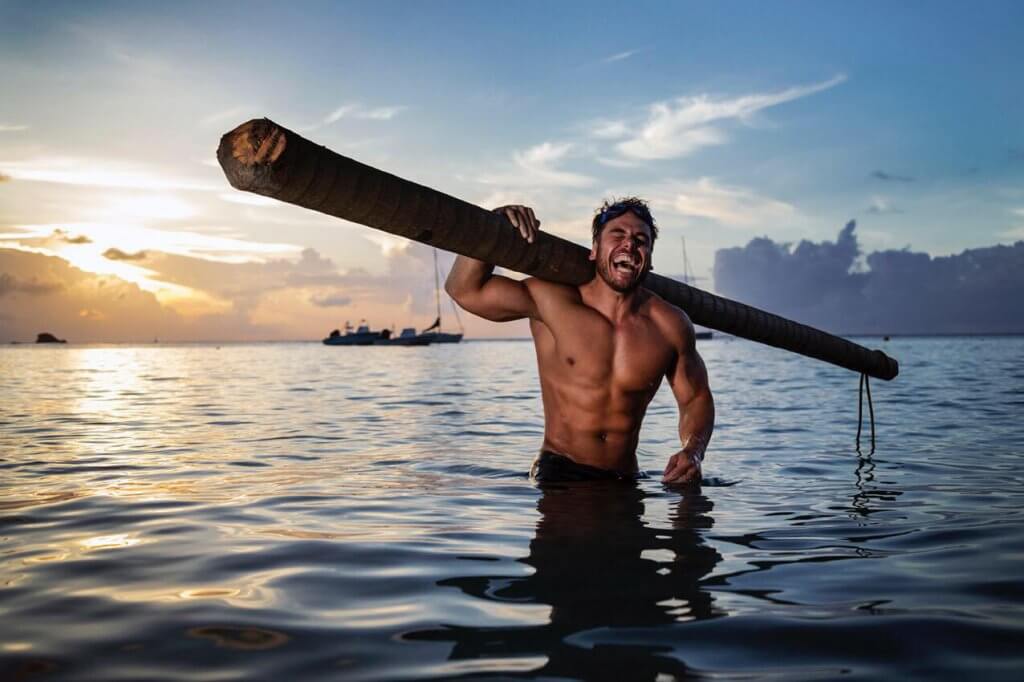 In the Caribbean, I was dealing with salt water and 5ft waves. Salt water makes you more buoyant, but you get salt mouth where your tongue and your throat swell up so you cant really drink anything. There were all these variables to think about.

I had to consume a lot of food. Up to 15,000 calories on a big training day. As soon as you add a tree everything becomes amplified.

My physique is not made for swimming. I was told to lose 13kg of muscle but in the end, I just didn’t listen to them.

When you are feeding across the Caribbean, you cannot touch the boat, you can’t get out of the water so you’re just treading water while you eat. The basic requisite was high in carbs, with a little bit of fat that I can consume within seven seconds. Seven seconds is about the time it takes for the next wave to break on top of me. One of the things that we found was that energy gels were too small because there are 30grams of protein in each one so that’s not going to last me too long. We ended up creating these food bags and just filling them with curry and rice or rice pudding and I just bite the corner of it off and basically piped it into my mouth.

Training wise, for basically an entire year it was just about volume. I swam as much as possible. I used to do 10-20km for breakfast in the local pool. It’s a very different sensation swimming with a tree but obviously, you can’t show up to your local pool with a tree. So with the tree, I used to train in Lake Windermere, the Lake District and with the Royal Marines down in Devon.

Swimming for this length of time does weird things to your body. I did a swim in January with the Royal Marines where I swam for 48 hours non stop covering a distance of 110km.I got trench foot from been in the water so long. After 36 hours I started hallucinating and my digestive system started to shut down. Your energy pathways (your abilities to use carbohydrates and sugars) start to be impacted. It was two o clock in the morning and you’re in a real hole where you’re thinking I don’t want any more food, I just want my bed. My hands were badly swollen and they looked like they belonged to a dead person. 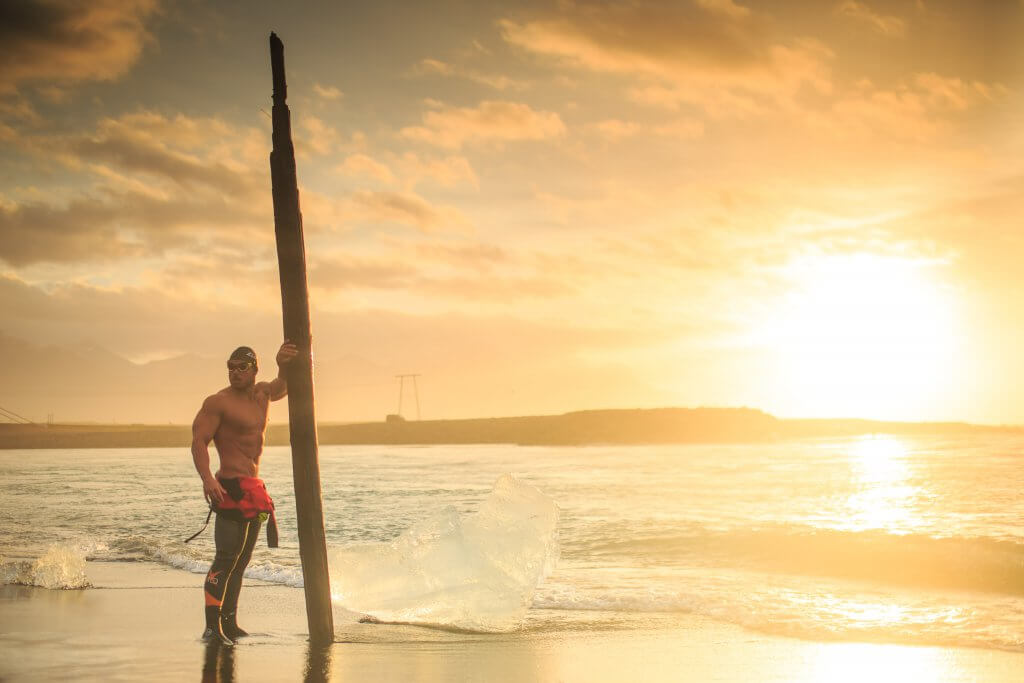 My physique is not made for swimming. I was told to lose 13kg of muscle but in the end, I just didn’t listen to them. I had a body scan and they basically said I had no physical attributes to be a good swimmer. I’m tiny, I’ve got dense bones, they even said I’ve got a big, dense skull which basically weighs me down. To this day I still think my muscle mass was an advantage and that’s why I would love for people to watch the Red Bull series and go, ‘Wow, I was told I was too short to be a swimmer’ or ‘I was told that I didn’t have the right body shape’. It’s only the wrong body shape if you think it is. If you think it’s an advantage then it can be. I’m doing it for the underdogs, if someone tells you can’t do something, well that’s conventional wisdom I’m going to basically write my own blueprint.

I ended up swimming over 100km and still didn’t touch the beach, so I was unable to swim from point to point despite swimming over double the distance. I think the Red Bull Media House series does a brilliant job of showing that. There’s a point in that final film which you will see the Captain saying, ‘Ross, you are in a really bad current you need to swim really hard’ and I’m like ‘Ok, no problem’, I put my head down and swim, and I’m about 40km in at this point so I’m really quite tired but I swim hard for three hours and in three hours usually I can do 10km. I pop my head back up after the three hours and I was like ‘ok, how are we doing?’ And he couldn’t look me in the face, he just said, ‘Ross you’ve not moved, you’ve been in the same spot for three hours’.

I just realized that you can complain and you can feel sorry for yourself but it’s not actually going to help in any way.

I obviously had some quite colourful language after hearing that. We were arguing back and forth and I just remember Vincent the Captain just looking at me and saying, ‘Ross, the whole time we’ve been arguing, you’ve moved back 600metres’. So at that point, I just realized that you can complain and you can feel sorry for yourself but it’s not actually going to help in any way.

After the crew pulled me I thought I’ve got to go again. I’ll swim back the other way. The decision was made and again on attempt two I got to 41km and then the currents started pushing me way out to the Carribean sea. The irony was, the goal was always to do something incredible and for me to swim from one island to the other would have been incredible and I didn’t do that but weirdly by trying to do that I did something quite cool.

For about 5-10km I had a group of dolphins swimming directly underneath me. They just swam on their backs and were blowing bubbles in my face.

I originally wanted to do the English Channel. I rang up the coastguard saying that I wanted to swim it and they were like, ‘that’s absolutely fine. Here’s the paperwork, we’ll send it to you to fill out’. But then I mentioned towing the tree. And the person on the other end of the phone said, ‘well you are not allowed because you’re not a registered vessel’. And I asked them how do I become a registered vessel. And the phone line went dead, he had hung up!

Joe Barr: the highs and lows of endurance cycling

I’ve been speaking about all the bad stuff but there were moments there that were just incredible. For about 5-10km I had a group of dolphins swimming directly underneath me. They just swam on their backs and were blowing bubbles in my face. Some whales came to visit us. There were times at night that the stars were so clear that you got to see shooting stars overhead. And things like the sunset, to see it out at sea with a tree attached to your trunks is pretty cool.

To watch the full series of Strongman Swimming check out the Red Bull website or watch it on YouTube.

Feeling inspired? Take a look at the links below:

Watch: How to Workout Like Enduro Mountain Biker Greg Callaghan