Each year, hundreds of tourists flock to the Andes to take part in expeditions that reveal an awe-inspiring, ancient world previously unknown to them. But, behind the curtains of the multi-million dollar Peruvian tourist industry lies an ugly truth kept quiet by the money-hungry agencies hoping to gain capital by discriminating against women and cutting corners on employee treatment.

For decades, the porters of the Inca Trail have been carrying more than just tourists’ packs — they have been carrying the whole of the Peruvian tourist industry on their backs. But, in the male-dominated industry, women have never been given the chance to prove their worth as porters on the trail, until now.

Employed by Evolution Treks Peru, five women have just become the first female porters to ever trek the Inca Trail. Evolution Treks is a travel agency determined to not only create equal opportunities for men and women in the workplace but also to uphold the basic employment standards and needs of porters everywhere.

“I always believed that if you create a business, it has to have a purpose, it cannot just be money driven,” says Miguel Ángel Góngora Meza, director and co-founder of Evolution Treks Peru.

Witnessing and experiencing first-hand the injustices dealt out to the porters on the Inca Trail, Góngora, along with Amelia Huaraya Palomino, Evolution co-founder and general manager, began formulating a plan to battle the mistreatment of the local porters.

According to Góngora, in many travel agencies, porters are subjected to unfair wages and abysmal living conditions while on the trail. Insufficient tents leave them wet and cold when it rains, feeble sleeping mats leave them sore after an unrestful night, and leftover food scraps leave them hungry and unsatisfied after a long day of hiking.

“I’ve been guiding tours for over 20 years now and the only thing that has changed in 20 years is that the porters have been given uniforms,” says Góngora. “So, for a tourist, it looks like … they are being treated well. But, behind the scenes, it’s obvious that they are not being treated fairly …  It’s the elephant in the room. In this case, it’s the elephant in the tent.”

Evolution believes that if you want to change the industry, you must first change your agency. That is how Góngora and Palomino came up with their Women Empowering initiative, aiming to hire local women to be the first female employees to be hired to work as porters on the Inca Trail.

“Evolution is more than a company. For me, it is family,” says Lucia Merclajuly Vela Sosa, one of the trailblazing women who trekked the Inca Trail as one of the first female porters to ever work the route. “It is difficult to find people who have the same idealistic vision, dreamers who want to improve the world. We are not a company, we are the evolution of thought.”

Lucia, a 28-year-old single mother of two living in Cusco, heard about the opportunity to become a porter through her friend who was offered the job by Góngora. Góngora had gone to the local villages in Cusco to recruit female porters for the initiative, offering them steady work that would bring in more income than a normal job in Peru.

Discrimination allows for diminished access to paid employment for women, and due to the patriarchal views in Peru that indicate that a woman’s place is in the home, poverty is a major concern for Peruvian women. As a porter with Evolution, the women (who are paid the same as the men) make about 70 USD for two days of work, plus tips. That is more than double the amount of money that an average person would make in that time in Peru.

“I saw that proposal as an opportunity to learn something more … I did not think twice about saying yes,” says Lucia.

When the women finally hit the Inca Trail for the first time with a tour group, they received a mix of feedback — everything from backlash and disapproval to praise. As they walked, sexist jokes from fellow males in the porting community and the surrounding communities followed, with statements such as “you should get back to the house,” and “go back home and cook.” Nevertheless, the women pressed on.

“I feel proud, not only because now my body is stronger, but also because I have the motivation of other women here, who once believed themselves to be weak and did not realize that despite everything going against them, they still stand,” says Lucia.

There is a point on the Inca Trail that comes during the second day of the hike and is known as one of the most difficult features of the trail to cross. At 4,215m, Dead Woman’s Pass is the highest point on the trail, nearly 1,800m higher than Machu Picchu itself. The name affirms the patriarchal Peruvian belief that women are not strong enough to conquer the rocky, unforgiving terrain. But, the women of Evolution proved the name wrong — facing the challenge head on and emerging victorious.

Not only did Evolution receive backlash from the surrounding communities, they also have been fighting with the park’s rangers to work for the basic rights of the porters. The agency has been fighting for proper tents to be given to the porters, along with comfortable sleeping mats and adequate meals. The arguments are intentional, because according to Evolution, if there is a debate, there will be change.

“It’s just fair. We’re talking about something that seems revolutionary, but it’s just the basic thing to do.”

“This is a conscious move. We are doing this because we are going to force them to change,” says Góngora. “It’s just fair. We’re talking about something that seems revolutionary, but it’s just the basic thing to do.”

Lucia sees it as a way to not only train her body, support her family, and pay for her studies, but also as a way to learn about the world and push her boundaries as a woman.

“I am convinced of the mission and vision of Evolution Treks. So many of their ideals are my ideals and I can be part of making them real,” says Lucia.

The women of Evolution Treks Peru have broken down a major barrier in the tourism industry of Peru and of the world.

Góngora’s next goal is to create a union of female porters in Peru, so that future women will not compromise on their basic rights in the industry. Until then, the porters of Evolution Treks Peru will continue to shatter the stereotypes surrounding female employment in Peru.

Inca Trail permits for 2019 are on sale now. Get your permit and book your trip to Peru at Evolution Treks Peru. 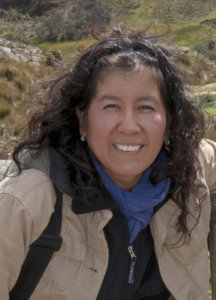 These photos are courtesy of Flor Ruiz, a Peruvian freelance photojournalist specializing in travel, nature, adventure, and conservation photography. She studied Communications at the University of Lima and has since turned her attention to capturing the essence of the Peruvian landscape through photography. Her photos can be seen in the book 30 Routes of Qhapaq Ñan (2016) and have also been exhibited at the Larcomar Art Gallery in 2017.

British Ultra Runner Stops to Breastfeed While Competing in UTMB

British Ultra Runner Stops to Breastfeed While Competing in UTMB