How a bottle of water changed my world | By Breifne Earley

In the dry Indian heat, the wet jersey stuck uncomfortably to my back with my own sweat. I’d been on the road early, rising an hour before the sun to try to get ahead of the high midday temperatures I knew were coming. A relatively straightforward three hours in the saddle had taken me to the foothills of the Western Ghat mountains, which run the entire length of India’s west coast.

Hours earlier I’d struggled to find breakfast, having to settle for a cup of tea as I just couldn’t stomach the only option available for breakfast, which looked as if it had been served to Oliver Twist in a former life. I was beginning to regret my choices now as I struggled to keep my energy levels high enough to stay upright on both wheels of my bike. 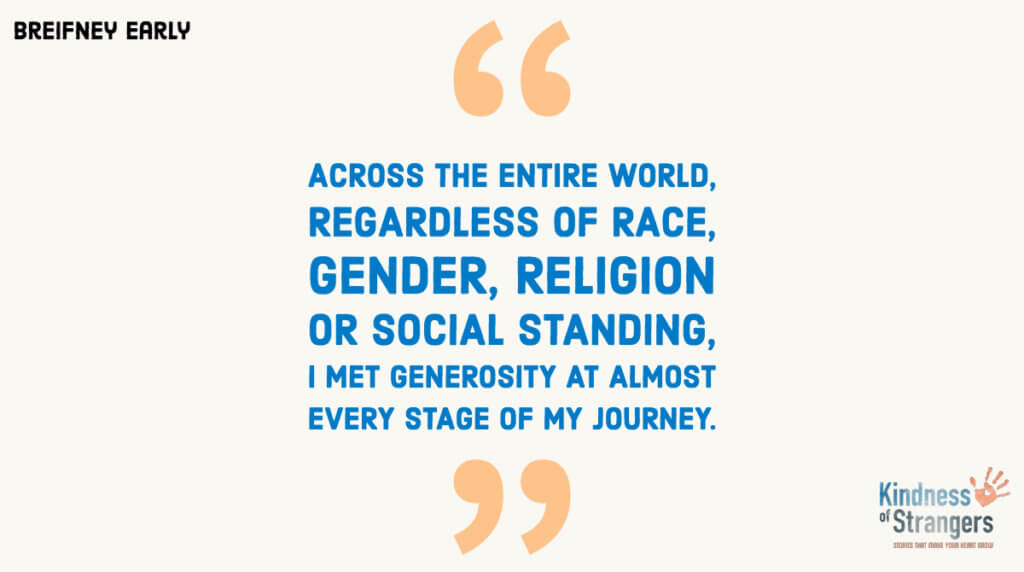 Eight weeks earlier I’d left my home in the north-west of Ireland with the intention of cycling around the world, and entered the World Cycle Race. Now, after injury, visa issues and a disqualification had claimed my competitors, I was the only remaining rider in the race, the most unlikely leader of a bicycle race ever seen. I knew that all I had to do was stay in the saddle, observe the rules of the race and eventually when I circumnavigated the entire globe and returned to London I would be the winner of the longest sporting event on the entire planet.

As I stared up the road ahead of me, into the mountain pass which would eventually lead me to Bangalore, almost a kilometre above sea level, I could only think of the reasons why this was crazy. I wasn’t an athlete, I had only been cycling a few years and had never been part of a cycle race before. I didn’t speak any of the local languages, I wasn’t able to cope with the midday heat and the climbs were unlike anything I’d ever seen before – higher than anything I’d conquered in training, double the height of any road in Ireland.

As the time on my Garmin device kept ticking ever closer to noon, the temperature display just kept rising. Past 30°C and then on into the forties. My mind was racing, thinking about the consequences of turning around. I knew the cool air-conditioned room and comfortable bed I’d left at 5.30 that morning was still there at the base of the mountain, some 30 kilometres downhill. Downhill – I wouldn’t even have to pedal the bike, no effort would be required; I’d simply just have to turn around and allow gravity to apologise for what it had put my legs through already that morning. My food and water supplies were long gone and now my body was overheating and starting to rebel against my mind.

I allowed my mind to wander further west, back to my hometown, where ‘Sure I got all the way to India!’ might suffice as a response to anyone who mentioned my attempt to cycle around the world. ‘It’s further than any of you expected I’d get! I was the last man standing in the race – sure I might as well have won the race.’ Just a day’s ride further back, past that cool motel room, was the airport in Mangalore, where sure I’d be able to go home and still save face with my friends, family and neighbours – anything that got me out of this heat, the sun and these damn mountains.

I had no idea where my next refuelling spot might be. The maps I was using showed no town for another 20 miles and a lot more vertical distance to cover. The regular shanties selling water and snacks on the side of the road had become a thing of the past, not having seen one in over four hours since just after daybreak. But despite the appeal of turning around and heading back to comfort and familiarity, something inside me made me push on. The heat and low energy levels finally got to me, though, and I was resigned to pushing the bike ahead of me as I trudged up the hill when the miracle happened.

Read the rest of Breifne’s chapter in the book The Kindness of Strangers. The Irish book launch takes place on Thursday 25 of October @ 8.00pm-9.30pm at the Patagonia Outlet Store, 24 – 26 Exchequer St, Dublin 2. Tickets are just €10 and you can purchase them here.

GET YOUR TICKETS HERE

Have you listened to our awesome podcast?

Caroline Heffernan: Overcoming the Odds to Complete an Ironman

Caroline Heffernan: Overcoming the Odds to Complete an Ironman