Uamh Nan Claigg-Ionn. It’s an intimidating mouthful. Translated from Scots Gaelic it means Cave of Skulls and is Scotland’s deepest cave. Andy Torbet takes us deep within as he tries to explore its underworld. But has he bit off more than he can chew?

The depths of a Scottish Highland winter may seem an ill-advised time to embark on exploring the submerged passages of Uamh nan-Claigg ionn, the Cave of Skulls, Scotland’s deepest cave. But I had a lull in my diary and, besides, after dragging my kit down five vertical drops and numerous constricted crawls, I’d be convincingly ‘out of the wind’. 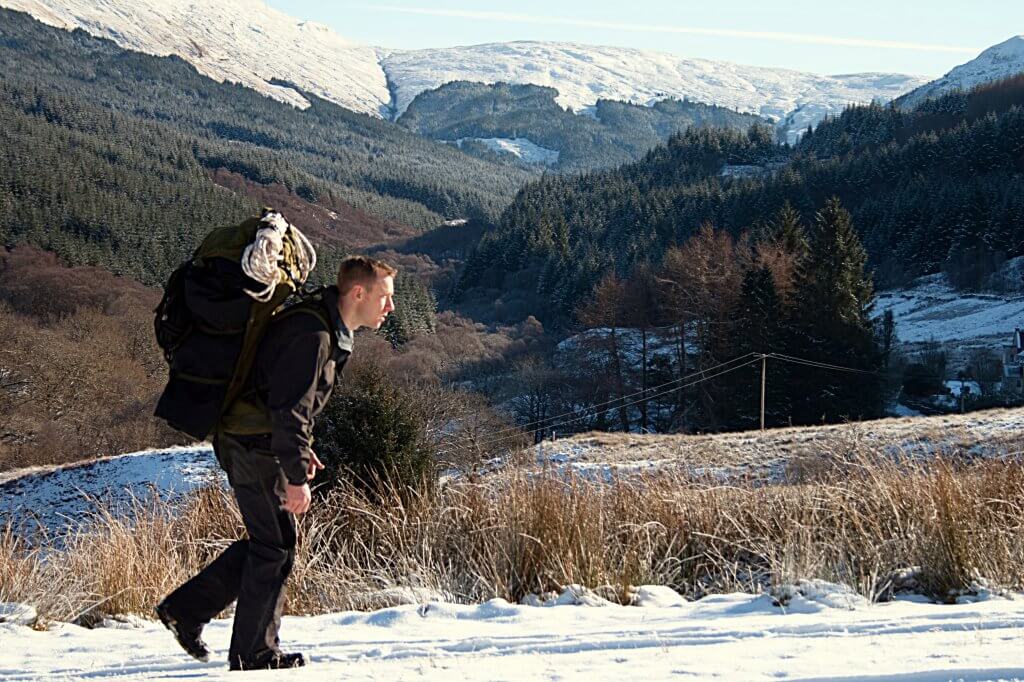 Cave diving in Scotland is like most of the UK, specialising in tight, serpentine crawls, long abseils and muddy water (or watery mud). And the sites are normally a bloody long way from the car. There aren’t many fat UK cave divers.

We were filming this little jaunt for the BBC’s Adventure Show. The plan was for Stu Keasley to film me up top in the initial section and I’d self shoot on a small hand-held inside the rest of the cave system. I had to carry one of the heaviest rucksacks of my life – twin seven-litre cylinders; a side-mount harness; a climbing harness; 105m of rope; torches; reels; abseiling, ascending and anchoring kit and my camera – about 60kg in all. Fortunately, it was only about a mile-and-a-half from the end of the nearest road. Unfortunately, it was winter, the road was blocked, so it was two-and-half miles…uphill. 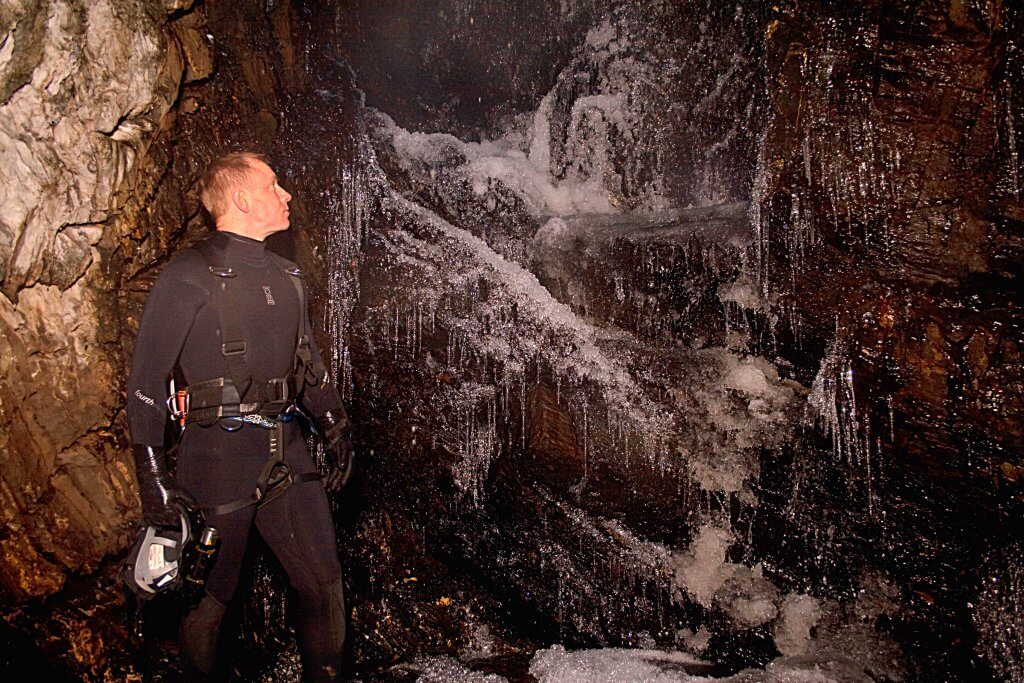 I’d investigated a few other sites the day before so, after Sherpa-ing my load up through the snow, I was gifted the opportunity to pull on a partially frozen wetsuit whilst simultaneously blaspheming enough to offend most major religions. Finally kitted up, it was time to descend into the underworld.

The entrance to the Cave of Skulls is a large cavity in the ground, overarched by an eldritch (what’s an eldritch? is it a type of tree?), a gnarled tree with beards and bunting of moss and lichen hanging into the icicle-encrusted darkness. Once I abseiled down and entered the system, I could feel the rise in temperature as the warm earth enveloped me. The first awkward bend and low crawl brought the reality of my predicament. It was impossible to drag or push all my equipment in one go so I’d have to shuttle, re-doing each section four or five times. The first crawl is followed by two abseils, with one of the most awkward take-offs I’ve ever encountered.

Up to this point it had been narrow rifts, low crawls and small spaces. That all changed after the second abseil. I sidled through a narrow crack and stepped out into an immense cavern. I was standing on a boulder-strewn ledge half way up its walls. The roof soared above me, tapering to a point, as the ground fell away into a shallow plunge pool. Anchoring the rope and strapping all my kit on, I swung out into the abyss. I find myself abseiling on a near-weekly basis but never with this much weight on. I treble-checked the anchor points before I took a deep breath and that first small step.

This vertical descent was followed by the House of Cards, so called because slabs of rock, shaped like giant playing cards, have fallen from above and become precariously wedged against one and other at convoluted angles, leaving only a low, narrow space beneath. As I heaved and slithered through the gravel and water I kept reminding myself that the chaotic structure above me had probably stood for centuries and wasn’t likely to move anytime soon. “Are you sure?” said the voice in my head, “Besides, Torbet,” he went on, “I’m no expert in geology, so neither are you!” 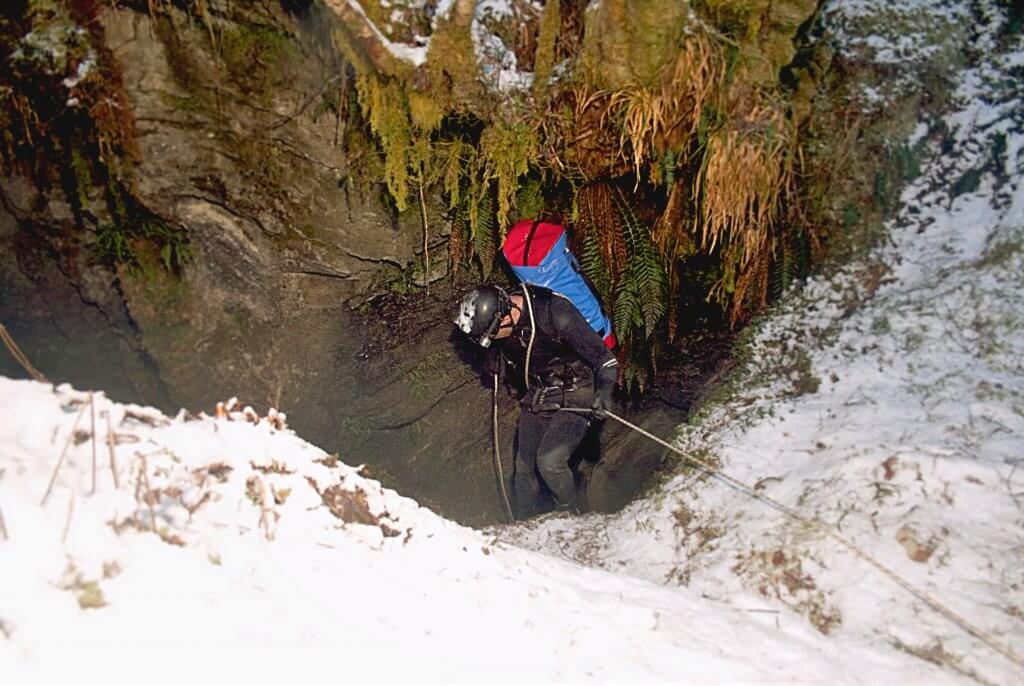 Safely through, and having shuttled all the kit, I came to the last two abseils. Not the longest, but the most fun. The first was down a short waterfall into a thigh-deep plunge pool and the second has you lowering yourself down through an hourglass effect. It starts spacious enough before narrowing to a point where you’re forced to turn your head to the side and bounce to get your chest and backside through before flaring out wide again. Finally you reach the bottom of the cave, but, if you’re a diver, not the end.

Reaching the first sump required me to slide through an extremely low crawl. Unfortunately this had been made considerably tighter by the gravel, silt and debris washed in over the winter. The height was less than 25cm and water covered the lower 15cm, and I am not built to cave.

Too many years rock-climbing and carrying large rucksacks up large hills means I don’t possess the wiry, whippet, racing snake physique of the hardened caver, so I got stuck.

Wriggling my way backwards I began excavating some of the larger rocks and gravel, trying to plough a furrow deep enough for me to squeeze myself through. With people waiting for me at the surface and overdue on my return time, I had to leave, having failed to even reach the dive site. Morale was low. It was not aided by the thought of having to haul myself and all that kit, back out of that hole. 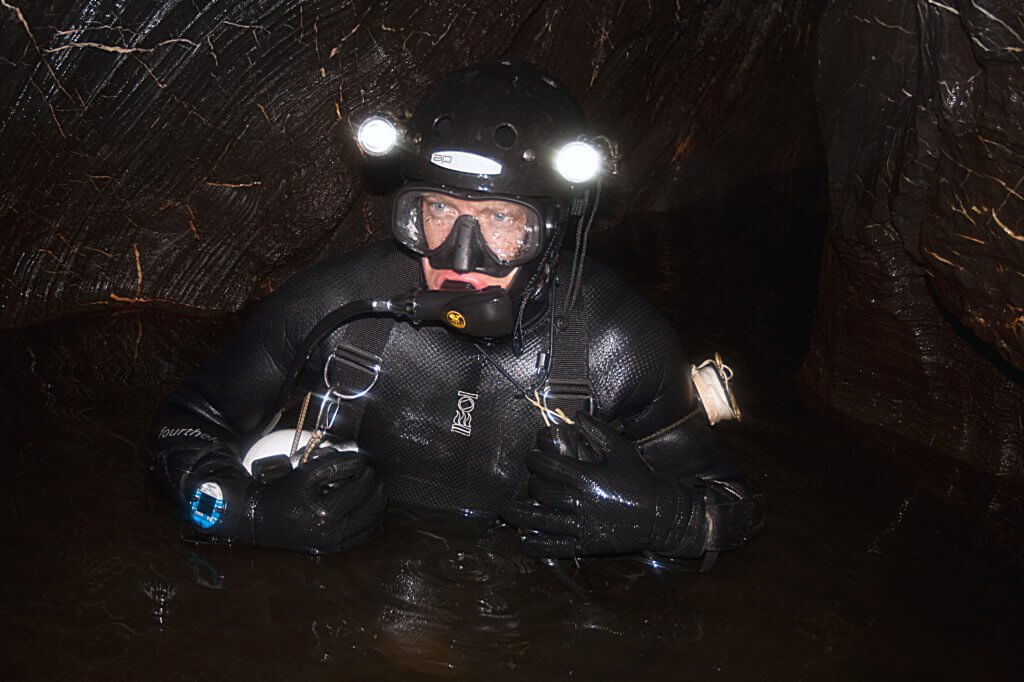 On reaching the surface, I was exhausted and the effort of bringing up all the equipment on my own had done little to improve my mood. I had said I would dive the limits of the deepest cave in Scotland. Failure.

Fast forward to June: Having driven through the night, I find myself kitted up at the entrance once again. Alone this time, with no cameras or filming to slow me down, I’ve exchanged my twin sevens for twin threes. I have one day. This will be like an alpinist ascent, fast and light. Knowing the layout and with only myself to worry about, I fly through the cave and find myself at the passage that stopped me last time.

Head torches: 6 of the best

I dig and try to push through but keep getting stuck. I have to back out, dig more and try again. Each time the cold water burns my ears as I twist my head from side to side trying to breathe. Finally, I can see the end; I’m sure I’ve done enough and force my way on. Inches from where the crawl opens out I stop. One push, a hard push, should see me clear. I take a deep breath, plunge my face into the icy water and push with my legs, pulling with my arms… I’m stuck. I push harder – nothing. The voice was back, “What are you going to do now, Torbet?”

Then I have an epiphany, the kind that has you slapping yourself on the back for your intellect in solving your current dilemma only to realise a slap in the face would be more appropriate as the solution is so blindingly obvious the problem should never have occurred in the first place: I breathe out, forcing the last of my air away, feeling my chest contract…and slip through. 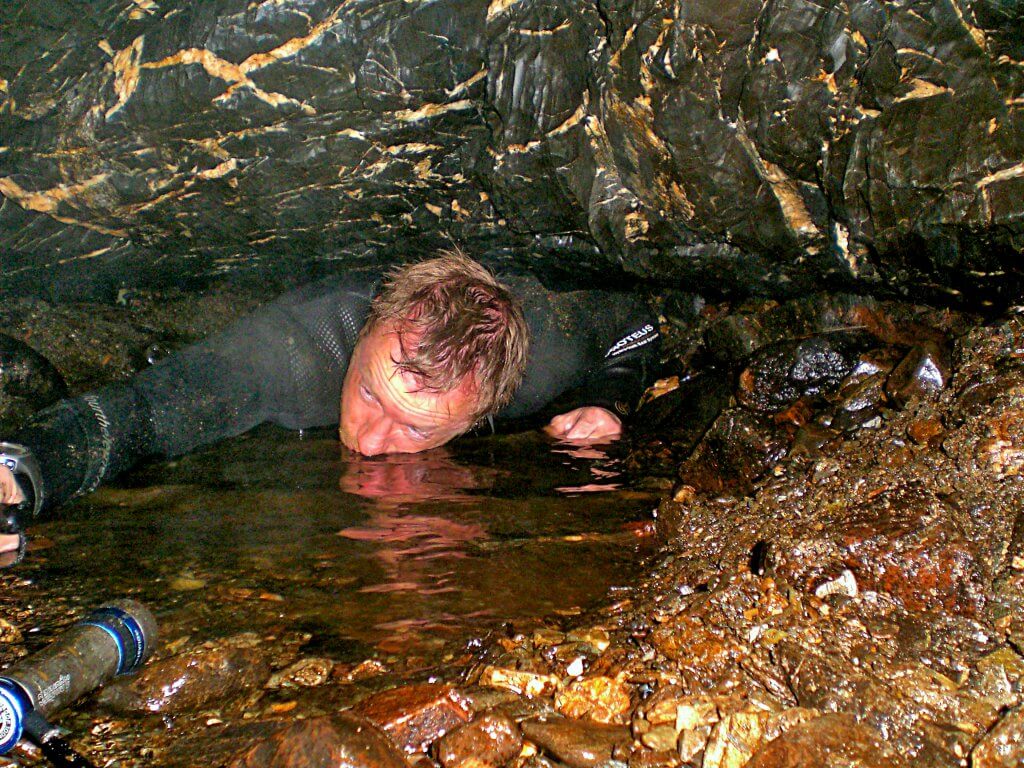 After lugging the last of my gear, bent over double, along a low tunnel I reach the first sump. It’s a short, shallow U-bend and the silt washed in leaves me with only enough clearance to slip through on my belly. The final stretch is a smooth, wet, low passage that opens into a larger rift just before the terminal sump.

I should feel enthusiastic and excited at this point but to be honest I just feel tired. I want to get in, see how far I can get and start the long haul back to daylight. I force myself to focus, slip into the dark waters and immediately feel the space around me constricting. I pushed less than a few metres in before the passageway narrows and became impassable, forcing me to do a feet-first withdrawal.

I am the first person to pass sump 1 since Alan Jeffrey’s first attempt in 1976 and the first to ever dive sump 2. At last, success.

This article originally appeared in Subsea, Ireland’s only diving magazine. Visit their website for more information on Subsea.

Finding Solace Through the Sea