Outsider’s mountaineering and hiking editor Declan Cunningham looks to uncover an overlooked hiking spot in the South East – but the weather tells him who is boss. Here Declan tells us all about his experience of hiking Mt Leinster.

Occasionally I am lucky enough to get a walk in mid-week. The only drawback is that company can be scarce. The flipside of this though is that I get to choose exactly where I’d like to go and besides I’m rather partial to my own company!

With such great walking areas all over Ireland, it’s easy to be attracted to the bigger hitters like the McGillicuddy Reeks in Kerry or The Comeraghs in Waterford but this time I was keen to visit an area that was within reach of Dublin in a day. With recent enough trips to the Slieveblooms and the Mournes, the Blackstairs, or to be more precise Mt Leinster on the borders of counties Carlow and Wexford, was the obvious choice. 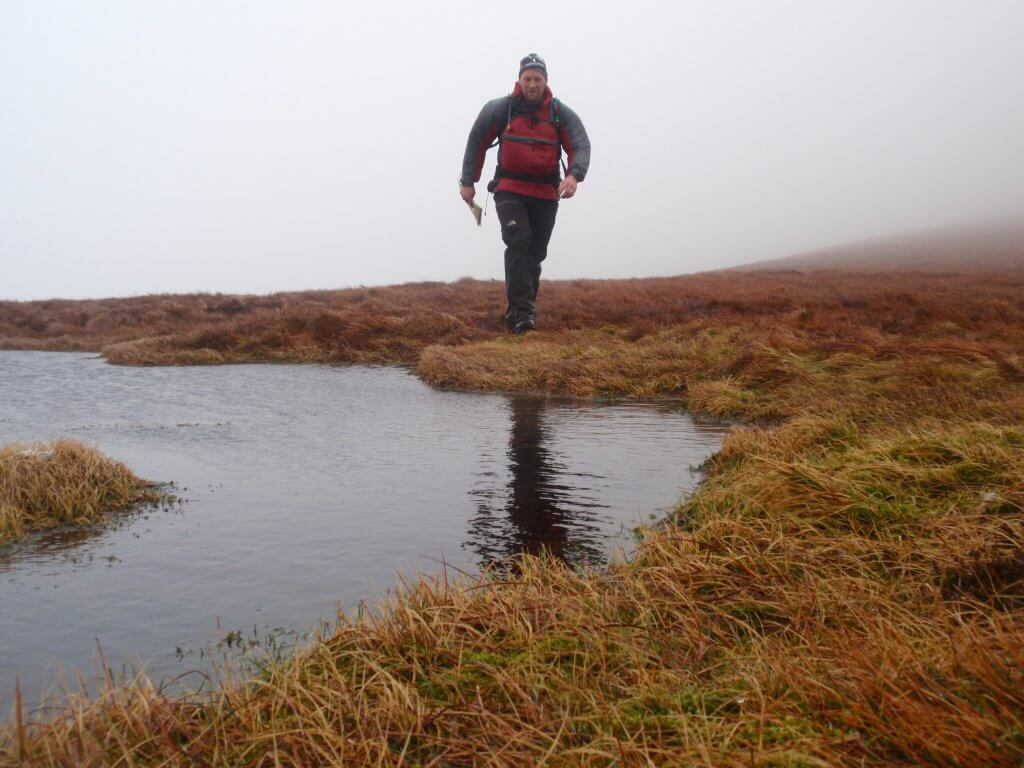 Studying the map to select my exact route and a place to park it was hard not to imagine what the place is going to be like. Looking at the little tracks and roads, I wondered how easy they would be to pick up when coming back that evening. Of course, no more like the film that follows a book, it’s never quite like you imagined it but those differences are the true life and character of the place.

The sun had been trying admirably to break through as forecasted on the drive down but I was pretty certain it wasn’t going to win out this time around. Far away hills may be greener but in this case, the closest ones were very grey indeed. I had a looped walk in mind so decided to leave the car in Ballycrystal which is near Bunclody.

As I was booting up, my view south was limited by the impenetrable cloud layer above and only the little rounded hills of Cloroge Beg and Cloroge Mor could be easily seen. I figured the tracks from the south would be easier to pick up on my return so I headed northeast and picked up the track towards Black Rock Mountain for my first objective. There are several possible start points around Ballycrystal so depending on where you park you can use forestry tracks to access the hillside easily enough.

A meandering trail will lead you to the saddle below the little peak but I opted for the more direct route through the heather. Skeletal trees emerged from the mist, adding a bit of atmosphere to the place but the stony windswept 604m peak and its cairn weren’t that inviting in the cold and mist.

A scrappy trail leads west to a little col where there are a number of markers and even an old house simply referred to as ‘barn’ on the EastWest map. It looks like an old farmhouse and while it’s not exactly liveable, it would make for welcome shelter from the weather had I been deserving lunch at that stage.

Without a view to hold me it was back to the trail which disappeared into the vapour. The little rocky outcrops known as the ‘Moats of Craan’ cut some odd shapes in the shifting cloud. As I gradually gained height towards Mt Leinster I was wondering just what the surrounding views were like when a fleeting break in the misty air suggested my fortunes might change but it was just a tease and the green fields of Carlow were hidden from me once more.

6 of the Best Waterproof Jackets Money Can Buy

The trail was solid enough for the most part but there were sections of boot sucking bog on occasion that you’d want to step lightly on. As the trail climbed, the wind picked up too and I wondered if I would ever see the top or the 122m mast that adorns it. Of course it had to be there somewhere but what was surprising is that I HEARD it before I got so much as a glimpse of it.

The wind was at gale force at this stage as I struggled upwards. The sound of the wind had changed now and all I could hear was the gale blowing through the mast. It was like some delinquent librarian’s constant request for a silence that would never come.

Finally, I saw the metal work emerge and a single white light that penetrated the gloom. It was amazing that I could get to within a 100m of something so big and have it totally obscured from view. Judging by the cars in the compound there were riggers busy in the cabins as this was no day to be anywhere on the mast itself.

A service road leads all the way to the top and it is often used for a visit to the top of the fifth highest peak (793m) in the province of Leinster after a visit to The Nine Stones to the north. They are worthy of a visit but I don’t like to use a road to climb a mountain and my trail lay elsewhere today.

The wind-chill meant it was Baltic at the summit but I was grateful it was only big cold drops of water that were dripping from the mast and not ice. I made a hasty visit to the cairn and memorial before turning south towards Stoolyen. Despite the lack of views I was still enjoying myself and had plenty to do to navigate off the hill. It was well after lunch at this stage but with the howling conditions the sandwiches were well forgotten – if I could keep then so would they.

I picked up the tracks by Wicked Corner where the spin cycle I’d been in finally abated. The cloud didn’t so much lift as thin enough to allow me a sneaky peak across the Scullagh Gap towards Blackstairs Mountain itself. I could almost picture the great plains beyond, the forest clad slopes of White Mountain and the silent bends of the great Barrow river…almost.

Now I set my sights on the last objective of Knockroe (542m) which was a little out of my way. It would offer great views over the Scollagh Gap on a better day but my interest lay in some of the monuments, both manmade and natural that are littered over this little hill. There is the Round House at the summit, the Holy Year Cross and the Giant’s Table to name a few. The EastWest Map shows so many others that it would take a while to visit them all.

I’d pushed my luck quite as far as I’d wanted at that stage so it was time to find my way back to civilisation. Old walls and ruins made for some interesting navigational legs back to the track and the warmth of the car.

The ephemeral glimpses through the cloud that I did get that day were like the trailer for a movie I wanted to watch. Of course, I already knew there was so much more to see and with Blackstairs Mountains still expecting a visit from me, there was always going to be a sequel.

5 of the Best Mountain Biking Gloves

5 of the Best Mountain Biking Gloves