Imagine not just one mountain range to yourself but two? That’s what you get when you visit the Comeraghs in Munster as these impressive peaks lie side by side with their sister range of the Monavullagh Mountains. Great glaciated table top peaks, the relative easy ground of the boggy summits are a stark contrast to the jagged ridges and precipitous cliffs that are the greeting card of these wonderful mountains. Declan Cunningham tells us more.

Hiking in the Comeragh Mountains: The Essential Info

Start: We were welcomed at Powers The Pot Caravan Park and Campsite. Not only were we allowed to park there but Niall, a true gent, even gave us a spin to the start at Kilclooney Forest Park (S340 102) near Coumshingaun.

Distance: The indirect route described is almost 18km but if you went directly across the Comeragh Plateau you would miss the best views but get to finish about 4km sooner.

Shortcut: A circuit of Coumshingaun (6km) is one of Ireland’s great short walks for dramatic scenery that’s hard to beat.

Extension: The walk could also be easily extended by visiting more of the impressive coums or by starting further south and taking in Farbreaga to start (25-35km approx) depending on the exact route.

Difficulty rating: A varied and satisfying walk on a good day but a long and challenging one if the weather turns.

Hiking Poles: 10 Reasons to Use Them

The Comeragh Mountains: What to Expect 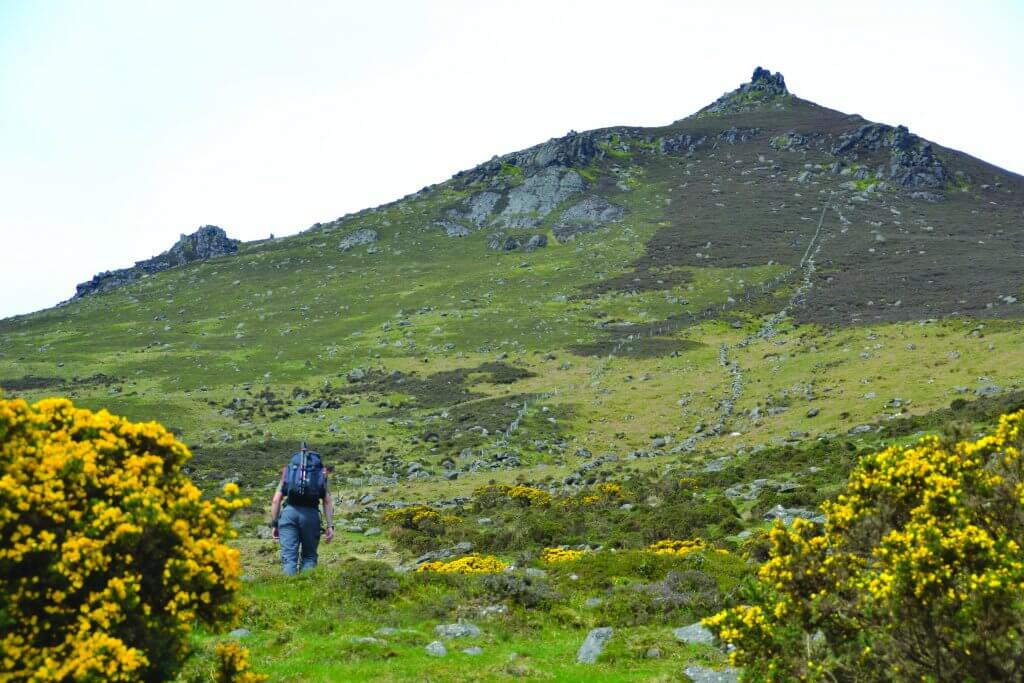 On first glance the Comeraghs can be a little daunting to the would-be walker with steep and dark coums presenting a stiff challenge on multiple sides. For some though, that spectacular scenery is more than enough reason for a visit. On a previous visit I hadn’t had the chance for more than an introduction so I hooked up with fellow guide Milly from exploremore.ie to get to know them a bit better with a south to north traverse of the range.

We found a very helpful and friendly local at the caravan/camping site of ‘Powers The Pot’. The owner Niall and his dog Kevin not only provided a safe place to park but very kindly dropped us to our start point at Kilclooney.

The track leads easily from the car park through the woods and out onto the empty hillside. On the map, the entire range is like some forgotten handful of sand still showing the pinch marks of the icy hand that left us such a dramatic landscape. The name Comeraghs comes from the Irish for ‘abundant in hollows and streams’ and with about 15 coums or corries and countless streams, they deserve their name.

Coumshingaun is arguably one of the best examples of such a geological feature in the Comeraghs, or anywhere else in Ireland for that matter, and it is tough work following the ragged ridge as it climbs relentlessly towards the distant plateau. The good thing about such a climb through such impressive terrain is that there is no end to distraction and views. To the southeast across the fields lies the silver expanse of Dungarvan Harbour and beyond is Helvick Head – a thin finger of land pointing into the hazy Irish Sea. 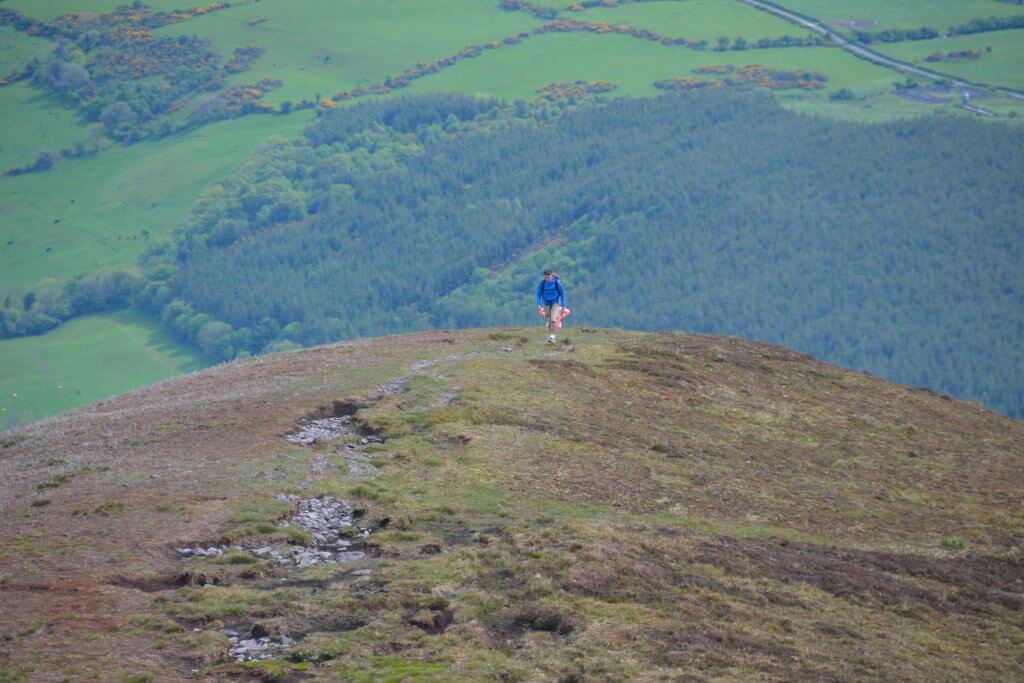 All along the ridge, pointed tors of rock peak out through the thin layer of soil as though the very earth has been stretched too far to cover these lofty tops. The headwall of Coumshingaun is imposing, to say the least. This dark cliff plunges 350m (1150ft) to the eponymously named lake at its heart. The dramatic curve of neighbouring Fauscoum is dwarfed by this gaping maw.

The high mountain plateau above is truly like a world apart and quite a change from the steep approach. Direct traverses of the summit plateau here would require careful navigation in bad weather but we were taking a more circuitous route. Leaving the unremarkable highpoint of Fauscom (792m) in our wake we made our way to Crotty’s Lough.

From Crotty’s Lough and Beyond

From Crotty’s the range feels like castle ramparts with commanding views. The surrounding countryside is like a sea of green fields leaves a tideline at the limit of its reach, where it laps pointlessly at the foot of the dark impenetrable hills.

Coum Iarthar, with its little chain of lakes, was our next stop. From here, the views over Slievenamon to the north and the seemingly endless patchwork of fields into the very heart of Ireland, coupled with some hearty sandwiches, meant we had the ideal lunch spot and a feast for every sense. Such a lonesome perch offers an ideal location for spotting some of the area’s birdlife and we were fortunate enough to have a visit from a beautiful wheatear.

Hiking Socks: 6 of the Best

Our goal lay elsewhere though and with another climb still to do it was no time to tarry. There is one weakness in this great range where it dips to 486m at the obviously named ‘Gap’. In wetter weather this boggy plateau will only yield to passing walkers with a gluey reluctance and we were glad to make easy progress across fairly firm ground. The scattered remains of a fence line will lead you towards the Gap at this point but the descent down Carrignogower is steep and rocky in places so be careful with each step. This is a popular spot for potentially shorter circuits and marked loop walks cross the mountains at this point. 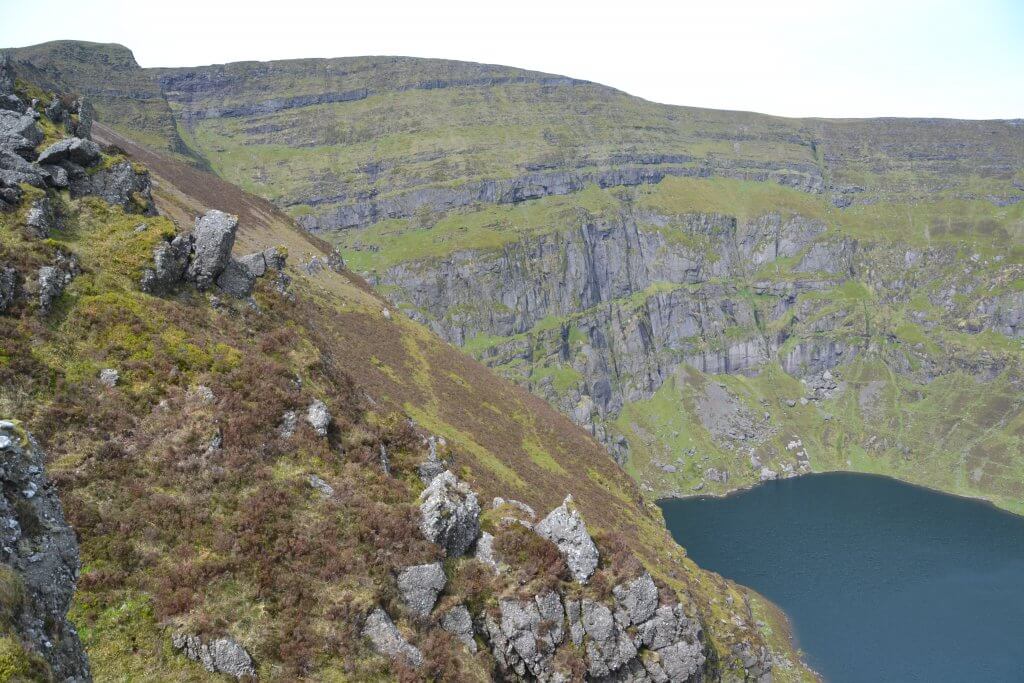 Much like the Monavullagh Mountains to the south of the Comeraghs the Knockanaffrin Ridge is a multiple peaked embankment that is almost like a separate range entirely. Its steep northeastern face makes for more atmospheric views. The more gentle slopes to the west lead the eye into the great open spaces of the Nire Valley and beyond to the distant hills of the Knockmealdowns. Plenty of false summits made for tiring but rewarding work on the last big challenge of the day especially with the wind picking up.

We clambered over the final peaks of Knocksheegowna (678m) and Shauneenabreaga (547m) always clinging to the ridge in an effort to prolong a great day out until our route led us down finally. The Comeraghs literally have mountains of personality and you should get to know them!

The Cliff House Hotel: Where Every Room Has a View

The Cliff House Hotel: Where Every Room Has a View