Outsider’s Declan Cunningham returns to his roots in Tralee, Co Kerry to explore the Slieve Mish mountains on the Dingle Way while celebrating a friend’s 40th birthday. Here he tells us all about it…

Turning 40 apparently means you’re over the hill but whatever way the numbers stack up, whether you’re over the hill or under it, the best way to celebrate any birthday is with your boots on. In this case a friend of mine on reaching that mid-life watershed decided to stretch his legs on a great little section of the Dingle Way in Kerry, from Tralee to Camp. As a nod to the old adage though, our chosen route didn’t go over the hill at all but traversed below the wonderful wall of Slieve Mish near our native Tralee town.

For the uninitiated, the Slieve Mish mountains are a beautifully compact little range that safeguards the southern margins of Tralee Bay and the northern boundary of Castlemaine Harbour. They are to those lovers of the uplands what distracts a Dingle-bound driver’s attention from the road – those dark impressive recesses where eyes often wander but feet seldom follow.

Our intention for the day was to get a closer look without committing ourselves and simply tip along at the mighty feet of these lonely hills. It would be like leaving the shop window to venture inside when you knew you’d no money on you, but with a reasonable forecast, a grand group of willing accomplices and the promise of a pint at the end of the day, sure we couldn’t go wrong.

“Now Ireland doesn’t have an official list of great walks but the 179km of the Dingle Way would have to be a favoured contender.”

Now if you’re the type that does things by the book, dots not just the ‘i’s but the lower case ‘j’s as well, then stop reading this sentence because the true start of the Dingle Way is in the middle of Tralee and we had no intention of including it. It’s not that I wouldn’t recommend the wonderfully rewarding and pleasant stroll out along the canal past the windmill of Blennerville, but let’s face it we were all townies and we’d seen (and enjoyed) it a thousand times before.

In New Zealand, following the nations’ waymarked walks would be referred to as ‘tramping’ and the pick of the crop are listed as ‘Great Walks’. Now Ireland doesn’t have an official list of great walks but the 179km of the Dingle Way would have to be a favoured contender. This mammoth eight- to 10-day undertaking would take the would-be wanderer on a fantastic circuit of the fabled Dingle peninsula. Just imagine the fun you’d have sampling the delights of The Kingdom and the endless scenery to be wowed by along the way, not to mention the kudos from showing off your blister scars.

Hope you had a wonderful weekend exploring! #slievemish #kerry

For this particular jaunt we were happy with just a section of this excellent trail. And considering the ‘advanced years’ of some of the party, we decided to give ourselves a well-earned head-start and our little cohort got together at Tonevane (809 107) which is a little shy of 100m up the hill.

15 of the Best Activities in Ireland for Rainy Days

Our walk would be 14km in total and gain very little in the way of height as it traverses its way along, making this jaunt very accessible to all. Anyone looking for more of a challenge could take on the stiff climbs to the corries along the route. Another tougher and very recommended option would be to follow the ridge along the top but whichever one takes your fancy the one great thing this section has in common is that it ends in Ashes Pub in Camp. 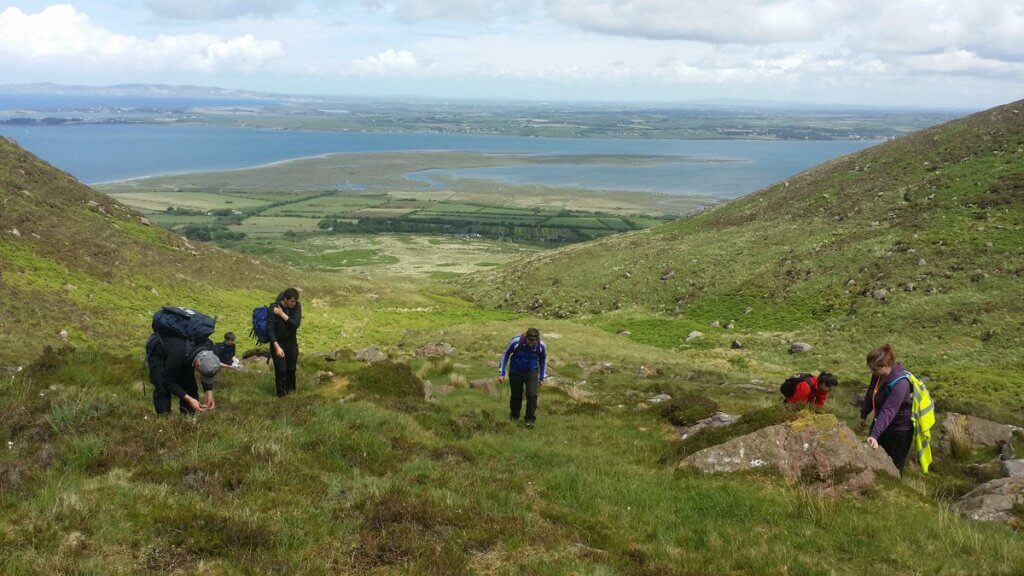 The distant top of Barnangeehy (561m) south of the start is where the ‘Iron Man’ once stood. It was a big metal signal deflector that is little more than crumpled remains now – a victim of time, rust and the wind that gives the spot its well-earned name.

There are several river crossings on our gently undulating route with Curraheen River being one of the larger ones. It flows down from Coumbrack Lake below Baurtregaum (851m), the top with three coums. This is the highest point on the Slieve Mish Mountains and there is plenty of steep ground and impressive ridges up there if the cloud plays ball and is generous with the view.

10 Stunning Irish Islands to Escape to

Steep ascents not withstanding, there are multiple options here depending on just how many of the subsidiary peaks you intend to visit. In Kerry people don’t divulge much and most questions are answered with another. The mountains are much like the people, often shrouded in cloud, so go armed with a compass and the time to get to know them properly.

For the most part our little band make good progress and were quite happy to be out. The weather hardly noticed us and apart from the odd shower it stayed relatively clear. This section of the Dingle Way is also part of the Kerry Camino. We didn’t have Pilgrim Passports to stamp but like night clubbers, respectfully proffered our hands for the little ceremonies at stamping stations. In part due to the celebratory element of our walk this often involved a wee dram. It looked like we might be going ‘high’ after all but sure more Power to us.

Aside from the changing views up the glacial valleys leading to the heights there are several points of interest close to the trail itself. An old Victorian era reservoir that used to provide much of Tralee’s water is worth a look and the trail also passes by the early Christian old oratory at Killelton which was originally built by St Eltan. Ruins are all that is left now of the little community that once existed before they were evicted in the early 19th century.

One point of note for this section is that the waymarked trail draws close to housing and the main road and some of the trail is used for moving cattle so it can be very mucky in places and gaiters are a necessity.

“The 861m summit and the fabled spinning fort of Cu Roi Mac Daire are steeped in legend, with Cu Chulainn himself attacking the fort to rescue his lover, Blathnaid.”

The range comes to an impressive and abrupt halt as the prominent outcrop and summit of Caherconree plunges 700m into the little valley that divides the range. The 861m summit and the fabled spinning fort of Cu Roi Mac Daire are steeped in legend, with Cu Chulainn himself attacking the fort to rescue his lover, Blathnaid. She had signalled the time of attack by pouring milk into the Fionn Glas (white brook). Cu Roi would be one person who might want to cry over that.

The same Finglas River was to be our last little obstacle and we picked our way carefully across the big stepping stones, thankful that the day’s rain was nowhere near enough to flood them. We end our walk in Ashes but we’re far from burnt out and with the legs well and truly stretched it was time for the evening to do the same.