Outsider reader, Martin Walsh shares his story of climbing Mt Rainier, a 4,392m peak just outside Seattle. And let’s just say, it was no walk in the park!

Thirty minutes before landing at Seattle airport the hubbub started. I lifted a corner of my sleep-mask (why does it seem like such a major admission!) to see what was disturbing my snooze. Passengers leant across each other snapping photos out the window. With heightened curiosity, I leant over to see what everyone was looking at and saw a big (very big) snow-covered mountain. My stomach somersaulted. Was I on the wrong plane? Had the plane diverted? The mountain I was flying to (Mt Rainier) was only 4,392M/ 14,411ft and this looked MUCH bigger. Fellow passengers assured me it was Rainier (pronounced Rehneer). For the remainder of the flight, I wondered had I miscalculated?

This beast of a peak was visible directly through the window of the airport – hounding me.

Landing in Seattle, there it was again. This beast of a peak was visible directly through the window of the airport – hounding me.  I messaged my climbing buddy Stephen “have you seen the size of this mountain”. He responded with his customary reply to any concern about any route on any mountain – a smiling emoji and “it’ll be no bother to us”.

Once on wifi, I learned Rainier hadn’t grown in size since I researched it many months ago but rather it’s the most topographically prominent mountain in the US or in layman’s terms it looks bigger because its separated from other peaks and stands independently. Apparently, it has a greater prominence than K2.  Satisfying myself that we were climbing the right mountain we got on the road. 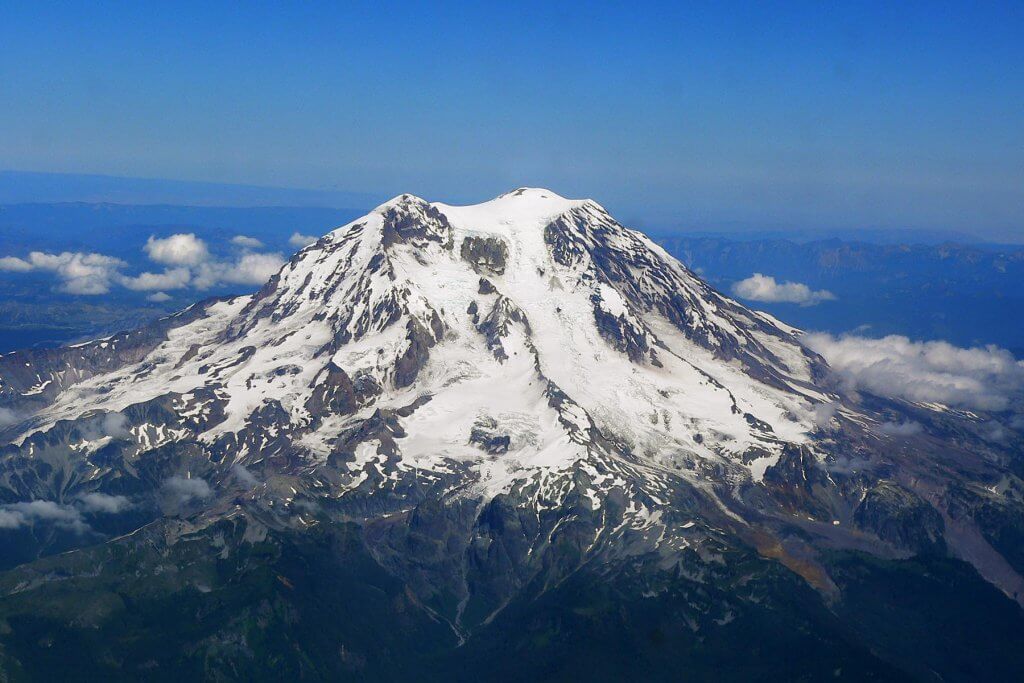 A two-hour drive SSE gets you to Rainier National Park. On the outskirts of the Park is the famous Whitaker store run by that mountaineering dynasty. It provides everything you could possibly want to buy or rent for your climb. Upon arrival we organised our permits with the Ranger. We spent a lovely relaxed night camped in the woods at the bottom of the mountain (5400 ft.).

Sunshine woke us. It was going to be hot. My first piece of advice is to bring a big backpack. I know this because I didn’t. My 35L alpine backpack was at bursting point as I tried to leverage in my own gear and the shared gear (stove, fuel etc) that I hadn’t factored in at all. Rookie mistake. I was reminded yet again why I climb with these guys because after ten solid minutes of slagging me they grabbed the stuff I couldn’t fit and shared it between them. Off we headed wearing our mountain boots and hauling pretty heavy packs. 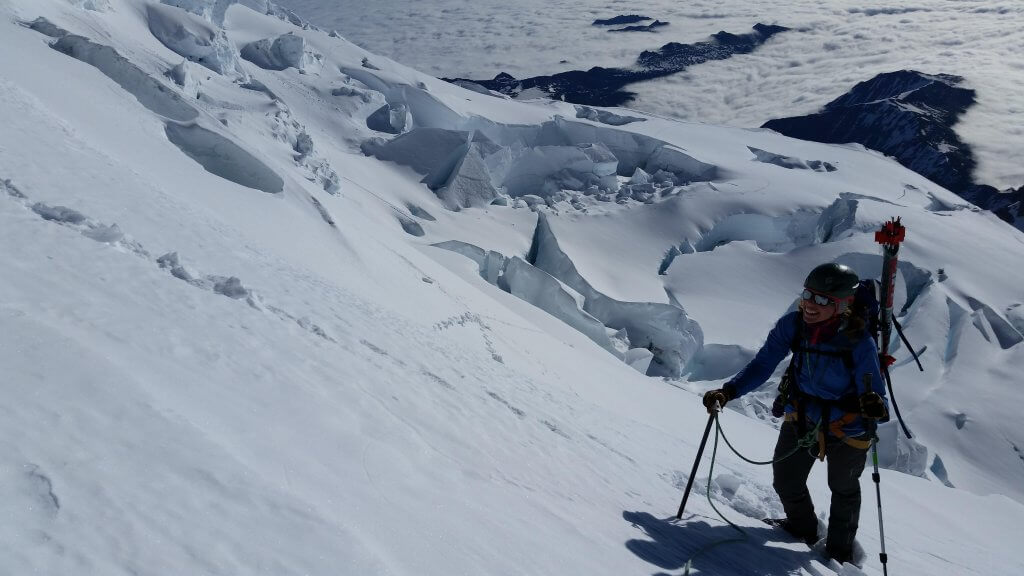 We were climbing the Disappointment Cleaver route (“DC Route”). Our plan was to acclimatise by climbing the mountain in 3 stages. First, climb to 9000 ft and spend a night there. Then head to Camp Muir (10,188) and spend a night in the bunkhouse. Finally, at 11pm leave for the summit once the ice was solid and progress would hopefully be swift.

We sat above the clouds eating chocolate and staring south at the still active Mt Saint Helens with Mt Hood in the distance.

The climb to 9000 feet took 6 hours in high temperatures. From 6000 feet we were on snow as we headed north up the Skyline Trail via Panorama Point and up the enormous Muir Snowfield.  The glare from the snow coupled with big packs required determination. High winds of 70mph were expected that night but luckily we found a lovely sheltered spot. Given the lads had carried some of my gear I insisted on manning the shovel and digging out a flat base in the snow for our tent. What a spot we’d found. We sat above the clouds eating chocolate and staring south at the still active Mt Saint Helens with Mt Hood in the distance. 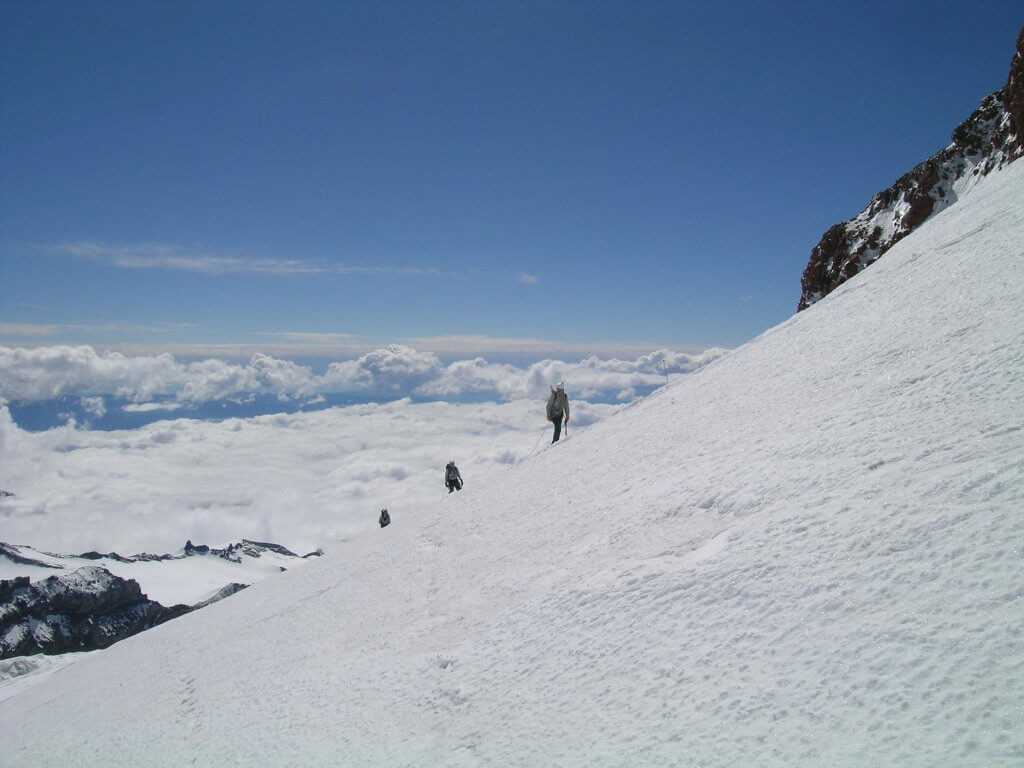 We were reminded of the unforgiving environment we were in as a helicopter landed en route to remove a body from a crevasse.

In the afternoon, we were reminded of the unforgiving environment we were in as a helicopter landed en route to remove a body from a crevasse. At 7pm we were tucked up anticipating the 11pm start to our night climb.

7 of the Toughest Ultra Marathons in the World

The lad in the group with the fancy watch naturally got the job of waking us. He fluffed it. Waking later than expected we rushed a little before realising we had loads of time. We roped up, tied on crampons, turned on headlamps and headed out of camp across the Cowlitz Glacier at midnight.

The thoughts of crossing a crevasse field in the dark was sobering.

The Glacier took about 45 minutes to cross with a few small crevasses to jump over. Then we climbed up Cathedral Rocks, a loose scree scenario, for 20 minutes before we hit the start of the Ingraham Glacier (11,000). As if crossing crevasses at night wasn’t exhilarating enough my headtorch started flickering and going out every ten minutes. Before you say it, I had put new batteries in the night before. Wiggling the lamp kept it motoring but I prayed for dawn. The thoughts of crossing a crevasse field in the dark was sobering.

We crossed the Ingraham flats uneventfully. The dark protected us from seeing the huge seracs (ice cliffs) towering over us or massive crevasses to our side. We kept up a relentless pace guessing it’s unwise to stop in an area known as “Bowling Alley”.

We shortened our rope and hit the bottom of “the Cleaver”. We headed up this steep rocky and icy climb for 1200 feet. My buddy Jerald led us all the way. Albeit that in his former life he had doubtless been a slave driver in ancient Egypt he was a superb guide. We clicked steadily upwards for more than an hour.  Hitting the top of the Cleaver (12,300) we flopped down to devour chocolate. 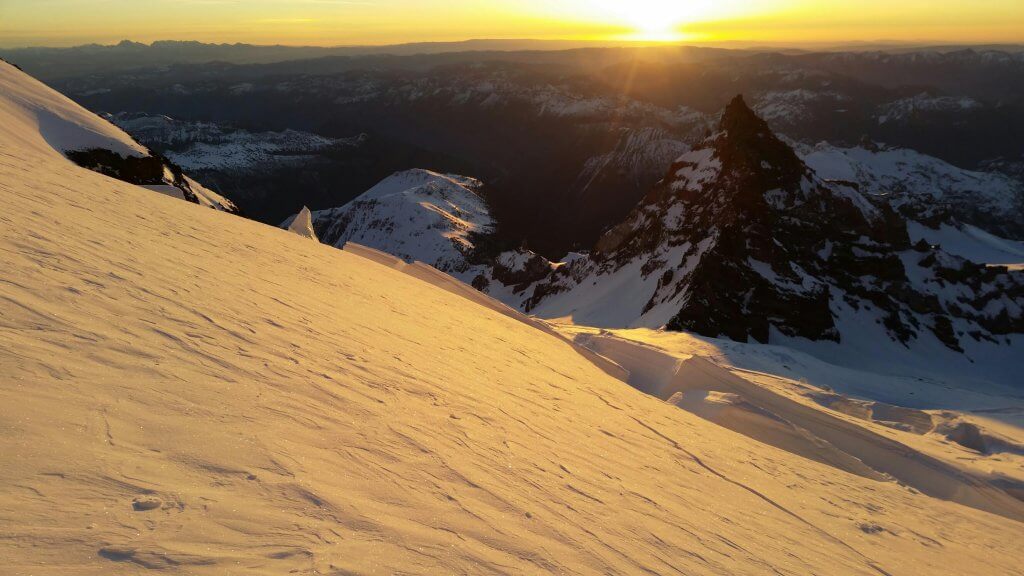 Dawn broke and we smiled as we sat in the snow. Some say once the Cleaver is in the bag the rest is plain sailing. Nonsense, you’re only half way there. We now entered a massive ice field which is the birthplace of Rainier’s glaciers with crevasses and seracs all around. For three hours we belayed each other across crevasses, sprinted away from seracs and motored up steep ice fields. It was a brilliant mountaineering experience. You need guts, stamina and a great sense of fun – as exhibited by Stephen who laughed in mid-air as he leapt each crevasse. Fitness and experience are required if you want to be safe and enjoy the journey.

We reached Guide Rock at the edge of the summit (14,150). Unroping we walked across the crater to the north side to Columbia Crest – the highest point. We luxuriated in cloudless skies and spectacular views. 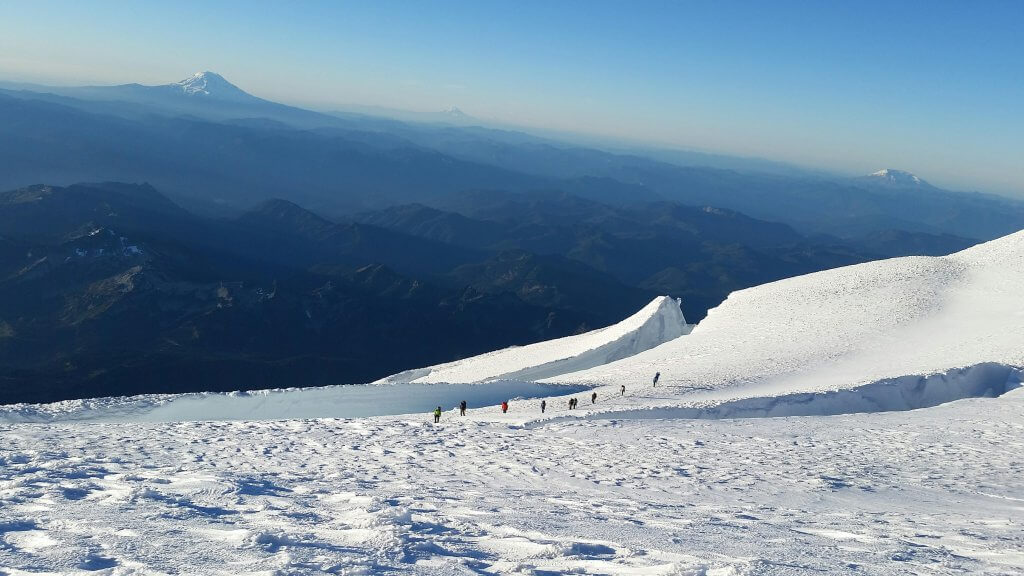 The journey down is no picnic. Going down steep slopes is often as hard as coming up them. I was tired and adrenalin had waned. I kept talking to myself in my head – “keep focused, stay alert”. The snow is slushy in the sun and snow bridges become unreliable. “Concentrate, keep an eye on the lads, make sure crampons are tight”. The route down is incredibly spectacular. Seracs and crevasses previously hidden by the dark are breathtaking and you feel tiny.

We toasted our trip with burgers and beers. We had earned our treats.

We hit Muir after 4 hours. Fellow travellers generated karma for themselves by handing over 3 litres of water they had just melted from snow. One hour later we hoisted backpacks and headed down the Muir snowfield. We nabbed the last room in Paradise Inn at the bottom of the route. Not sure they would have been thrilled at three of us camping in their single room! Undeterred, we toasted our trip with burgers and beers. We had earned our treats.

I’ve climbed lots of mountains big and small but I loved Rainier. It’s in an accessible part of the world and a proper mountaineering challenge with crevasses, roping and ice travel. It’s big and beautiful and provides an enormous sense of enjoyment. Often described as a stepping stone to Denali, I think it is so much more than that.

Thanks for the photos to Jess Matthews and RMI Expeditions especially RMI Guide Brent Okita (www.rmiguides.com)