Al Martin shares his fascinating journey to the summit of Iran’s highest peak, Mount Damāvand, with one of the country’s most established mountaineers.

With its volcano cone shape and snowy summit, Mount Damāvand (5,671m), Iran and the Middle East’s highest peak, has a look of Japan’s Mount Fuji.

Located in the middle of the Alborz range 66km northeast of Tehran, Al Martin travels to climb the mountain only to discover that his guide is Parvaneh Kazemi, Iran’s most famous mountaineer, the first female mountaineer in the world to scale Everest and Lhotse in the same week. Al hears her story as they ascend together.

“Your guide is very famous,” said our tour organiser that first morning in Iran. Still jet-lagged this information didn’t truly register. We were in Polour, a village some 40 miles northeast of Tehran, working our way through a breakfast of bread, honey and omelettes. As Mr Soltani spoke, we nodded, as if utterly familiar with the name Parvaneh Kazemi. She is also known as ‘The Butterfly’ (Parvaneh means butterfly in Persian) he told us. Iran’s most famous female climber and the first female mountaineer in the world to scale Everest and Lhotse in the same week. “Oh yeah,” we absently thought as we ladled honey onto our bread and knocked back cups of black tea.

Later that day we got our first glimpse of Mt Damavand. In the distance it looked magnificent and impossible – a striking cone-shaped peak crowned with snow and ice. At 5,671m (some sources cite 5,610m), it’s the highest peak in the Middle East and the highest volcano in Asia. Reminiscent in some ways of Mt Fuji it stands alone and unparalleled in the Alborz range. From Polour, some 3,500m below, we could make out wispy clouds rising from its volcanic cratered summit. Was this the dreaded sulphur we heard about? As we silently surmised the distant peak, our heads swirled with ambition and doubt, wondering whether we’d ever make it to the top.

The following morning we met the person who would get us there. Parvaneh Kazemi didn’t look impressive but then how should a world-class climber look? Over the following days we would hear her story and how, against many odds (in some cases the actual mountains being the least of them), she achieved so much. If Parvaneh was not shy of telling us about her epic climbs, why should she be? In camp 3, perched at 4,200m on the south side of Damavand, we would see firsthand how famous she was in her home country. Outside the hut, a knot of local climbers breathlessly asked, “Do you know who is here?” To which we nodded nonchalantly, “Yes, she’s cooking our lunch.”

“On the top I had this strange feeling and when I came back to Tehran everything was changed for me. I felt that the real life for me was in the mountains. I told myself that that I belonged there and not in the city.”

Parvaneh, who was born in Tehran in 1970, came late to the mountains. Up to her mid-30s, badminton was her sport and teaching mathematics was her career. “When I first went to the mountains, it was for relaxation and to feel peace,” she says. “I was a professional badminton player for eight years but had come to dislike this unfriendly and competitive world. So I started walking in the mountains to experience nature. For two or three years I hiked the hills. In Tehran we are lucky because we have a nearly 4,000m peak, Mount Tochal, just on the northern edge of Tehran. You can go by taxi and start trekking from there.” 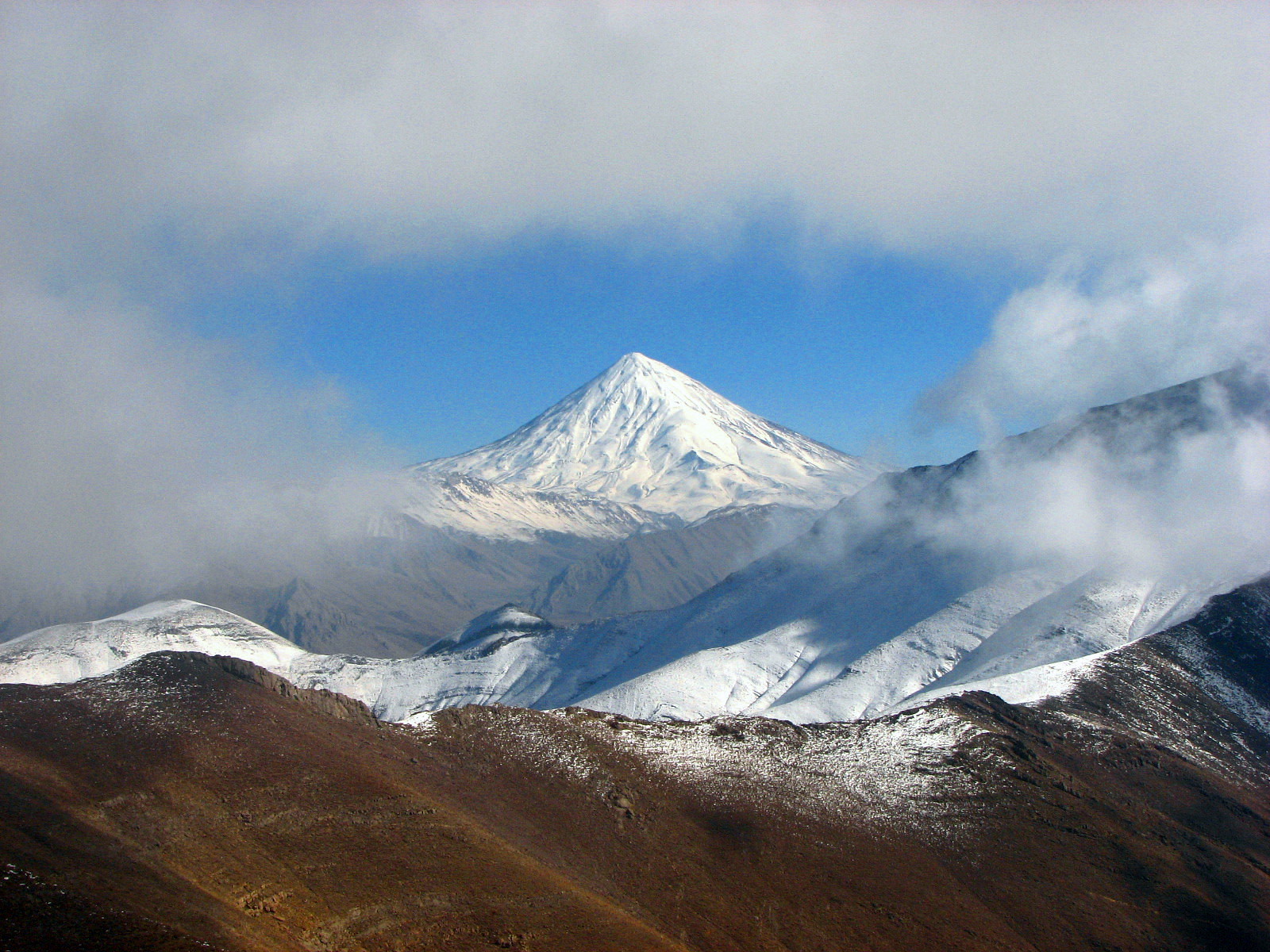 Our ascent of Damavand would be by the southern route: not especially steep but the altitude was always likely to be a challenge. On the second day, we drove from Polour base camp to camp 2 at 3,050m and hiked from there to camp 3 with Parvaneh leading the way. She first climbed the mountain 11 years ago. “I didn’t know anything about mountains then,” she says. “I had no mountain equipment, no knowledge, nothing. So I went with my friends and we climbed in very tough conditions but were successful. On the top, I had this strange feeling and when I came back to Tehran everything was changed for me. I felt that the real life for me was in the mountains. I told myself that I belonged there and not in the city.”

For the past six years Parvaneh has worked as a guide with Damavand Tours. “I was 35 when I started in the mountains, quite old for a sport,” she says. “After two or three years I became a member of a climbing club and after four years I did my first journey to a 7,500m peak, Mustagh Ata in China. I discovered that my body was OK at altitude. Then I became interested in scaling 8,000m peaks and I decided to go to the Himalayas.” Parvaneh has climbed a number of 8000m peaks including Manaslu (8,163m), Makalu (8,463m). “My turtle has been to the top of Everest with me,” she says, showing us the photographs of her stuffed buddy. “His name is Messner.”

“I had planned to just climb Everest. But as Lhotse is close to Everest I decided to climb both at the same time. It meant less cost and less time. After I climbed Everest I had enough energy and I knew I was not finished.”

In 2012 Parvaneh became the first woman in the world to climb Everest and of course Lhotse Everest (8,848m) and Lhotse (8,516m) in the same week. “I had planned to just climb Everest,” she says. “But as Lhotse is close to Everest I decided to climb both at the same time. It meant less cost and less time. After I climbed Everest I had enough energy and I knew I was not finished. Some of my friends had told me that after climbing one 8,000m peak they could not think of another but I was the first to summit Everest in 2012 and when I got back to camp 4 of Everest I went straight to camp 4 of Lhotse to climb in two days.”

We rose at 4.30am on the morning of our ascent of Damavand. Breakfast was by the light of head torches but by the time we departed we didn’t need them. For the first hour or so, in the breaking dawn, we moved steadily upwards to the rhythmic clack of walking sticks and the ragged hack of our breath. Ahead of us The Butterfly seemed to float. We made it to the top of the first ridge, the hut below us never seeming to get any smaller, the frozen waterfall at 5,100m not seeming to get any nearer. “People in Iran call Damavand the King,” Parvaneh would say later. “It is also high enough, cold enough and difficult enough to be a challenge for any trekker.”

By eight o’clock it felt like we were getting somewhere. Camp 3 was small, the frozen waterfall was to our right and every so often Parvaneh would boost us with an altitude reading: “We’re now over 5000m! Wahoo!” Below the pyramid, the false summit, we rested briefly. The snow flurries had abated and a window of sunshine beckoned. Parvaneh recounted tales of Damavand’s significance in Persian legend and recited verses of an epic poem about Arash the Archer who shot a magical arrow from Damavand’s peak to mark a generous border for Iran. Sunshine broke through. We were above the pyramid, just 200m short of the summit. Our goal was within reach. 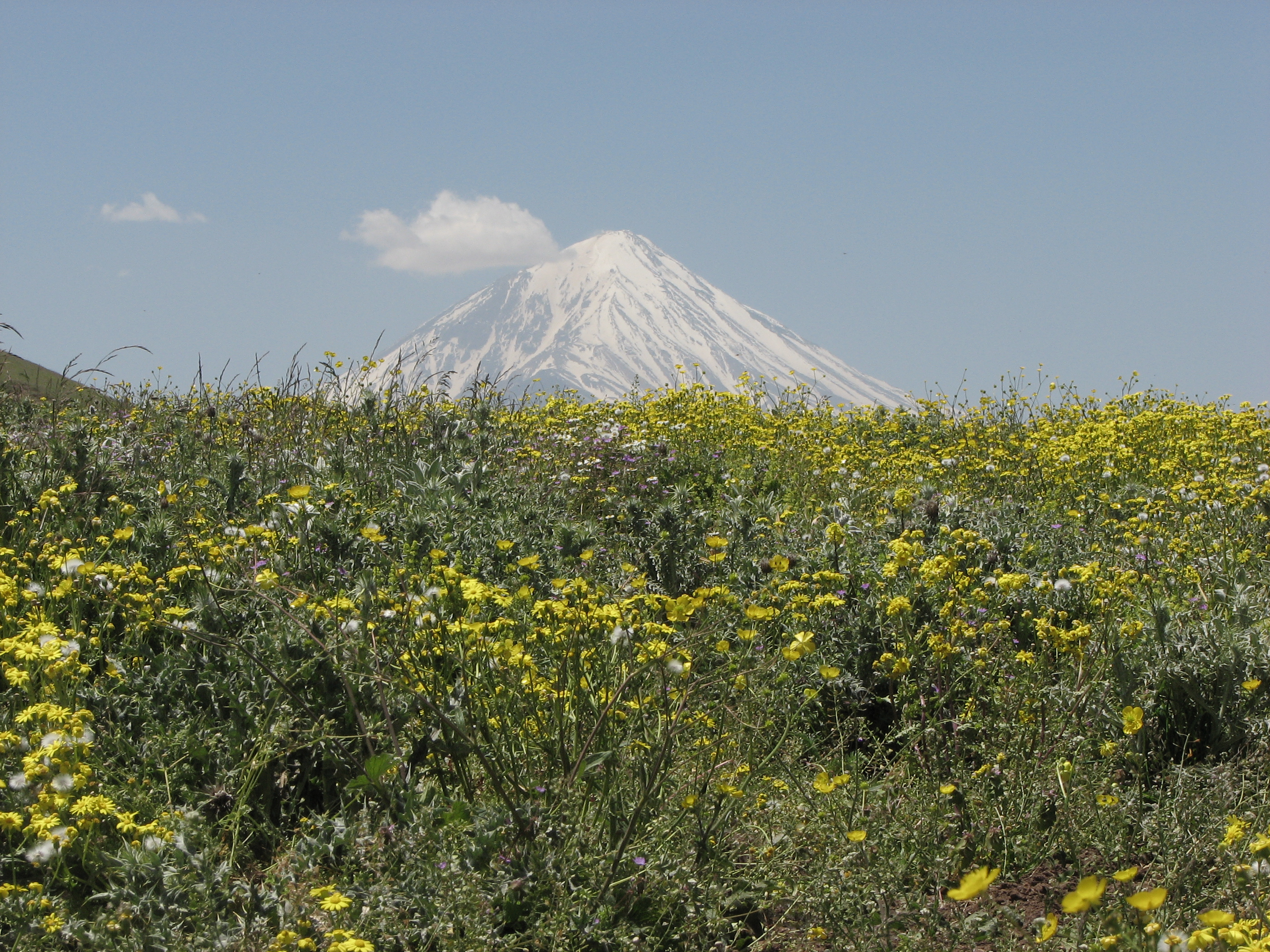 That was July but it already seems a lifetime past. Now, as the nights draw in and winter reaches out, we talk airily about our next big hike, yet remember too that day when we were the only group to summit Damavand. In Tehran, the Butterfly is also preparing. Following Makalu in May, Cho Oyu (8,201m) is in her crosshairs. “I really love the mountains and when I’m there I feel that I’m truly living,” says Parvaneh. “Everything is real in that moment. But I’m always trying to improve myself too. In the mountains I believe that I can do that. For example, I ask myself can I climb completely solo in the mountain. I’m curious about my ability. I want to test myself, to see how strong I really am.”

We climbed Mt Damavand with Damavand Tours a company based in the village of Polour. They can organise a bespoke tour to suit your group and circumstances. You can find out a lot more about Damavand Tours, as well as Mt Damavand and the surrounding region, from their comprehensive website: Mt Damavand Information.

If you’d like to know more about Parvaneh Kazemi and her achievements, visit Peak Butterfly.

Adventure Racing: 5 things to know before your First Race