The 60th birthday is a milestone in many people’s lives. The majority of people will throw a big bash, get drunk and eat a lot of cake. When Belfast’s Shirley Thompson turned 60, she decided that she would do a solo, unsupported independent row across the Atlantic Ocean. If she succeeds, she will be the oldest woman ever to row any ocean solo and also the first Irish woman to row any ocean solo. She sets off this November…

Although Shirley is no stranger to adventure (she’s an ultrarunning ninja, but more on that later!), she is a total novice to the world of rowing. “I started rowing because I decided I wanted to row an ocean. I only learned to swim a month ago. But I wanted to do something really, really incredible for my 60th birthday.

Damian Browne: The Rugby Player Who Rowed Across The Atlantic Ocean

“I considered climbing Everest but the more I thought about it, the more I was turned off by the idea. You are basically paying someone money to drag you to the top, you’re pushing people out of the way because you’re on oxygen. If someone dies at the side of the summit you have to leave them there because it’s your summit and that’s just not how I want to do an adventure.

“There’s also nothing green about climbing Everest. Rowing across an ocean – it doesn’t get much greener than that. It’s human powered, there’s no fuel, there’s no impact on the environment, it’s just me and my wee boat and my oars. So few people have crossed an ocean and then so few women have crossed an ocean. And no women of my age and no women from Ireland have done a solo row so I said, that’s the one for me.” 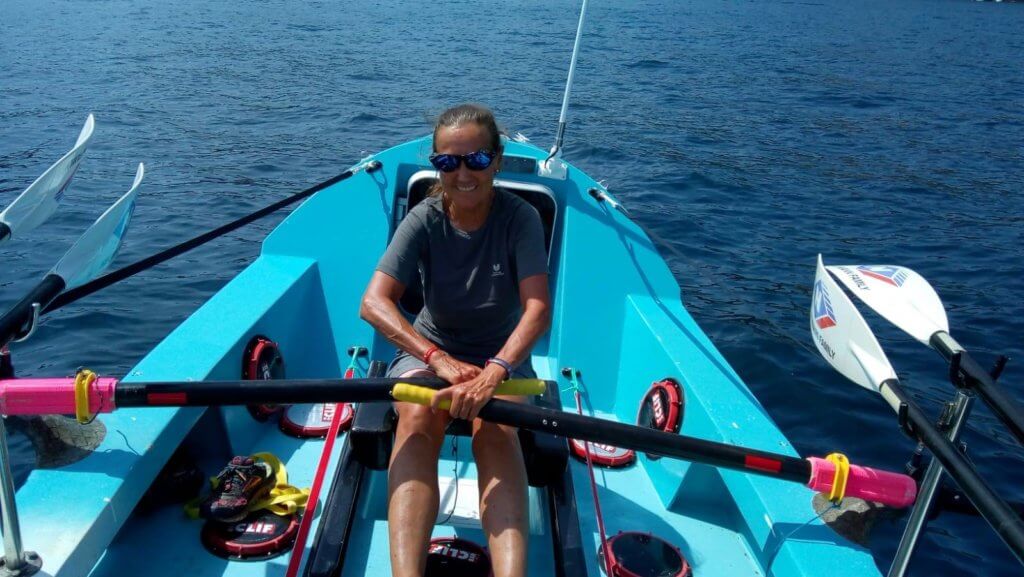 Shirley’s lack of experience is not deterring her one little bit. She believes, like we believe, that in these endurance challenges, the mind controls the body. “In every race I’ve ever done, what has got me to the finish line is my head and not my legs. Over a certain distance, your legs can’t carry you another few kilometres but your mind will push you.

“I think women are actually a lot stronger in that regard than men. I see this in the ultra marathon that I organize in Brazil (The Jungle Marathon). It’s seldom that we have a woman that will drop out of the race, they’d need to be really badly injured to drop out. A lot of men (there are exceptions of course) don’t have the same mental strength as women do. When the going gets tough, they’ll throw in the towel. Whereas women will take their time, they’ll pace themselves, they’ll start off slowly and build up over the week.”

“My feet were like bits of raw meat. In the end, the medical team were giving me morphine shots so I could stand at the beginning of the stage. Yet, I never at any moment considered dropping out.”

Shirley oozes confidence, mental tenacity and pure (brilliant) stubbornness. Her stories from past races will make you smile and as a female, it should empower you. Shirley did the iconic Marathon de Sables (251km footrace through the Sahara Desert) five months after she first took up running. “I was 42 when I signed up to it. I really hadn’t a clue what I was signing up to. I prepared well but I wasn’t a good runner and one thing I hadn’t taken into account was the sand getting into my shoes and the resulting blisters. My feet were like bits of raw meat. They were an absolute mess. In the end, the medical team were giving me morphine shots so I could stand at the beginning of the stage. Yet, I never at any moment considered dropping out. I just thought to hell with this, I’m going to get to this finish line if it kills me and I did.

“There were so many guys; army guys, marines etc., in the same tent as me and they were dropping out like flies. Every day I was last across that finish line but I got there. I have that absolute determination that nothing is going to stop me. It’s the same for this row, nobody is making me do this. I’m going to enjoy all of it, even the horrors when I capsize, when there are sharks and storms. I want to do this. I want to feel empowered by doing this.” 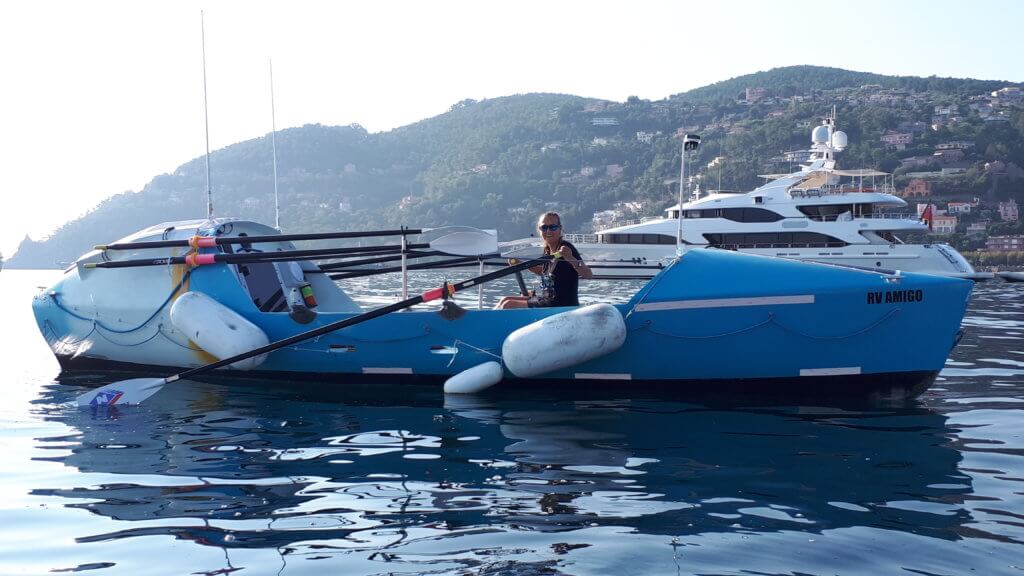 Shirley is doing this her own way, making her own rules. She’s going solo – because she says she would push anyone else overboard. She is not doing it as part of any organized race because she wants to do it independently and at her own speed. Finally, she is doing it out of her own pocket with a bit of corporate sponsorship as opposed to for a charity. “I hate when people say I’m raising money for this charity, will you sponsor me? What they are really doing is raising money for their little adventure and they taking the money for their trip out of the charity money. I hate that. It has cost me over €70,000 at this stage.”

However, she is not foolhardy. She doesn’t underestimate how difficult this undertaking will be and fear is something she is prepared for. “A lot of the things terrify me. Some days when I’m out running, I’ll look up at a house and think, ‘oh my goodness, the waves are going to be bigger than that house’ and I get a bit of a lump in my throat. Or I think about the boat capsizing and the line I’m attached to getting caught and not been able to get back in the boat. Then I think, look I’ll either deal with it or I won’t. There is no point in dwelling on the fear. What’s it going to achieve? The fear is part of the challenge; it’s part of the appeal.” 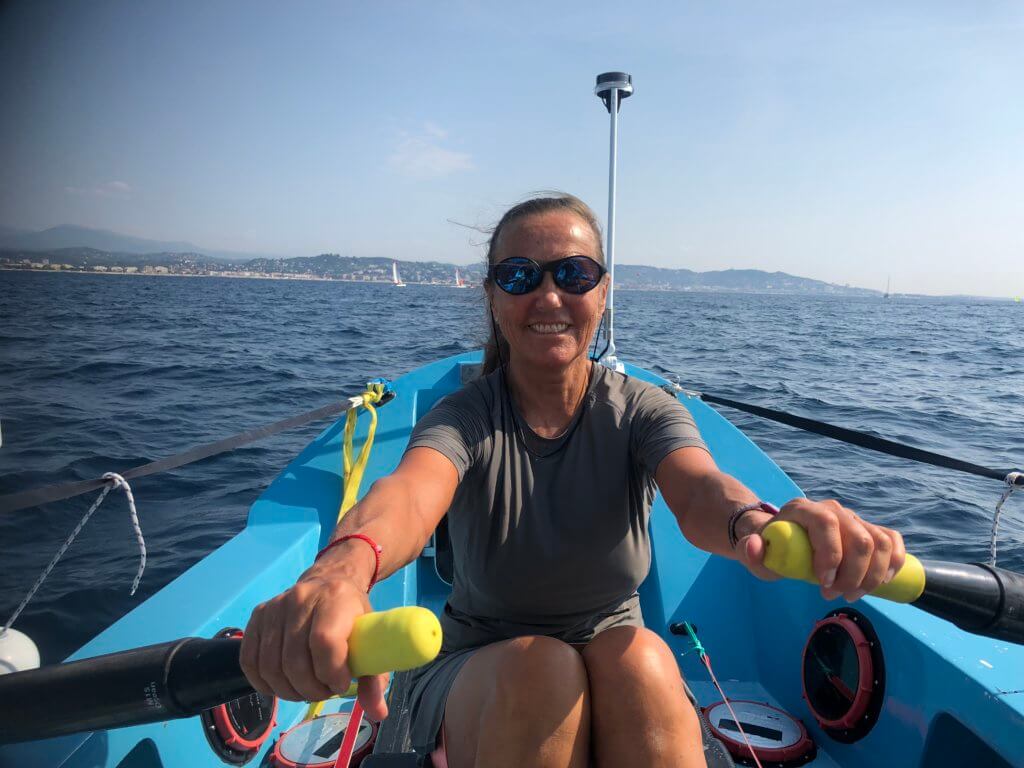 So why at the age of 60, when most of us are starting to wind down into retirement, does Shirley feel the need to go off and row across an ocean? Her reasoning will definitely resonate with many women out there. “As you get older you can feel less validated. I feel the older you get as a woman the less you are considered. When a man gets older, he gets, ‘ isn’t he good-looking with his grey hair?’.  Whereas a woman will go and dye her hair because it’s not considered attractive. There’s a completely different mindset for older men and older women. I don’t feel any different than I did when I was 17 years old, except that maybe I’m more determined. But I think we get considered as kind of past our sell-by date. It is frustrating and it’s neither fair nor true. I think it holds quite a lot of women back. I really hope this will inspire some people to do something when they are a bit older because I think we can do so much more if we just push ourselves.”

If you want to help Shirley achieve her dream, you can donate on her Go Fund Me page.

Have you listened to our podcast yet? You should, it’s awesome!

WATCH: Made In Ireland – The True Story of Irish Surfing – Part 1