“The sky is not my limit, I am,” says Jason Black, one of Ireland’s most accomplished endurance athletes.

In 2017, Jason (46) competed at the Race Across Italy (an 800km cycling event with 10,000m of climbing), Ironman Barcelona 70.3, The Beast, summited Mt Elbrus setting a world record mountaineering speed climb in the process, won and set a new record at the Race Around Ireland Ultra Challenge (he cycled 1,100km in 50hrs and 51mins), and the Race Across Texas (a 1,600km cycling event). Suffice to say, he had quite a busy year. 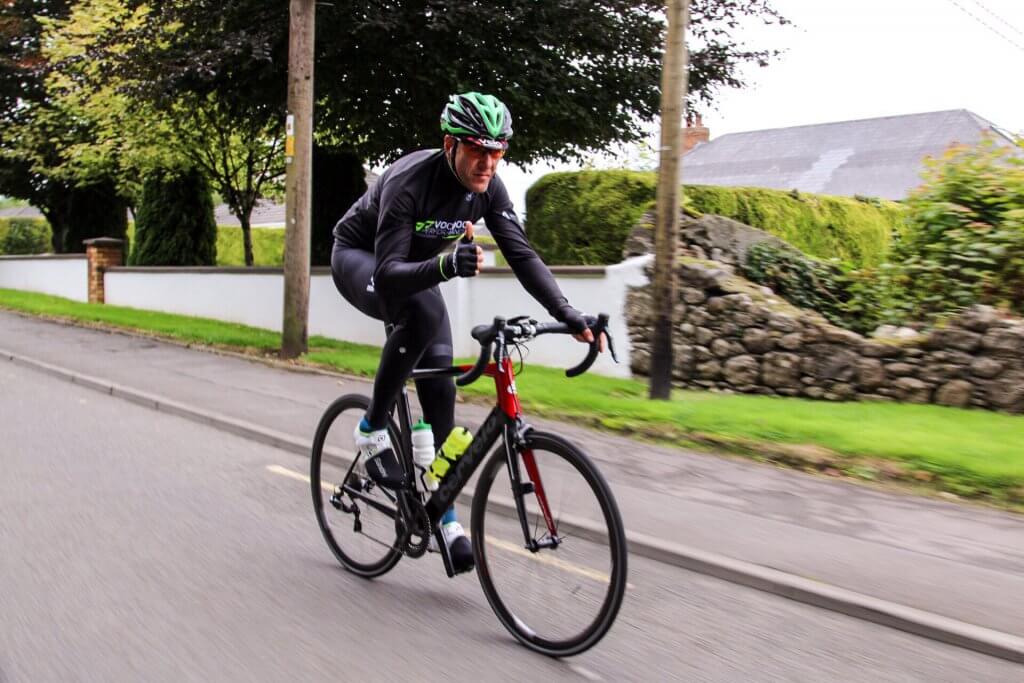 Eager to find out how one manages to compete at such an extreme level we caught up with the man himself, Jason Black, who was more than happy to tell us his secrets to success.

It’s been a big year for you, can you run me through what you got up to in 2017? And what was the highlight?

Yes, it’s been an exciting year, I was focused on making 2017 my year.

In April I did the Race across Italy, a  UMCA World Ultracycling Cup race covering 800km non-stop with 10,000m of elevation. We came 11th in General Classification and qualified for the Race Across America. Then in May, I did Ironman Barcelona 70.3 followed by Mt Elbrus in June. I set a new world mountaineering speed climbing record on Elbrus completing the 5,642m peak in 10hrs to the summit and back. In August I took on The Beast, but unfortunately we DNF’d due to a critical team injury and in September I took on the Race Around Ireland, a 1,200km ultracycling cup race which I won, setting a new course record of 50hrs and 51mins beating the previous record by 9.5 hours. Most recently I headed to the US to take part in the Race Across Texas, a 1,600km ultracycling cup race. However, I was forced to retire from the race due to extreme elements.

You achieved a new record at the Race Around Ireland. How did you prepare for such a big event?

“The biggest learning was the failure to succeed the previous year. I think as athletes we all want to talk about the positive experiences, which is critical. However, my biggest success has come from my biggest setbacks. I’ve spent time coaching myself to have the ability and courage to face my demons and face the “what happened?”, “where did it all go wrong?” questions.

I broke Jason Black down. Physically, mentally and emotionally. I then rebuilt the engine stronger, bigger, better, and faster.

“It was only then that I could really assess where I was and where I wanted to be. Once that was established, the rest was easy. I broke Jason Black down. Physically, mentally and emotionally. I then rebuilt the engine stronger, bigger, better, and faster.

“I spend endless hours every day training the body but for the first time in a structured way, I trained my brain too. I placed strength in self-belief using visualisation of a winning finish line. The difference was incredible.”

Were there ever times when you felt like giving up? How do you overcome those moments?

“Of course!  Endurance events bring that to the table regularly. However, let me explain that fully. The usual emotion of wanting to give up is generally brought on by external elements within the race. While my self-belief is solid, my race can get rocked by complex obstacles usually outside of my control like a crash or mechanical breakdown, weather or unexplainable sickness. But my key brain training recovery to this moment is to control what I can control. You see, I own the emotion. It’s mine and I own it, it doesn’t own me. So once I’ve controlled what I could, I learned to jump the obstacles as they came along. At times I could pre-empt factors and then I just dealt with the unknowns as they raised their heads.

I had a plan and I was prepared to stick to it.

Did you have a plan going into the Race Around Ireland?

“The combination of my previous races helped build up to the event. I knew I could ride really fast and really long. I just needed to unlock the strategy. I had a plan and I was prepared to stick to it. That plan was made up of a race pace which I trained at and a minimum rest period which we trained at. The key was having the ability to stick to the plan regardless of what everyone else was doing or how fast they were going because it was a long race.

How do you fuel these long endurance challenges?

“You need to work out how to fuel your body and mind for a race of that distance making sure you get enough fats, proteins and carbs to power the body forward and keep the brain in a happy high state of mind to continue.

The biggest game changer was recognising what worked for Jason Black. You see we’re all different and what works for one doesn’t the other.

“I avoid gels and manmade sugars. I eat good solid wholefoods which keep my body in a stable state avoiding huge GI issues. The biggest game changer was recognising what worked for Jason Black. You see we’re all different and what works for one doesn’t the other. I’m fat adapted which means I use my fat as fuel.”

Did you have your sights set on breaking the Race Around Ireland record going in to the event?

“Absolutely. We had built our strategy to do so. I told my 13-year-old son Billy before I left the house that the record-breaking game was on!”

How did you get in to endurance events? Were you always sporty?

“I’ve spent my life in an endurance world, long before the word become sexy! I started out at 7 years of age in Judo. I loved the challenge of sport, the challenge of getting stronger fitter and faster. I became the first Irish person to achieve the Dan grade which is awarded after a streak of wins. That was a key driver in my self-belief. It showed me that I can achieve anything I wish if I wish. It became so powerful and once I learned the tools I realised I could apply it to anything in life and sport.”

My strength doesn’t come from the things I can do, it comes from overcoming elements I once thought impossible.

What is it about these big challenges that appeal to you?

“My strength doesn’t come from the things I can do, it comes from overcoming elements I once thought impossible. There’s a difference between arrogance and self-belief, and some people get me mixed up. But I believe in Jason Black. I believe that with the right training physically and mentally and if I’ve prepared well and I’ve done everything possible then I stand a chance.

“The most important part of my day’s training is when I brush my teeth first thing in the morning. Most people look into the bowl but they should try looking into the mirror and see the difference. You have to be proud of who you are, what you are and what you stand for.

Things didn’t all go to plan this year. You had a team injury in The Beast and then you were forced to pull out of the Ride Across Texas. Can you tell me a bit about that?

“I’m super hard on myself. I dip in mood and get really annoyed but in most cases the reason I stop is down to factors outside of my control. We had a serious accident in the Beast which couldn’t have been avoided. And in Texas the temperatures rose to 46°C and we simply couldn’t get on top of the fluid flush of salts and minerals grinding the body so we had to stop after 23 hours. Was it a disaster? No, not at all. We learned that we must learn more and get a better understanding of racing long and super hard in extreme weather environments. You see, failure doesn’t exist. It is simply a setback on the road to winning.”

How do you feel when things don’t go to plan?

I’ve won more from my failures than from my success.