In May 2010, Fearghal O’Nuallain completed the first Irish circumnavigation of the globe by bike with buddy Simon Evans. His unsupported expedition covered over 30,000km, passing through 30 countries and some of the highest, lowest, driest, coldest, warmest and loneliest places on earth. Suffice to say he’s a bit of an expert on cycle touring. Here he shares tips with Outsider readers that he wished somebody told him before he set off.

Few journeys deliver memorable experiences like a big bicycle tour. All it takes is a sensual trigger – a sound, a smell or a texture – and my mind is transported back to being in the saddle somewhere interesting. When walking to work on a winter morning, the chilly wind might mimic the climatic conditions of cresting a 3,000m pass in the Tian Shan mountains in Kyrgyzstan in winter. A floral bouquet brings back the heady perfume of hibiscus smelled cycling out of the desert and into a North African desert oasis at sunset. Exploring the world by bike delivers enduring memories like these by the trailer load. 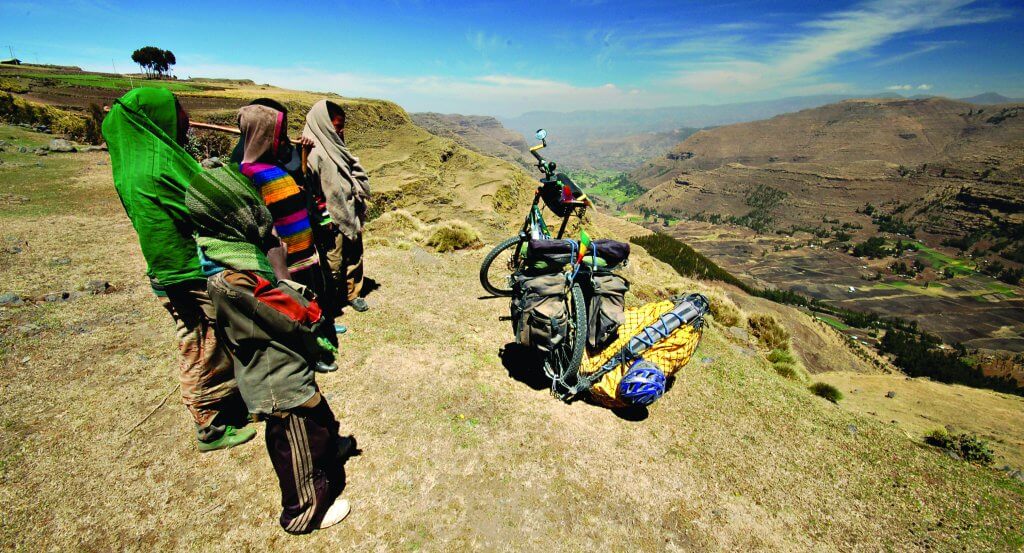 Plain and simple, the bicycle is a special machine. Its passenger is also its engine and joule for joule the human-powered bicycle is one the most efficient moving things in the natural and man-made world. If the engine is well fed and in good condition, it has a comfortable range of 80-100km per day and an average speed of 20kmph. Even packed with camping and cooking gear, a bicycle can carry you to almost any corner of dry land on the planet. Bicycle tracks abound on the highest Himalayan passes and in the remotest African deserts.

It is hard to imagine a more sustainable, efficient and healthier form of travel. And on a bicycle you see, breathe, and live the world at the speed of life, experiencing it as it unfolds at your own pace. A cyclist travels fast enough to see the landscape change but not so fast that it passes in a blur.

You can enjoy a big expedition on an old mountain bike with panniers which you should be able to pick up for less than €500 on eBay or GumTree. Spend a little bit more and your ride will be a lot more comfortable. Surly’s Long Haul Trucker (€1,000) is probably the best entry-level bike designed specifically for touring. It is strong, has a long wheel base, a low bottom bracket, and a laid-back steering angle which keeps it stable when fully loaded.

If you can afford it, Thorn make the crème de la crème of touring bikes. The Raven is top of their range. At €2,700 it may not be cheap but it is designed to happily cover over 100,000km during its life cycle; that’s enough to circumnavigate the globe three times! Unless it gets nicked by a Mongol horseman in the Gobi desert – this has happened – the Raven is probably the last touring bike you’ll ever buy.

Another huge bonus with both the Surly and the Thorn bikes is that they are painted in understated matt colours to make them less attractive to bike thieves. If your bike is bright pink or has flashy detailing, it’s a good idea to camouflage it. Fancy paint jobs can be hidden by wrapping the frame with old inner tubes. This also protects the frame from the inevitable scrapes and scratches of a good tour.

Wheels are probably the most important part of a touring bike. I have ridden over 30,000km on my set of wheels; XT hubs built on wide Mavic DH rims and heavy-duty spokes. Other than changing the bearings at 15,000km in Bishkek, the capital of Kyrgyzstan, these wheels have been untouched and have run straight and true without a single broken spoke. The build is also important for wheels; I got mine hand-built by Mike at the Cycle Inn because standard mountain bike wheels won’t stand up to the strain of a fully loaded tourer. After a couple of thousand kilometres, rims crack and spokes break. Murphy’s law states that this will happen at the point farthest away from a bike shop. 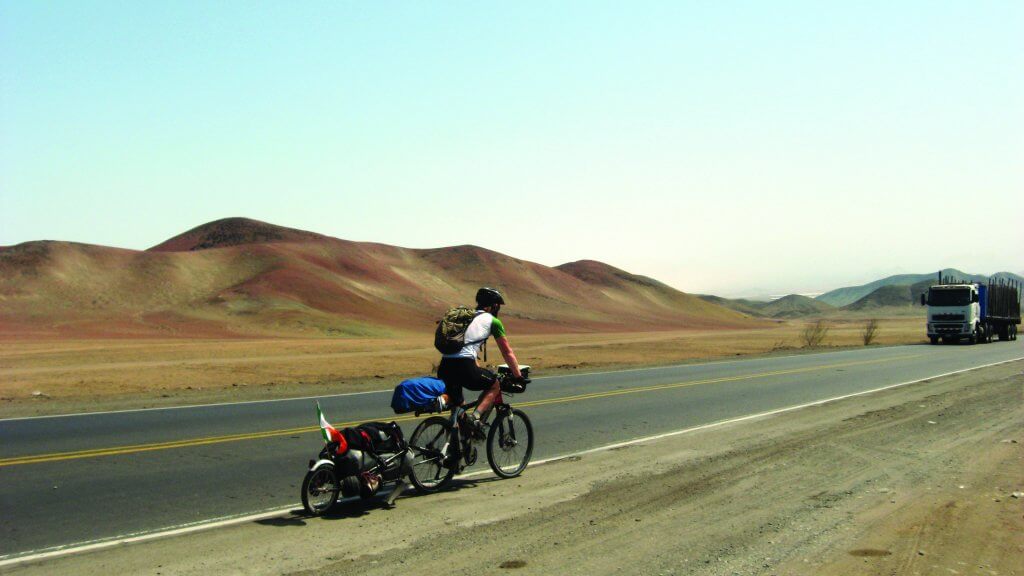 Whether panniers are better than trailers is an ongoing debate among cycle tourers. Both have merits; trailers create less drag and panniers have less rolling resistance. Some tourers like the fact that trailers can be attached simply to the rear axle of any bike and offer a single area for luggage. Others prefer the fact that panniers offer several storage areas so you can keep your food in a separate bag to your smelly socks. The Xtrawheel trailer gets my vote. It is literally a wheel mounted trailer with panniers that rolls behind the bike and combines the benefits of both conventional trailers and panniers.

15 Lifesaving Uses for Duct Tape in the Wild

One of the best bits about cycle touring is wild camping. Out in the wilds you can pitch your tent wherever you like. In the city, it is also possible to camp if you’re discreet. I have an MSR Hubba Hubba tent which is light and very easy to pitch. Then again, if the weather is warm where you are there’s nothing better than sleeping in the open air. Falling asleep in a desert under a diamante-studded black velvet sky is probably one of the most spiritual experiences you’ll have outside of a church. 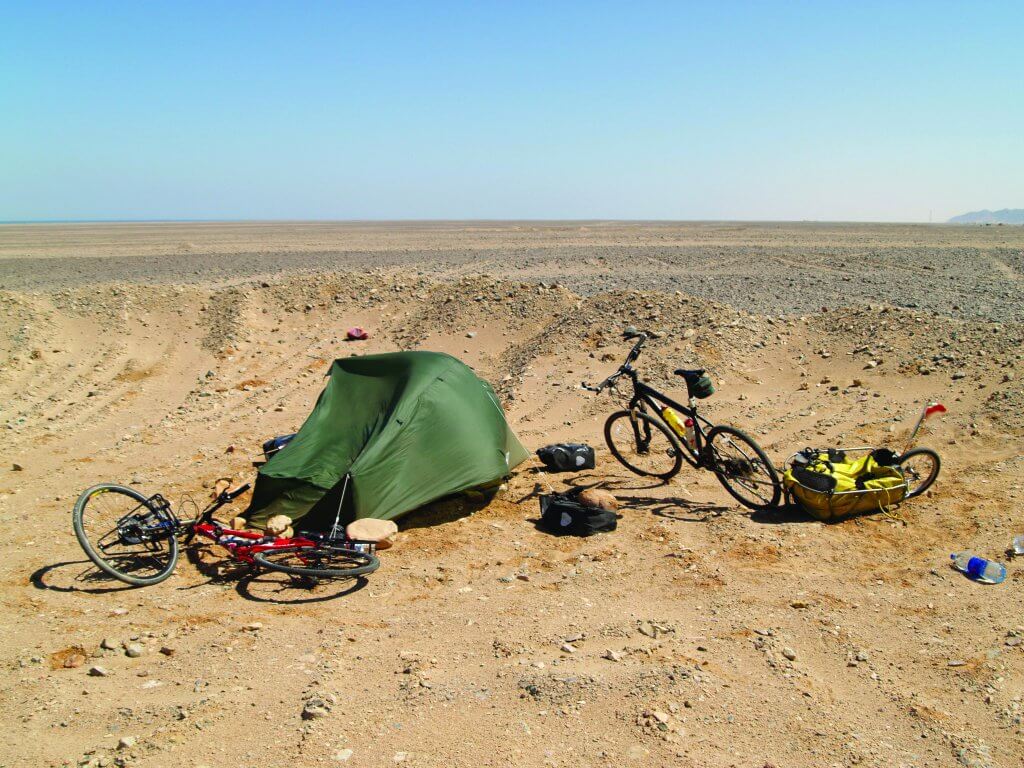 Essential Kit for Cycle Touring and How to Pack:

Packing for a long tour is not rocket science, but there is an art to it. No matter what you pack, you will wish you left half of it at home when you’re dragging the extra weight up hills. But then you’ll regret not packing more when you stop for the night.

Choosing things that have multi purposes is the key to clever packing. Clothes make up most of the bulk so gear that can be worn on the bike and is comfortable off it saves space and weight. Columbia and Patagonia are two companies that make great technical threads that will keep you warm in a blizzard and dry in a storm, but won’t leave you feeling like a space cadet when you arrive in a rural village.

5 Easy Ways to Revitalise your Bike

A Leatherman knife is indispensable. This multi-purpose tool that includes screwdrivers, pliers, Allen key heads and, of course, a knife. Light My Fire makes a clever half spoon half fork thingy called a Spork and great meal kits which combine a chopping board, colander, bowl and a cup into one neat little plastic box.

Bicycle touring offers a sustainable, healthy, low-impact and physically challenging alternative to conventional tourism. Once you have a bike and some camping equipment it doesn’t cost much to see the world. And unlike other adventure activities, if you know how to ride a bike you have the necessary technical skills to go on a big tour. Tours can be as adventurous or as luxurious as you like; sleep beneath the stars or stay in hotels; it’s your choice. You can travel light – carrying just a change of clothes and a credit card – or go fully loaded with all the gear needed for camping and cooking.

Thomas Stevens cycled around the world on a steel penny-farthing with solid rubber tyres in 1884-6 carrying only a revolver, a woollen cycling ‘helmet’ and a spare shirt. It is possible to go touring without fancy gear so you really have no excuse. 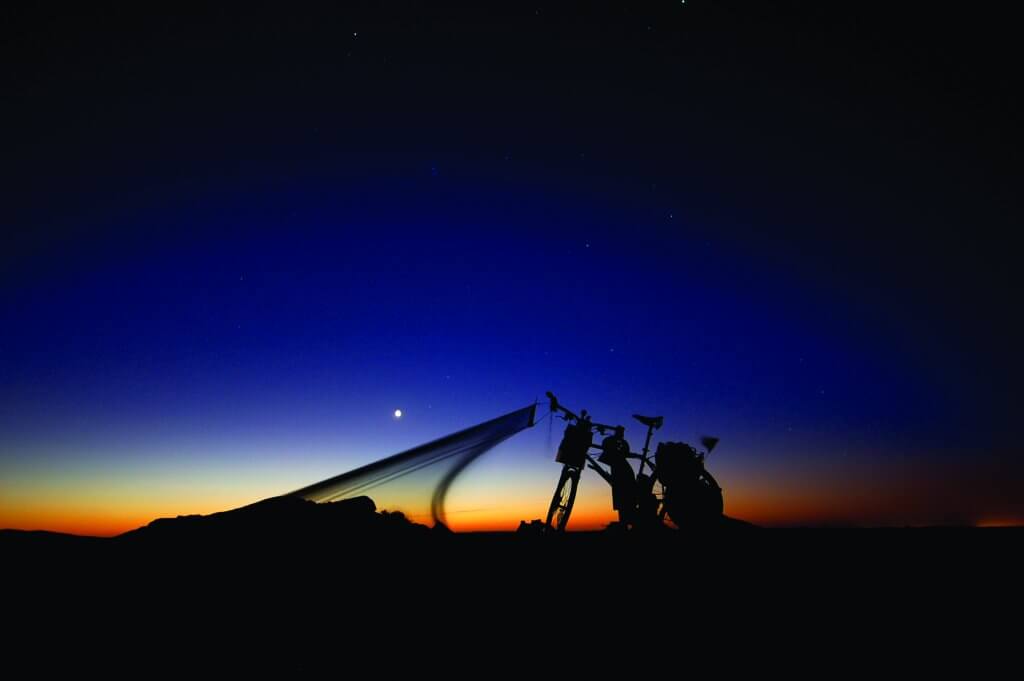