This glorious stretch of the Causeway Coastal route makes for an exhilarating day out.

Sometimes you look out the window and all you see is grey, but in Ireland, even in winter, it is possible for a Cohen-like crack to let the light back in. On a recent trip north to Antrim, Declan Cunningham found such a crack and managed to snatch some unseasonal gold on a glorious walk along a section of the exquisite Causeway Coastal Route.

Take out a map of Ireland’s northern coastline and arbitrarily put your finger on a section. Inevitably, you will touch on some point of historical interest, a worthwhile attraction point or simply a landscape to die for. Of course now there is the added attraction of location spotting from the popular Game of Thrones series but the great outdoors beats a box set any day. 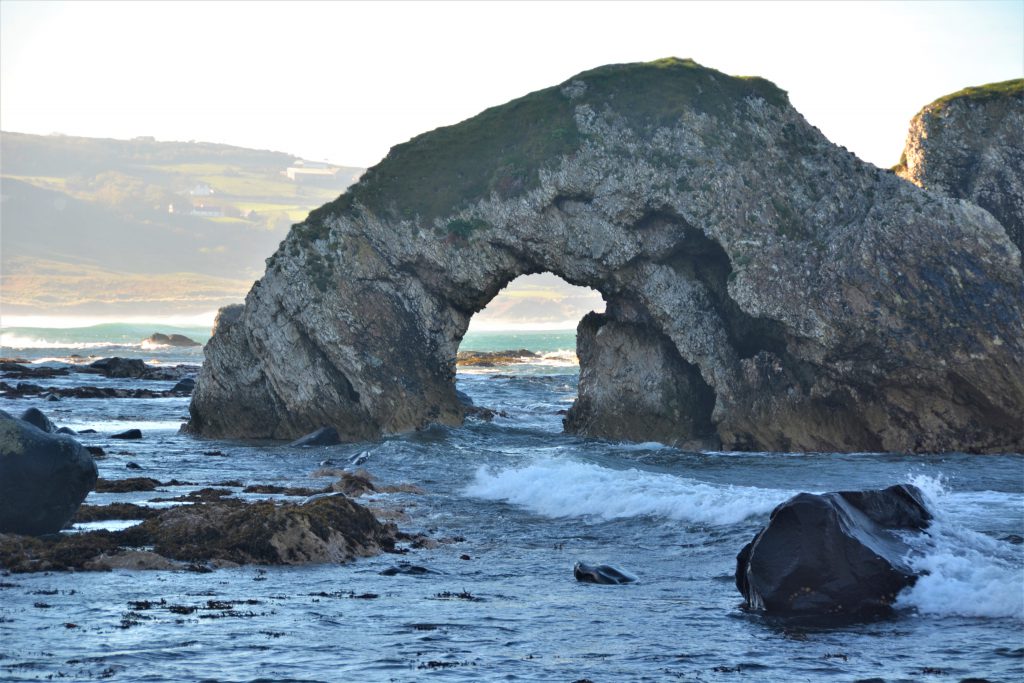 The Mournes are well within reach on a day trip but if you go beyond the wall, so to speak, you’ll probably have to commit to an overnight but sure that just makes a weekend out of it. Nearly everyone has heard of the Giant’s Causeway and while it is easily one of the highlights, and worthy of a trip itself, you should really take a bit more time to savour all the delights of this rich corner of the world.

Having already visited the nearby Carrick-a-Rede rope bridge, we opted to make an early start to our walk in the delightfully secluded harbour at Ballintoy. The little corkscrew road takes you down to the shore but the effect is almost like time travel with the old lime kilns and the little stone buildings nestled in the gorgeous cove. It’s hardly surprising that this location was used for various scenes for the Game of Thrones series.

There is sporadically marking along this walk but if you stick as close to the shivering sea as you can you won’t go too far wrong and, unlike some upland areas, there is no issue with bringing the dog along. Livestock grazes some of the area so while pooches are welcome it’s best to keep them on a lead.

Geologically this section of coastline is a bit of a wonder with igneous basalt lying incongruously beside beds of sedimentary limestone. Several quarries in the area helped produce the sets that paved the streets of Scottish and Irish cities, including Dublin. 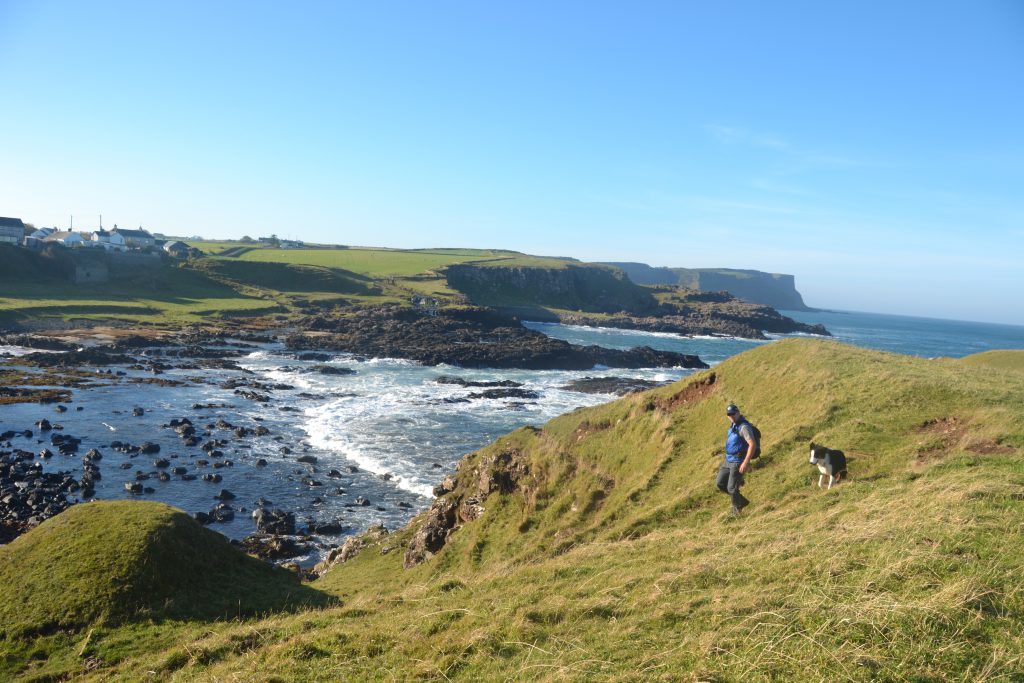 We have hardly left the dark basaltic rocks of Ballintoy behind when we are faced with a little scramble to access the beautiful golden expanse of White Park beach. There is an almost hypnotic element to watching wave after wave roll in along the bay with the distant promontory of Benbane Head as a backdrop.

When the tide is low it would be possible to skip along the rock beds at the far end of the beach but we didn’t mind the short detour up past the old hostel as we got great views of the beach and kept our socks and sandwiches dry too! In fact aside from this tiny diversion, recent repairs along the coastal path mean our entire walk is a saunter by the seaside. Even the smallest separation from the hustle and bustle is a delight but especially so now that we have the sea and its endless rhythmic presence as a constant companion along the way.

As its name suggests, the tiny hamlet of Portbraddan has its origins in salmon fishing but now this little gem of a spot is just the coolest little seaside terrace. Even a miniature attraction like this has a point of interest as it is also home to St Gobban’s, the smallest church in Ireland.

We leave the golden sand behind us and pass through a hole in the cliff to the next wonder. The trail starts to climb its way up through the splintered coastline towards the lonely ruin of Dunseverick Castle. It was once a seat of the King of the Dalriada and was later sacked by Cromwell’s troops. But the only one to lay any claim here now is the sea.

The beachside track turns grassy at this stage and starts to rise. The mighty cliffs of Benbane Head cannot be passed at sea level so we revel in the easy climb and the ever-improving views afforded to us. The winter sun is surprisingly warm and looking back the way we have come we can easily see the curious outpost that is Rathlin Island and the dramatic shape of Fair Head where no doubt climbers are enjoying the same day in a very different way.

The next beautiful feature along the coast is the wonderfully inaccessible Port Moon. This idyllic little cove has been a fisherman’s haunt for centuries, with crab, lobster, cod, plaice and salmon all being fished by various means. The lonely little cottage at the foot of the cliff gives silent testament to the industry of the past but also serves as a bothy for visits from kayakers on the northwest canoe trail.

The simple action of a glance over our shoulder puts an added spring on our step as you can see virtually all of the indented route we have travelled so far. What a novelty it is to have beach walking and a cliff top trail on the same outing and now rather than dip our toes in the sea we step perilously close to the edge for dizzying glimpses of the breaking waves far below.

Close inspection of the ramparts show the early signs of those basaltic columns that the Giant’s Causeway is famous for. We still have ground to cover before we can see them though but not until we have found a suitable perch from which to take in the views….and the grub in our packs. 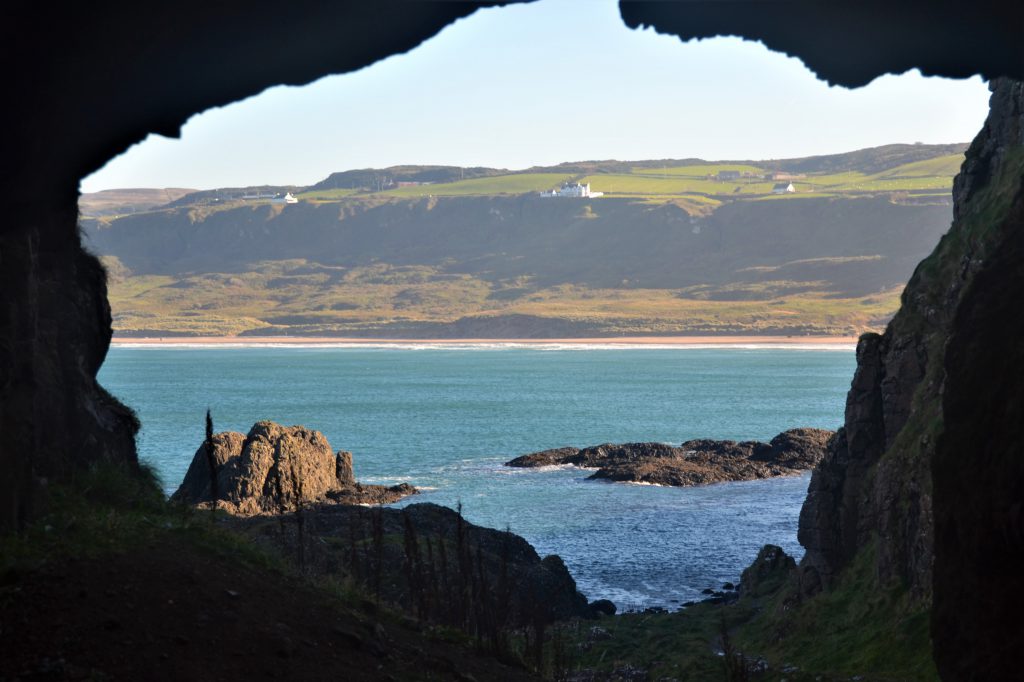 Benbane Head feels like far more than 100m as it pokes bravely into the Northern Atlantic. The sea-stacks and myriad rock islands below are slowly changing proof that the conditions here are not always so fantastic. Back in 1588 the ill-fated Spanish Armada was forced into a detour around this coast. The galleon La Girona was attempting to sail to Scotland when it was wrecked of Lacada Point. Some of the treasure it was carrying was recovered but only a small wooden monument is here to remind us of the 1291 lives that were lost.

From now the coastline has been shaped so spectacularly by geology and erosion that there are named and clearly identifiable features everywhere. Our crow’s nest viewpoint enables us to easily pick out the shape of the Amphitheatre and later the Organ but for a true sense of the magic of the Giant’s Causeway, it is undoubtedly worth the detour down all the steps. A sure-footed curiosity will have you hopping across the octagonal rocks below trying to decide where geology stopped and the myth and legends begin.

Beyond the Causeway is the 19thC Bushmills railway. It only runs in the summer months so it is a novelty to follow the narrow gauge till we get close enough to cut across to Bushfoot Strand. We dip our gaze against the low winter sun and kick happy sandy steps all the way along the beach to our finish at Portballintrae. The Armada may be forgotten but there will always be treasure on the Causeway Coast. 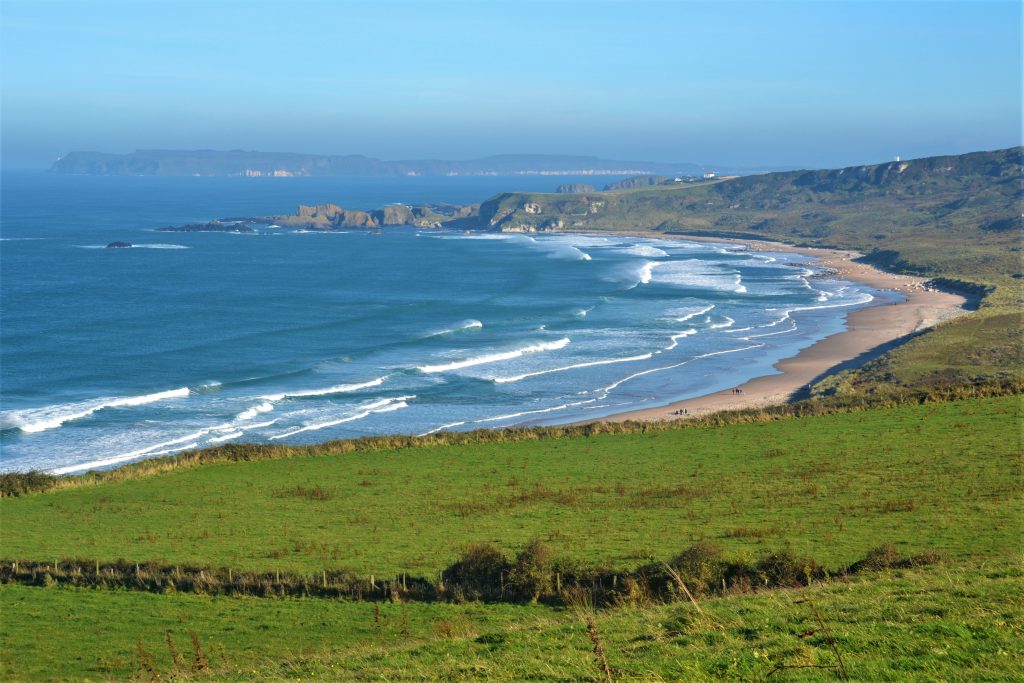 Distance: This was one of the most enjoyable and varied 16km walks we’ve ever done. There is endless opportunity for exploration or extension so pick a section and get busy walking. There is loads of details on www.causewaycoastway.com

Maps: The Causeway Coastal Route mini brochure has a basic map and some information on local points of interest which is perfectly adequate for the walk. The OSi Discovery Series Northern Ireland Sheets 4 and 5 cover this walk but this is one walk where navigation just won’t be necessary.

Difficulty rating: The only difficulty will be limiting yourself to one section, so pick a nice day, pack tasty sandwiches, don comfy boots and you won’t go wrong.

Top tips: We parked in Ballintoy and found it difficult to get a cab back so maybe do the car drop in the morning to avoid delay.

The Inn On The Coast, Portrush: What a great place proved to be for us and our top dog, Murphy. Murphy got a welcome and a treat on arrival and there is a selection of dog-friendly rooms so it was as easy as pie. Murphy enjoyed his first hotel experience and so did we as there are loads of attractions right on the doorstep.

The Bushmills Inn, Bushmills: If you like to mix your pleasures, look no further than the perfectly placed Bushmills Inn. It’s only minutes from the end of the walk and home to the oldest whiskey distillery in Ireland. Even Joyce gave it a mention in Ulysses so it’s not to be missed.

Weekend Breaks: Off the Beaten Track in Co Mayo

Weekend Breaks: Off the Beaten Track in Co Mayo