Get up close and personal with the epic landscape along the Causeway Coast by exploring on foot. From tabletop mountains to forest parks, as well as beach walks and cliff trails, you’re spoilt for choice when it comes to breathtaking walking routes. So hop out of the car, pop on your hiking boots and get exploring.

There is an abundance of glorious hikes and walking trails right the way along the Causeway Coastal Route from Belfast all the way to Derry. Take your pick from short walks steeped in history and geology, soothing beach strolls or more challenging hikes, you’ll be spoilt for choice. And one thing is guaranteed; no matter where you walk, the views will be absolutely phenomenal.

Here we take a look at some of our favourite spots to explore by foot along the Causeway Coastal Route:

The 40-minute drive up to the Glenariff Forest Park is an activity in itself. Surrounded by tabletop mountains dropping down to the pristine ocean below, you would be forgiven for thinking you were in Cape Town for just a minute. But in fact, the landscape here is even more impressive.

Tall waterfalls tumble down the electric green cliffs sides as you near the forest park itself. Once in the park, you can take your pick from three main trails. We highly recommend the Waterfall Trail. Weaving its way down to the valley floor and following the babbling river, the out-and-back route winds its way amidst the trees to a beautiful waterfall. You’ll cover a total distance of 3km. The waterfall looks so good, you’d almost take a dip if the water weren’t so cold! Laragh Lodge at the end of the trail is the perfect spot to refuel (its scones are to die for), before ambling back up to the car park.

This spectacular trail stretches all the way from Portstewart to Ballycastle covering a total distance of 33 miles. The route, which usually takes walkers two or three days to complete, passes through some of the area’s biggest tourist attractions, including the Giant’s Causeway, Carrick-a-Rede Rope Bridge and Dunluce Castle. If 33 miles sounds a little too much, then you can opt to take on smaller chunks of the trail.

One of our favourite sections is between Ballintoy and Portballintrae. Offering sweeping views across the Atlantic, this glorious stretch of the Causeway coastline makes for an exhilarating day out. There is sporadic marking along this walk but if you stick as close to the sea as you can, you won’t go too far wrong. And unlike some upland areas, there is no issue with bringing the dog along. Livestock grazes some of the area, however, so while pooches are welcome, it’s best to keep them on a lead.

Those visiting from April to September can avail of the Rambler Bus Service. Running in both directions from Coleraine to Carrick-a-Rede, it will pick walkers up at nine different points along the Causeway Coast Way, making one-way walking routes a cinch.

And we all know that one of the best things about a good brisk hike is the post-exertion reward! Luckily there is no shortage of incredible eateries dotted along the Causeway Coast. Check out our comprehensive guide to our favourite cafes and restaurants along the route for more info. 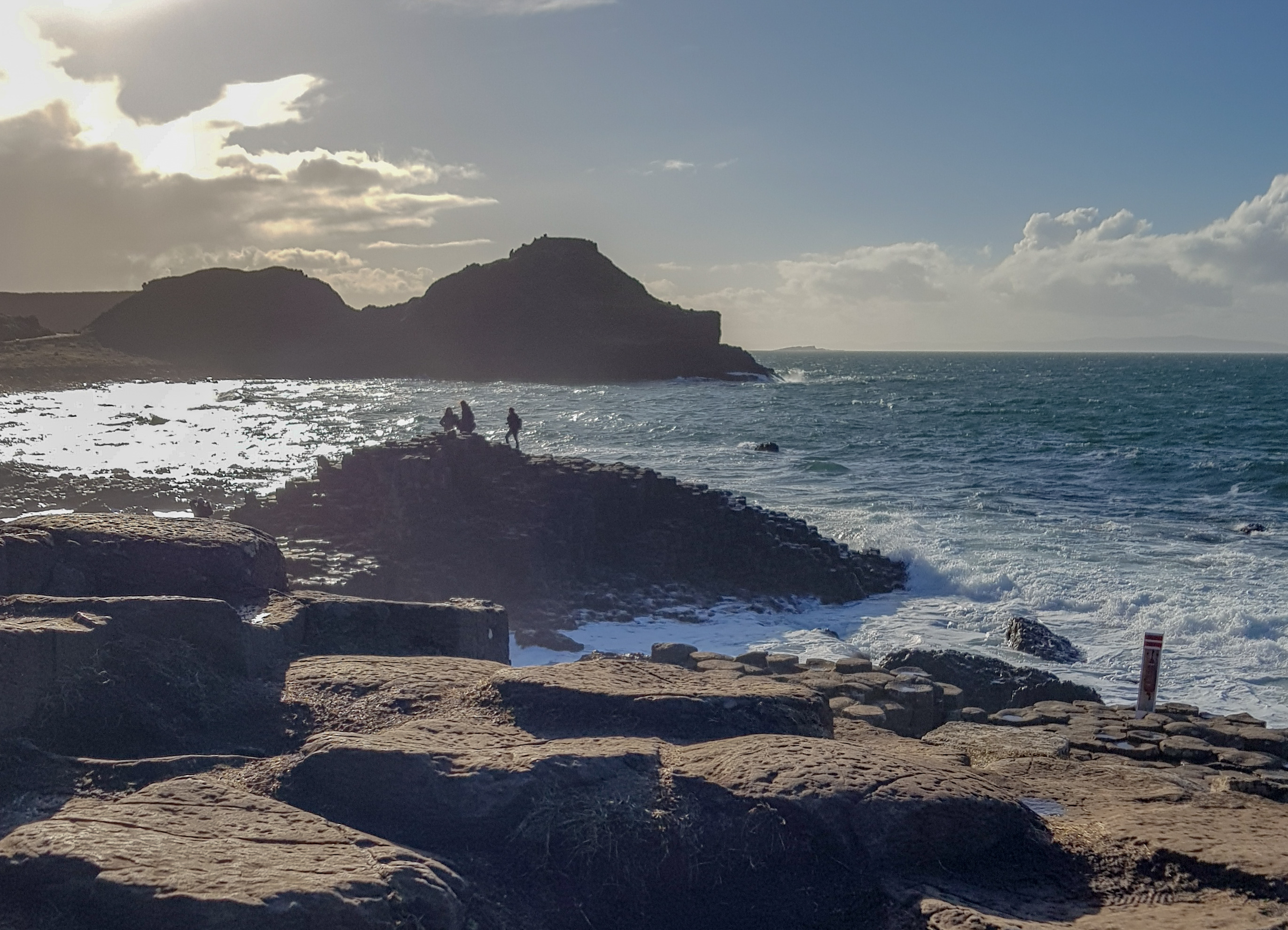 The hexagonal columns that cover the Giant’s Causeway never fail to amaze me. I recently visited this incredible phenomenon for my sixth time and it never gets old. I love standing on the rocky outcrop, staring out to sea thinking about how it was formed.

Some 60 million years ago, Antrim was subject to intense volcanic activity. Highly fluid molten rock was forced up through fissures in the chalk bed to form an extensive lava plateau. The dramatic cliff-like edge of the plateau forms the Causeway coastline. The larger fissures, through which the lava flowed, can be clearly seen as bands of dark rock cut down the cliff faces and jut out to sea. The rapidly cooling lava contracted and variations in the cooling rate resulted in the world-famous column structures. It is phenomenal.

If you are visiting the area, I would highly recommend taking some time to really explore. The walk down to the causeway follows a tarmac road and takes just a couple of minutes. Those looking to extend the adventure should opt to take the even more scenic route back to the car. If you continue on past the main attraction, you will see a steep path weaving its way up the cliffside. A signpost gives you the option of turning left towards the Organ. This path then continues a further 500m to Port Reostan viewpoint. From there we turned back on ourselves to the Shepherd’s Steps which we followed right up to the top of the cliff. A left turn leads to Hamilton’s Seat, which offers an aerial view of the Amphitheatre. It is breathtaking. We then turned back on ourselves once again and followed the cliff top path all the way back to the car park. The full loop takes about an hour in total (depending on how many times you have to stop to go WOW at the amazing views!).

If you are eager to spend more time in this glorious spot then we highly recommend an overnight stay at the Causeway Hotel. Adjacent to the Visitor’s Centre, its rooms offer incredible views and there’s a cosy bar and great restaurant to which you can retire to at the end of an action-packed day.

All entries to the Giant’s Causeway must be booked in advance.

Kinbane Castle has to be one of the most overlooked spots along the Causeway Coastal Route. We got a tip-off from a local so we decided to go and explore. And boy were we glad we did. Venture down the trail for a couple of metres and you will be treated to a view so good that you’ll realise exactly what makes this spot so special.

A winding path will lead you down towards a narrow limestone headland projecting into the sea. The ruin of Kinbane Castle sits right there. To your right, a waterfall spills down the emerald cliff face and into the sea. Straight ahead you can see Rathlin Island and the Dunagregor Iron Age Fort. To your left, a small pebble beach leads to the sea where sea stacks stand tall as the crashing waves attempt to engulf them from below. Those brave enough can follow the narrow path right to the end of the headland where you can sit with your legs hanging over the edge. For just a second you will forget that anybody else in the world exists. It is truly spectacular.

Kinbane Castle is signposted on the road from Ballycastle to Ballintoy. It is approximately 5km from Ballycastle which offers some great places to refuel after your walk. Ursa Minor with its artisan breads and amazing coffee is one of the nicest cafes we have ever been in. Elsewhere, The Central Bar offers heartier fare in front of its blazing stove.

9 Awesome Activities for Adventure Lovers on the Causeway Coastal Route

There are a number of pristine sandy beaches dotted along the Antrim Coast. Our favourites include Whitepark Bay and White Rocks.

Tucked away between two headlands, the green of the land, the blue of the sea, the white crashing waves and the pristine golden sand of Whitepark Bay forms a picture-perfect setting. The beach, which is 1.4 miles long, is backed by ancient dunes and grasslands carpeted with rare plants, including many orchids. The site is also fossil-rich with archaeological evidence everywhere. It is thought that White Park Bay is one of the first places settled by man in Ireland.

If you are in need of some post-walk refreshments, pop your head into Bothy on the main road just above Whitepark Bay. With a roaring fire, an impressive array of baked goods and a hearty lunch menu, it is one of the nicest cafes we have been to.

Another beautiful beach walk is at White Rocks just outside Portrush. Early birds will love this spot at dawn. As the sun rises in the east, the Skerries Islands are slowly lit up as if somebody is adjusting a dimmer switch. We opted to do a little impromptu yoga followed by a bracing walk. The beach joins up with the East Strand which will lead you all the way to the popular seaside resort of Portrush.

There is no shortage of evening entertainment in Portrush. And when it comes to getting a good night’s sleep, we highly recommend Blackrock House, a 5-star guesthouse overlooking the west strand enough. In addition to beautifully decorated rooms, it has one of the best breakfasts I’ve ever had in my life.

Just a two-hour jaunt up the road from Dublin, Belfast is really easy to get to thanks to the brilliant M1 motorway. Or alternatively, you can catch the train which takes just over two hours from Connolly Station in Dublin.

Subscribe to the newsletter
For the latest adventure news, events and gear, sign up to our free newsletter.
Tags: Discover NI - Causeway Coastal Route

9 of the Best Camping Spots Along the Mourne Coastal Route

11 of the Best Places to Stay Along the Antrim Coast

11 of the Best Places to Stay Along the Antrim Coast