Did you know that Wexford has more roads per square mile than any other county in Ireland? This network of routes dates back to the county’s Norman roots and beyond. And just why are we telling you this? Because it means that this county offers a treasure trove of quiet country roads that make for great cycling. And because Wexford has just launched a section of the EuroVelo – a cycling route for anyone who likes to travel on two wheels without the stress of heavy traffic. The route runs in parallel with the historic Norman Trail, adding some lovely points of interest along the way. It’s is just one of many trails for hiking and cycling that Wexford has recently developed. Outsider’s Roisin Finlay headed southeast to find out more.

It’s melt-in-your-mouth stuff. This muffin – with fresh strawberries tumbling out of it. I shouldn’t really but sure haven’t I earned it with the morning’s cycle? And besides, wouldn’t it be rude not to when there are four delicious cakes sitting in front of you? There’s even a lush gluten-free one so no one is left out of the party.

I’m in Carrig-on-Bannow in Co Wexford. It’s a blink-and-you’d-miss-it kind of town, but with a bit of an appetite worked up from a few hours of cycling, the Red Door Coffee Shop catches our eye. It’s a cosy little family-run treasure serving up homemade and local deliciousness. The chef Michael O’Connor pops out to say hello and quiz us up about where we’re cycling to. When we compliment the cakes, Michael tells that they now open on Friday nights for dinner too, dishing out great local produce, including fish straight from the sea from nearby Kilmore Quay. And that next time we’re down, we should pop into Colfers pub next door after as it has great music sessions and serves up good pizza too.

“That’s one of the things I love about cycling. It draws you off the well-worn track, gets you chatting to local people and helps you find those hidden gems that you might otherwise miss”

That’s one of the things I love about cycling. It draws you off the well-worn track, gets you chatting to local people and helps you find those hidden gems that you might otherwise miss. And you have the added feel-good bonus of seeing your holiday money filtering out into small local businesses and communities. 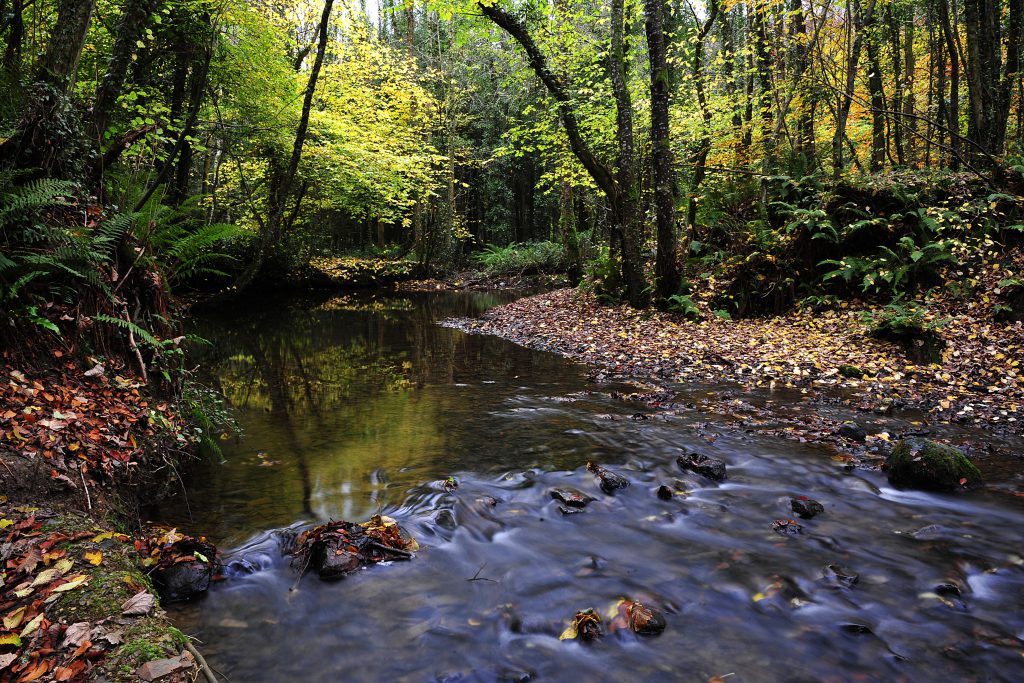 I’m down in Wexford exploring the recently unveiled section of the Irish EuroVelo1 cycling route. Hugging the coastline as closely as possible, the well-signed route runs 120km from Rosslare harbour to Ballyhack Ferry, taking in lovely spots like Duncannon, Fethard and Hook Lighthouse – the oldest operational lighthouse in the world.

5 Easy Ways to Revitalise your Bike

My travel companions are Frank Burke, Cycling Officer with Wexford County Council, who was instrumental in developing the route, and Emmet Stafford, an archaeologist who hails from Galway but who now calls Wexford home.

Frank fills me in on the concept behind EuroVelo (a network of cycling tracks that crisscross Europe) routes. “They follow quiet roads and routes with as little traffic as possible, and they take you to lesser-visited towns and areas as you travel. We even have a free repair station for bikes at Wellington Bridge with bike tools and a pump,” he explains. “Ultimately the plan is for the route to cross over the Suir River at Ballyhack and connect with the Waterford Greenway,” he adds.

“The full EuroVelo1 route runs a whopping 9,100km from Nordkap in Norway right down to Sagres in Portugal – a great challenge for anyone looking to travel under their own steam half way across Europe!”

Incidentally, the full EuroVelo1 route runs a whopping 9,100km from Nordkap in Norway right down to Sagres in Portugal – a great challenge for anyone looking to travel under their own steam half way across Europe! For today though, I’m happy enough to explore the approximately 50km stretch between Kilmore Quay and Saltmills. It will bring us through Duncormick, Carrick, Wellingtonbridge and Saltmills – with a lot of cake stops along the way. 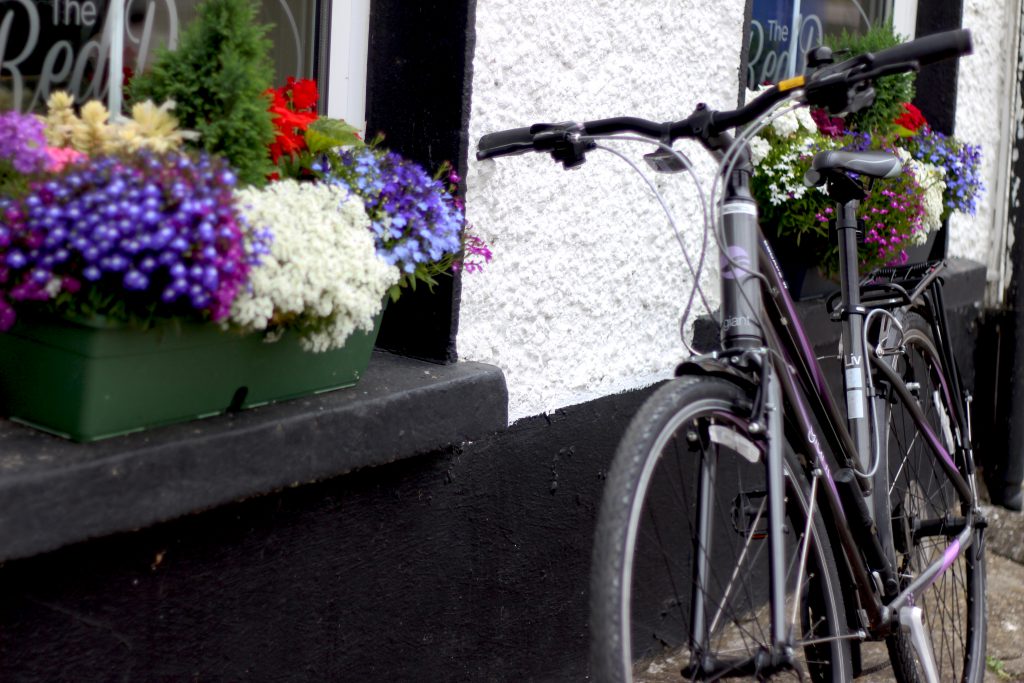 Emmet has come along for the jaunt because the Wexford section of the EuroVelo runs in parallel with the Norman Way Trail so there are loads of historic sites along the way that give you great excuses to stop for a breather, or a picnic or a photo moment.

Emmet has an encyclopedic knowledge of the local history and indeed Ireland’s, and as we spin along roads lined with lush hedgerows and neat barley, potato and grass fields with swallows swooping overhead, he regales us with tales of the Normans arriving in Ireland more than 800 years ago. He tells us about Yola, a unique form of English that was spoken here till the 1880s and some of the words and expressions that are still used locally that hail from it. Like “It’s quare (meaning very) cold out there.” 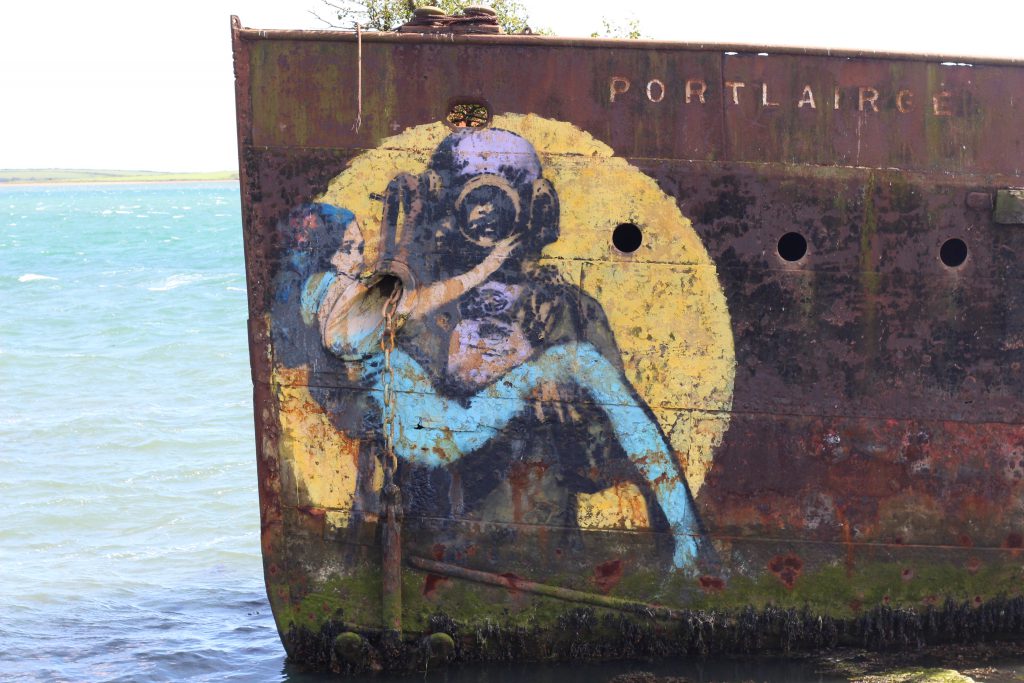 We drop by the under-restoration Coolhull Castle, a fine looking building which was apparently only a grand 16th Century farmhouse of the Devereux family. Still it’s not your average farmhouse that has a meurtrière – or murder hole – a hole in the ceiling of the gateway where you could fire rocks and arrows or pour scalding water or tar down on attackers.

“I stand ogling the magnificent ruins of Old Bannow Church which overlooks gorgeous Bannow Bay and wander amongst the ancient gravestones.”

We visit the very first place that the Normans landed in Ireland. They were invited in by Diarmuid McMurrough, the ousted ruler Leinster in 1169 to help him wrestle back his throne from his enemies. They liked Wexford so much so never left! And who could blame them I think as I stand ogling the magnificent ruins of Old Bannow Church which overlooks gorgeous Bannow Bay and wander amongst the ancient gravestones. I even have a lie down in open stone coffin. According to Emmet, local folklore tells that a spell in the grave will cure any back ailments.

Weekend Adventures for Under €50 in the Sunny South East

I’ve no idea if my at-times niggly back is now perfect but I know my appetite is certainly feeling healthy as we hit the road for Tintern Abbey, a stunning 13th Century Cistercian abbey and an overlooked hidden gem. It has another fantastic coffee shop serving up yummy soup, sambos and cake. You can also take a tour of the Abbey or just stroll around the stunning grounds which have gorgeous walks along woodland trails. And don’t miss the Colclough walled garden which was restored by local volunteers. For a small donation, you can even take home the seasonal vegetables grown here along with a profusion of flowers. 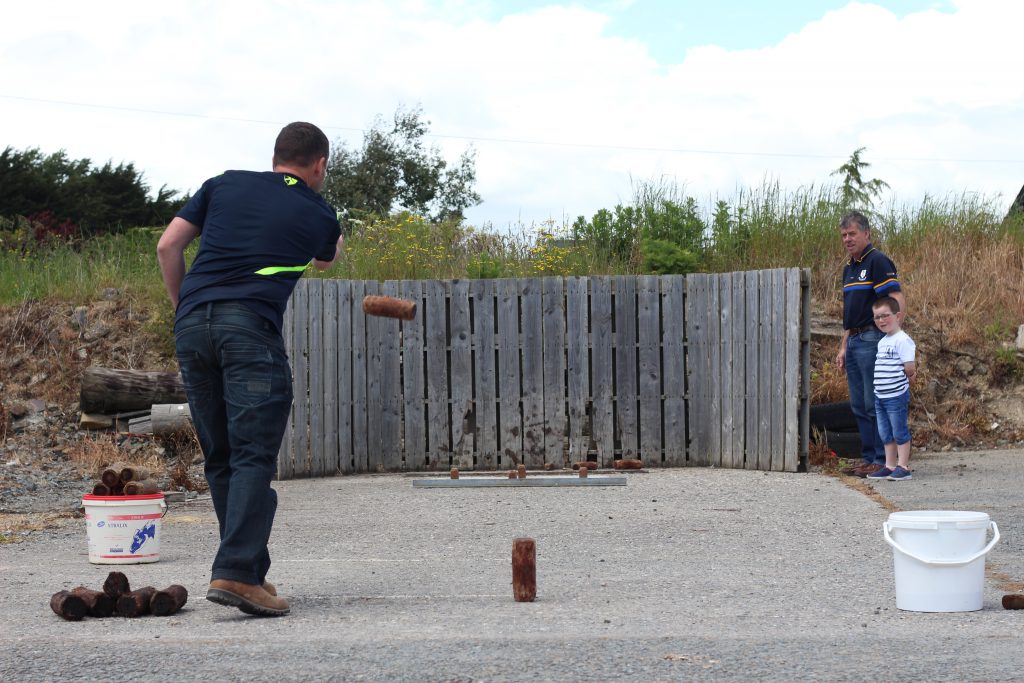 We stock up on some French beans and cabbage before spinning the mile or so along the tree-lined trail down to our final stop at The Vine Cottage pub in Saltmills. The pub has a lovely but as it’s starting to rain we head in for a perfect pint. If the weather’s fine when you get there, the mezzanine has great views of the bay out in front or head out to the lovely beer garden with kids’ play area. And if you’re a bit of a kid yourself you can have a go at the local game of skittles which to a blow-in like me looks like a ‘log throwing’ competition – and a lot of fun!

Sadly the weather thwarts our efforts to have a go so I’ll just have to come back. I’ve tonnes of other local tips I want to follow up on too thanks to Frank and Emmet. Like which side-road to spin down for a glorious dip on hidden beaches like Blackhall Strand, how to take a boat trip out to the Saltee Islands off Kilmore Quay which is a bird sanctuary and offers fantastic diving too. (If you’re really up for a challenge, you could take part in the annual 4km open sea swim from the islands back to shore). And where to buy the best chips – The Saltee Chipper again in Kilmore Quay – but be prepared to queue!

There’s only one solution – put some panniers on my bike, spend a long weekend or a week down here and do the whole EuroVelo.

For more information on the Norman Trail and a downloadable map of it and EuroVelo 1, visit the Euro Velo website.

For a downloadable map of the route, visit the Wexford County Council website.

Places to stay and eat along the EuroVelo:

Interview: Grég Vollet on Anti-Doping and the Future of Trail Running

Interview: Grég Vollet on Anti-Doping and the Future of Trail Running