“Rescuing a mother and her kids from a boat that had run aground is one of the most rewarding callouts I’ve been on so far,” says Jennie Harris, an RNLI crew member and keelboat racer.”

How many people do you know who would be willing to leave their cosy beds at a moment’s notice to help a stranger that is in danger? Now add the possibility that helping that person might put your own life in danger and will undoubtedly involve long hours out on the chilly waters of the Irish Sea. Most of us are probably thinking, eh not for me, but not Jennie Harris. At just 24 years of age, she is one of the youngest active crew members of the Royal National Lifeboat Institution (RNLI) – Ireland’s voluntary lifeboat search and rescue organisation. We recently met Jennie at the Sia Partners Irish Sailing Women at the Helm event and had a chat about her RNLI work, her competitive sailing, and how she manages to find the energy to juggle all that with her university studies and social life. 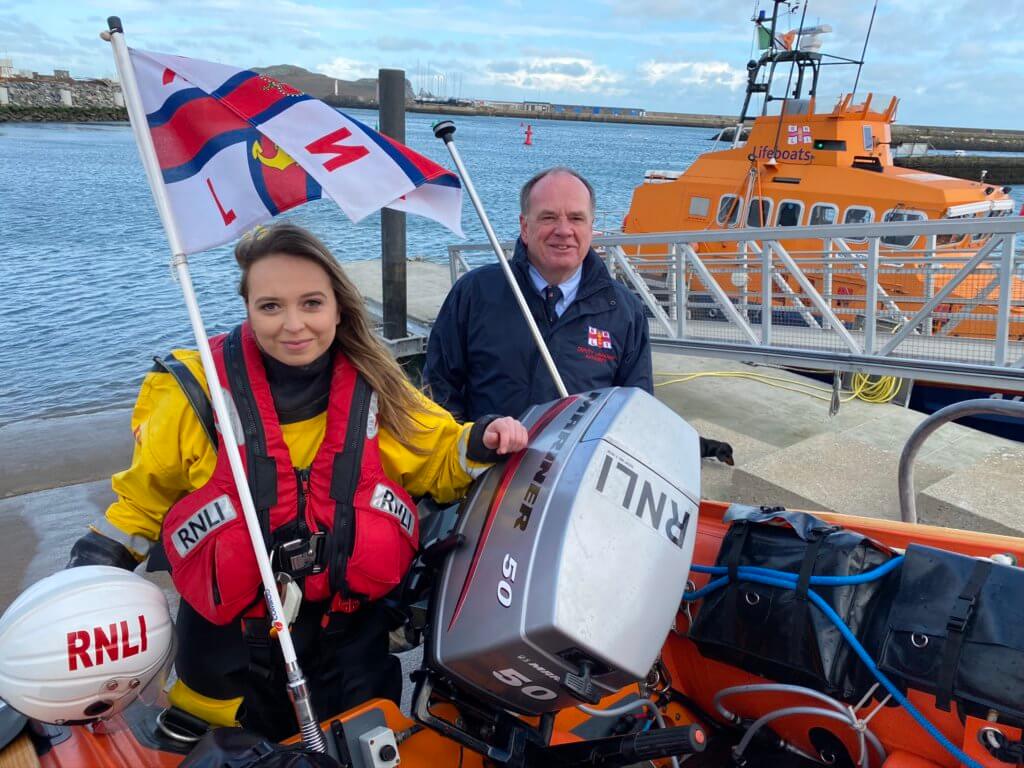 Q: What was the most dangerous call-out you have been on?

A: I’m still relatively new to the crew, so, fortunately, I haven’t had too many callouts to such situations. I do train in testing conditions though. But I know the lifeboat and our crew kit are the best in class and the lifesaving training the RNLI provides is second-to-none, which means as a crew we are prepared for all eventualities. I know I have a fantastic crew alongside me so we will be prepared whenever we get called into action, no matter what the situation is.

Q: How much commitment is involved in being an RNLI volunteer?

A: Last year Howth RNLI’s all-weather and inshore lifeboats launched 46 times and our volunteer crew came to the aid of 59 people, but on a weekly basis it can vary. We could go a couple of months without a single call-out and then have three or four in one day.

We operate a 24/7 on-call service and our crew members carry pagers and respond if they’re in the vicinity of the lifeboat station. The vast majority of the time, whoever arrives first, goes.

Q: What has been the most rewarding call-out you have ever been on?

A: One stands out to me above any other. There was a call-out this summer to a yacht that had run aground near Malahide with a family of four onboard. We took the kids and the mother on board the lifeboat and brought them back to Howth. The kids were so excited to get to go on the lifeboat. The crew showed them around the lifeboat and the smiles on their faces is something I’ll always remember”.

Q: You’re only 24 and you’re an RNLI volunteer. How does that impact on your life at such a young age?

A: I won’t lie, it can all be a bit hectic, particularly in summer when I’ve regattas on the weekends. I try to manage my time as best as possible, allocating certain evenings to race training, racing, and Lifeboat training, and sometimes having to work late.  Often, come the weekend, I’m too tired to hang out with my mates but my sailing and my social life are quite interlinked so I suppose it kills two birds with one stone!

Q: Why did you join the RNLI?

A: I always wanted to give back to the community and had thought about joining since I was in my early teens, so I just decided to give it a shot and see if it was for me. I have been around the sea growing up and knew about the RNLI. My dad was on the crew in Dun Laoghaire back in the 80s, and he became a Deputy Launch Authority (DLA) in Howth in 2014. I suppose that gave me a better insight into what was involved.

Q: Do you have any important water safety advice that people may not be aware of?

A: Always wear a life jacket when you’re on or near water. Always let someone on the shore know where you are going and when you are due back. Go prepared for your activity and carry a means of communication, like a mobile phone in a waterproof pouch or a VHF radio on a vessel. If you do find yourself in difficulty in the water, know how to float to live. To do this: lean back, using your arms and legs to stay afloat. Control your breathing, then call for help or swim to safety.

Should you get into difficulty or see someone else in trouble, dial 999 or 112 and ask for the Coast Guard.

Q: How did you start sailing?

A: Both of my parents sail. They actually met on the Asgard, the Irish sail training vessel, and my grandparents on both sides sail too. I guess you could say it’s in the blood!

I started racing from a very young age (about 9). We would do our sailing courses in summer and race on Thursday evenings. I then progressed into racing internationally in RS Fevas (2 man dinghies). I actually competed at the World Championships when I was 13, before starting on keelboats – J80s, First 40.7s, and finally I moved to Sigma 33s where I’m currently racing.

Q: What are your future ambitions with sailing?

A: I’d like to continue racing for as long as possible, competing at several national events and at least one international event a year. I’ve had an eye on offshore racing for a while now, so I think I’d definitely like to do the Round Ireland Race and Fastnet Race in a few years’ time.

Q: The Sia Partners Irish Sailing Women at the Helm event looked like a lot of fun. Any advice for someone looking to get involved in sailing?

A: The best way you can get involved in sailing is to do a few ‘try sailing’ courses in your local club. From there, you can meet other members and use the ‘crew finder’ to crew on different boats and attend social events to get to know various skippers.

For more information check out trysailing.ie.

Q: Is the sailing community welcoming to new members?

A: I definitely think we try to be welcoming to new members. Previously it was difficult if you didn’t have a boat but now all the clubs have their own boats that you can rent and equipment you can use. Once you’ve done a few introductory courses and get to know other members, they’re open to having new members on board. Many boats find it difficult to get enough crew so they’re more than happy to have new members along, and once you’ve settled in, the craic you’ll have is unbeatable.

We Went Sailing For The First Time (and you should too!)