At the age of 25, Dubliner Jim Duffy became completely paralysed due to a rare condition and terrifying condition called Guillain-Barré Syndrome. In the scary years that followed, Jim regained tiny amounts of movement. But he never gave up hope. Roll on 29 years and although far from back where he was, Jim is now able to ski on his own. Here he tells Outsider’s Helen Vaughan his incredible story.

How did you become paralysed?

One morning when I was 25 years old, I woke up and my leg wasn’t really working. By that night, I was in hospital and I could barely move. Within hours, I couldn’t move at all and it was unclear whether I would walk again at all. It turned out I had a condition called Guillain-Barre Syndrome that meant my immune system went into overdrive and attacked my nervous system. That damaged my nerves so much that they weren’t carrying the messages to my brain so that I could move.

“As some movement came back, I would be grateful for the little things I could do. It was a treat to be able to tie my own shoes or stir my coffee. Things most people take for granted.”

Can you tell us more about what that was like?

It was not a nice thought that at 25, I was totally paralysed. I couldn’t move anything. But some movement started to come back slowly to my arms and legs. I was in a wheelchair for a couple of years, and then I moved to a walking frame, which I was just hanging over at first. I didn’t have a huge range of movement from my knees down or in the lower parts of my arms. As some movement came back, I would be grateful for the little things I could do. It was a treat to be able to tie my own shoes or stir my coffee. Things most people take for granted. Eventually, I moved from a walking frame to using crutches, and then walking sticks to get around.

What do you attribute your progress to?

I put my progress down to determination I suppose. Maybe that’s stubbornness. I don’t know. I don’t dwell on it too much. It would have been easy to give up at the start. To accept that was my lot. But that’s not me. I don’t know. I don’t look at myself as being marvellous or anything, but I decided to see what was the best I could be in the situation, to do what I could. As I made progress, I’d be referred back to the physiotherapist, who couldn’t believe what he was seeing. He was surprised by my level of movement.

I always joke with my wife that there’s a fine line between determinedness and stubbornness. I have a slight stubborn streak, and I like to push it to see what I can get. It didn’t do any harm.

“I didn’t make huge progress, but I became less afraid of it. I was trying to figure out how I could make it work for me with my challenges. If I could only do a little bit on my own. Then I found the Ski Centre in Sandyford in South Dublin.”

How did you get into skiing?

My sister and her family go skiing in Italy as often as they can every year. Twice or three times sometimes, and she was always asking me to come too. I’ve been fairly limited in the type of holidays I can take. I’m not a sit-on-the-beach kind of person. I like going sightseeing and stuff, but I never thought I’d be able to ski. My wife isn’t that sporty, but we decided to go on a ski trip for our little girl. We felt we shouldn’t block that opportunity for her, so three years ago when she was five, we went to Italy too.

I wasn’t really sure if I’d ski. My wife said I should try and make an effort to do something and I agreed to try it. I didn’t know how far I’d push it. I thought I’d spend most of my time lying in the snow. But I went because I love the cold and thought I’d like the scenery in the Dolomites in Italy. 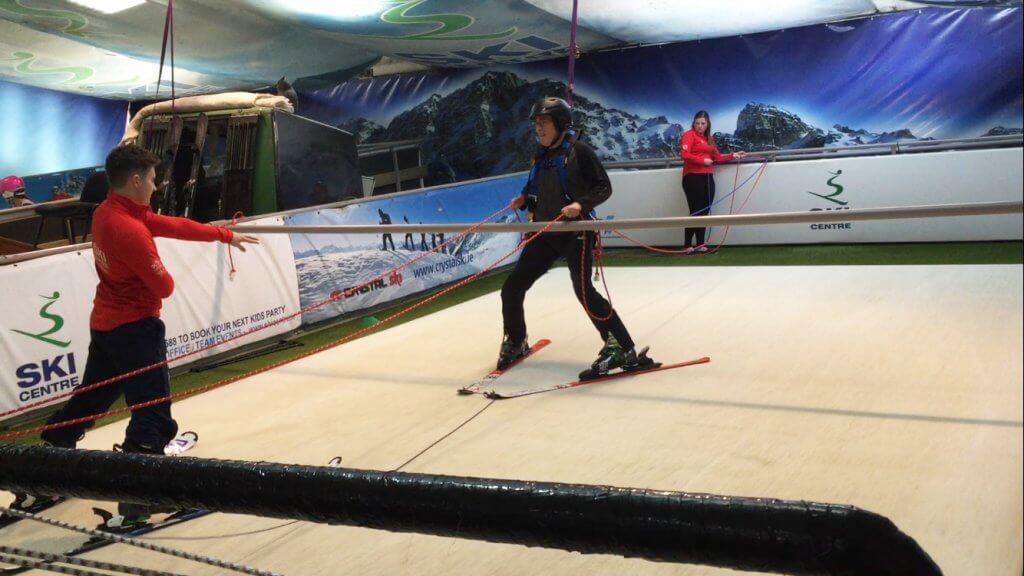 I did some research into what I might need to ski, and bought myself some boots that fitted me properly and some ‘outriggers’, which are essentially crutches with a small ski tip fixed to the bottom. They help with balance and steering. I went with a ski instructor and had a lot of assistance. When I put on the skis, I didn’t realise how slippery it would be. I tried to master standing in one spot without falling over at first, and then I did some gentle small slopes, with an instructor holding onto me as I went down.

To me, it seemed very dramatic, and unusually scary, because everything was outside my control. I used to go home in the evening and wonder how I was going to actually make it work. I didn’t make huge progress, but I became less afraid of it. I was trying to figure out how I could make it work for me with my challenges. If I could only do a little bit on my own. Then I found the Ski Centre in Sandyford in South Dublin.

“It’s hard to explain what a nice feeling it was. I was skiing totally on my own. The instructor wasn’t too far away. It was a fantastic feeling. I hadn’t done anything like that in nearly 30 years!”

Tell us more about The Ski Centre…

They gave me ski lessons on their indoor revolving ski slopes (think of a treadmill with carpet that rotates so you ski along it). They’ve taken the time to get to know me and my challenges. They’ve been really understanding and have helped me get the best from adaptive skiing, by giving me all the assistance they can. 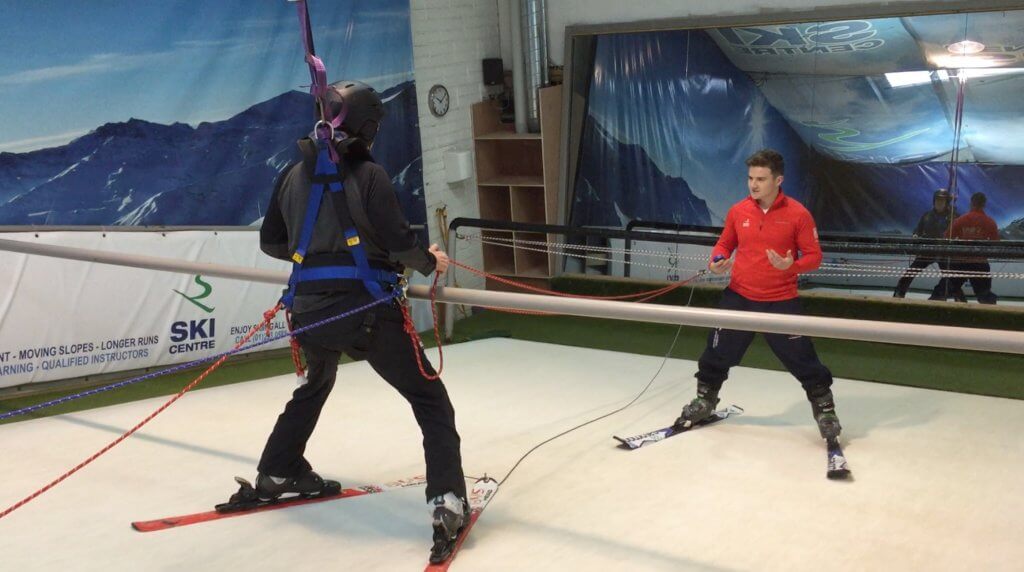 They showed me what to do on skis, how to control them. I have to do everything many times over before I get to grips with it. It’s been a challenge for them too. I used the support of a metal bar at the bottom of their indoor slope at first. Then I moved onto a harness they suspended from the roof. I try not to rely on the harness though. I try to do it myself mostly.

Since those lessons, I’ve had a totally different experience. We went to Italy again with my sister and I was able to ski on my own! The instructor wasn’t far away, but I was doing it by myself. I was totally amazed. I couldn’t get over it. It’s hard to explain what a nice feeling it was. I was skiing totally on my own. The instructor wasn’t too far away. It was a fantastic feeling. I hadn’t done anything like that in nearly 30 years! It wasn’t a very long slope but it was enough. There I was doing my bit and I wasn’t falling over. It was just fantastic!

My sister was delighted too. She thinks it’s great. She’s seen me from the start. What I went through. And she’s seen that it’s a huge thing. For me, it’s massive. I don’t know if I’ll ever get to be a great skier, but if I can just keep doing little bits, that’s good with me. I’m doing it for my daughter more than anybody else. She’s 8 now and she loves skiing. She’s flying at it. Even my wife has taken a liking to skiing.

I want to do a long slope next year and a bit more every year. I’m still doing lessons at the Ski Centre every two or three weeks. A lot of my progress is thanks to James [McCormack] and his team of instructors. They’re probably tired of looking at me, but I need that repetition to be able to grasp it and figure out how to ski with my challenges and they’ve been more than willing to work with me. I’m happy it’s progressing and I’m looking forward to putting it all into action on the snow again.

Challenge of a Lifetime: Irish Team Take on North Pole

Skiing in St Anton: Everything you Need to Know

Skiing in St Anton: Everything you Need to Know