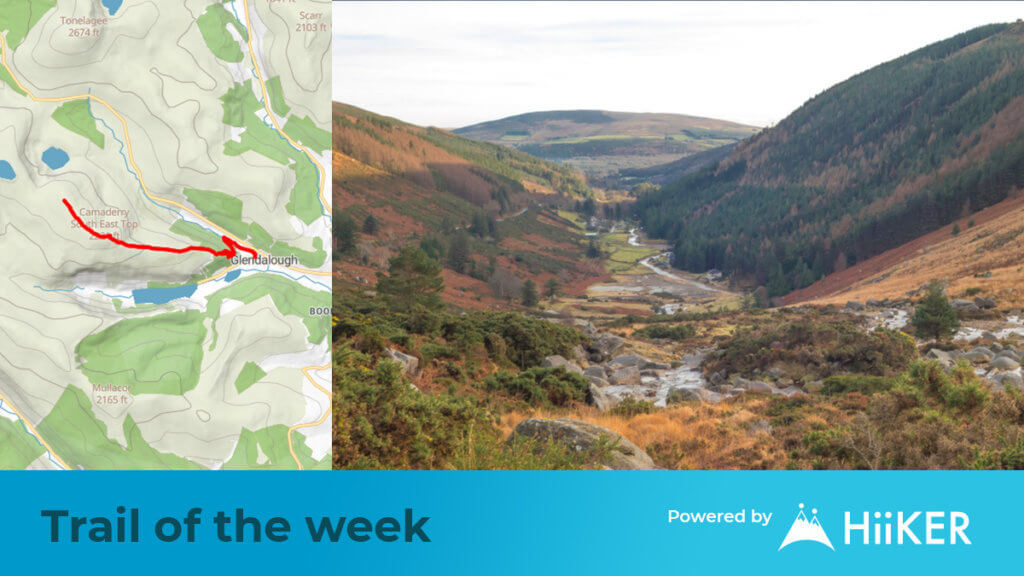 Set in the picturesque surroundings of Glendalough, Camaderry is a quieter but equally as beautiful alternative to the Spinc.

If you know the Irish outdoors then you most likely are familiar with Glendalough. For the seasoned walker, the busy summer days can almost feel like you’re in a busy town while having a dramatic, glacier-formed valley as the backdrop.

There is a reason this valley is so popular and if you’ve ever walked the Spinc trail, the many other routes around the valley or the famous Wicklow Way, you’ll know why!

While the trails in the valley and up Spinc are packed with day hikers, little attention is paid to the other peak that frames the postcard valley – Camaderry.

At 699m, it does not compete with some other giants in Wicklow. But climbing Camaderry is no mean feat. And this unique perspective on something so familiar, gives you a whole new appreciation for Glendalough.

The 11km route will take you from the stunning monastic village of Glendalough, where you can either fuel up for the climb or treat yourself with a post-hike meal. You will follow in the footsteps of St Kevin on the national pilgrim path – St Kevin’s way – along the Glendassan river and then join the Miners way onward up the mountain.

Passing through a small patch of forest, you will reach a cross-junction where the Miner’s way continues down into Glendalough. It is here where you will turn right to continue up Camaderry.

At this point you are following a pretty well-trodden route through lacken on the open mountain. It won’t be hard to stick to the trail. As you climb, you will be treated to some pretty spectacular views of the Monastic village, outward to Trooperstown Hill and the Irish sea behind you.

Like any good Irish mountain, there are many “false summits”. Just as you feel as if you are coming to the top of the climb, somehow another mountain appears! But that’s what we’re here for eh?

You’ll first summit the Southeast top (677m) and shortly after you will reach the peak of Camaderry at 699m. From here you will be treated to spectacular 360º views of Wicklow national park.

You have the option to follow on to Turlough Hill (Plateau summit to the northwest) and loop back down to St Kevins way. This route can be found here. However, during the winter months, the saddle area between Camaderry and Turlough hill can be quite muddy.

The top of Camaderry is domed and you can find shelter from the wind to take a short snack break either side of the summit. On a clear day, you’ll be treated to views wherever you sit.

This is mostly open mountain terrain. You will have a short forest path at the start, but it will get quite mucky as you ascend through the lacken. As mentioned earlier, there is little relief in the climb. Albeit, not quite that steep.

Glendalough is quite possibly the most popular hiking destination in Ireland. With its proximity to Dublin, it is no wonder why so many visit it every year.

The “Valley of the two lakes” is home to one of the most important Monastic sites in Ireland. Founded by St. Kevin in the 6th Century. I would highly recommend a stroll through the Monastic “City” with an Ice cream on a sunny summer day after your hike.

It is also home to one of the old mining villages of the Wicklow mountains. Dating back to the 1790’s, there were a collection of 4 small mining villages spread throughout the valleys of Glendalough, Glenmalure, Glendassan and Lough dan. Three of these are connected by another Hiking trail – The Miners way.

Camaderry: Things to know before you go

Glendalough is popular. Very popular. It is particularly popular during the summer months. And as such it is advised that you arrive early to guarantee a parking spot. The best car park for this trail is the Lower Lake car park.

Dogs are not allowed on this trail and it would not be advisable to bring small children.

For more info about the hike and to download the route check out Hiiker.

Meet the Lads Who Are Canoeing From Malin to Mizen Head

The International Appalachian Trail Ulster-Ireland: Everything you Need to Know About this Coast to Coast Walk

The International Appalachian Trail Ulster-Ireland: Everything you Need to Know About this Coast to Coast Walk