Photographer and climber Richard Creagh tells us about why he loves to climb in the Gap of Dunloe, Co Kerry.

It’s Wednesday evening: you’ve just left the Awesome Walls or the Gravity Climbing Centre, hands dry from chalk, forearms hard as rock and shoulders stiff with strain. You’ve a long weekend coming up and you’ve no plans. Surfing at Lahinch? Mountain biking at Ballyhoura? Naah! Time to put all those new skills to good use on real rock with some climbing in the Gap of Dunloe, one of the finest examples of a glaciated valley in Europe.

Being only 15 minutes from Killarney means it sees its fair share of sightseers. You’ll see them bouncing wide-eyed down the road in horse-drawn carts, cameras pressed to eyes and ears cocked to stories told by the locals. I’ve often wondered what tales the jarveys tell the tourists. They must find it easy to get carried away with themselves, surrounded by craggy mountain, dark lakes and gnarly hawthorns shaped by the breeze.

“My first trip to the Gap was a cold Paddy’s Day and I didn’t really have much of a clue. As I held the ropes for my partner I looked south and saw a climber on the next crag silhouetted against the sky. It looked amazing!”

My first trip to the Gap was a cold Paddy’s Day and I didn’t really have much of a clue. As I held the ropes for my partner I looked south and saw a climber on the next crag silhouetted against the sky. It looked amazing! All that air beneath and behind him, and a proud prow of rock above and before him. I couldn’t imagine being up there at the time but gradually I made my way up through the grades and have an equally vivid memory of hanging in that same position, all air beneath and behind me. The Gap is where I’ve learned and developed most as a climber down through the years and it still inspires me to get out and enjoy my climbing.

There are a lot of misconceptions about Kerry’s premier climbing venue. Rumours of soft sandstone, vegetated routes, crags that are hard to find and wet rock all prevail among climbers who’ve never been and it’s these untruths that seem to make the place unpopular.

The first complaint couldn’t be much further from the truth – the sandstone in the Gap is bulletproof on the vast majority of routes. There are very few lines with loose, dangerous sections. As with every crag in Ireland vegetation can be a problem on a handful of climbs that don’t see traffic. Grassy rock isn’t really a prominent feature of the Gap, at least not on the bulk of routes that I’ve done, which is a lot of them.

Which brings me to the next grumble – crags that are hard to find. Last May I updated the last edition of the Gap of Dunloe climbing guide (produced in the early 90s) and stuck it up to download (for free, with colour pictures!) from climbing.ie. So that should be that problem solved!

“The hard men of the group can test themselves on Jigsaw Wall’s short but intense pitches and attention seekers can climb with tops off for the tourists that marvel from the roadside at Brennan’s Leap.”

And the constantly wet rock? Given half a day, most of the cliffs dry out fully, leaving nothing but your own fear-driven excuses to keep you from getting on!

The variety of climbing in the Gap helps keep it fresh. There are short climbs, long climbs, steep climbs and slab climbs. You can soak up the evening sun on the scenic walls of Bothán or climb through the showers at Céim, surrounded by twisted old oaks and thorn trees, tucked away from the worst of the elements. The Main Face and High Buttress offer multi-pitch climbs for those seeking a longer rock trip and the white walls of Faill Ceoil provide steep routes for the weekend warrior and dedicated rock star alike. The hard men of the group can test themselves on Jigsaw Wall’s short but intense pitches and attention seekers can climb with tops off for the tourists that marvel from the roadside at Brennan’s Leap. There really is something for everyone!

Recently the profile of the place has been increasing thanks to the annual climbing meet that happens in April. The weekend usually involves people right across the ability spectrum – many beginners have taken their first steps on rock at the Gap Meet, helped greatly by the various local guides operating in the area. At the other end of the scale many of the country’s best climbers have come and left their mark on the valley with difficult new routes being put up every year. Stories are swapped over a Saturday night campfire and it’s the perfect way to meet new people and make new friends. We all go for the same reason – a love of climbing – and that shared interest kick-starts conversation that can last well into the small hours. 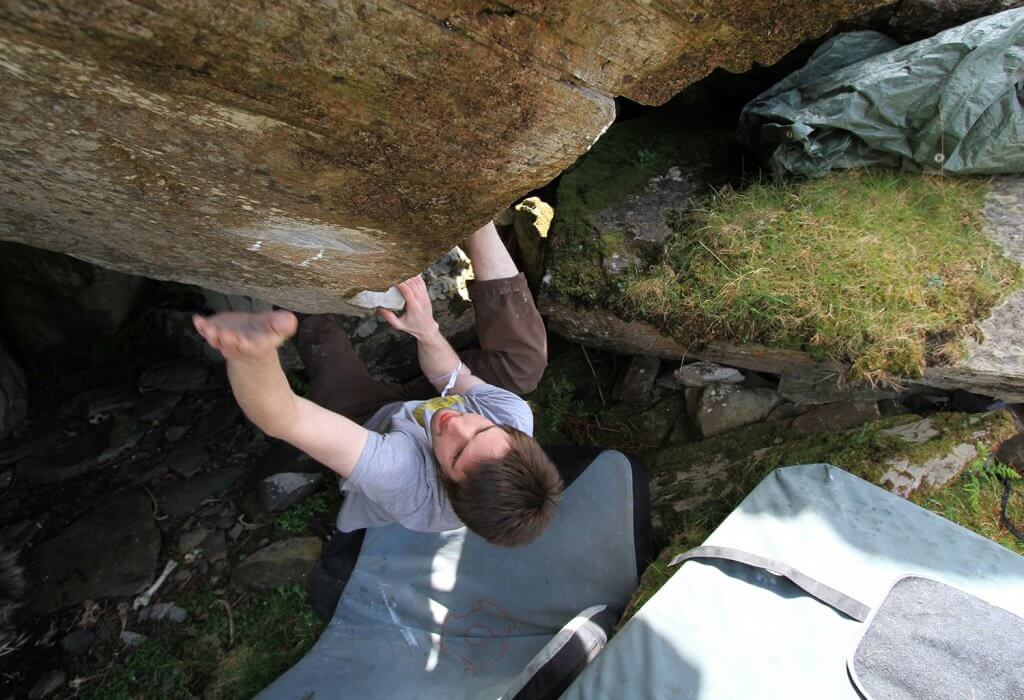 The first climbing to be recorded in the Gap was during the 1960s. It wasn’t until the mid-80s that development began properly and it lasted for about 10 years before quietening down. Back then it was much the same as now with locals being the only ones involved, although internationally recognised climbers like Paul Pritchard, Michael Reardon and Seán Villanueva O’Driscoll have visited the valley and left routes with their names on them.

Some of the pioneering Kerry crew from the 80s are still active in the area and continue to develop the climbing in the valley. The turn of the century saw another bout of development, again driven mostly by a new breed of locals who quickly filled in the gaps on the known cliffs before finding new ones to clean up and climb on.

“A short trip west of the Gap of Dunloe brings one to the Black Valley where the best bouldering in Kerry so far lies around the scenic Lough Reagh, circled by mountains and sometimes soaring eagles.”

Bouldering in the Gap didn’t really take off until a few years ago when some Cork lads came down and stole the pick of the crop from the Kerry boys on their own turf! A short trip west of the Gap of Dunloe brings one to the Black Valley where the best bouldering in Kerry so far lies around the scenic Lough Reagh, circled by mountains and sometimes soaring eagles.

Most visits reveal new routes I didn’t notice before and interesting boulders I glanced over previously. For those willing to explore there are probably as many new climbs to be done as have been recorded already.

Three years after my first trip, almost to the day, I got the early train from Cork to Killarney. After hitching a ride to the road head I walked into the empty valley under a crisp blue sky. Everything I needed was on my back and I giggled to myself at the thought of three days of climbing ahead of me. I set up camp, met with friends, and climbed all day for three days straight.

The more time I spend there the more I love it. It’s a great feeling building a relationship with a place, getting to know subtle features of an area intimately – the textures of the rock, the sounds of the valley and the shapes of the surrounding hills. For me the area has the homely qualities of a place well known but also the excitement of an area yet undiscovered, for there is much to explore in the southern end of the valley. It’s certainly a place worth seeking out.

The Best Climbing in the Gap of Dunloe

If the wet waves of Inch aren’t to be found try heading to the Black Valley for the best (and only) dry wave in Kerry! This rising traverse is one of the many classics in the boulder fields around Lough Reagh, just 15 minutes from the head of the Gap. A great introduction to bouldering in the Kingdom.

The Bone Yard Arete is probably the most sought-after bit of bouldering in Kerry, ticking all the boxes of a classic problem; beautiful line, hard moves, small holds, crucial footwork and a guarantee that you’ll have to work it! Even after the super steep start the difficulties don’t disappear as the angle kicks back and you tiptoe up on tiny holds to the top.

While severe might sound a bit much for some it’s quite manageable since modern gear replaced the hemp ropes and nailed boots of the days when the grading system was established. Rescue Rock is one of the best of its grade in the Gap. The gear is great, the moves are thoughtful and the views from the top as you bring up your partner are fantastic!

Intermediate climbing: Raven (VS 4b)

Many a short climber has wished they had wings for the first few moves of Raven. It’s ‘reachy’ but if you can get to them the holds are huge! The difficulties ease for a while as the route continues up and left across an increasingly airy ledge, before the final crack takes you up to glory. Or not!

If you want sustained, technical difficulty then head for Mother of Prague. Easier climbing near the bottom gradually builds to the committing step around a blind corner. From here take a breather and continue with confidence (and possibly failing arms) up the sustained finish. A great one for your first at the grade!

Multi-pitch climbing: Meltdown (HVS 5a, 5b)

Meltdown is arguably the best multipitch in the Gap; few other routes in Ireland take you through such steep terrain at a manageable grade. As you tie in at the base, it’s hard to imagine a line of weakness crosses through all those steep roofs and hanging corners but Meltdown will take you into the heart of the most daunting crag in the valley if you’re willing to go for it. Enjoy an atmospheric belay after the first pitch and watch your partner climb the headwall above, pulling over the final overhang with 40m of air to the ground below. Sensational! 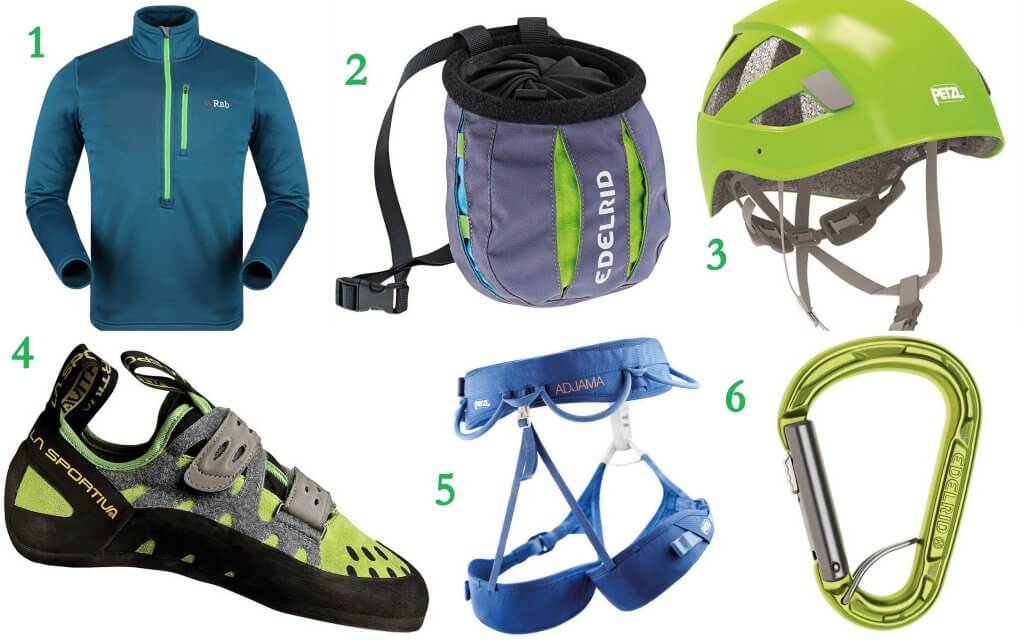 Interview: Aileen Flynn on What it Takes to Be an Ironman

Interview: Aileen Flynn on What it Takes to Be an Ironman