Lenny Antonelli takes a 10-hour hike along the Bangor Trail in Mayo and reveals in one of Ireland’s last true stretches of wilderness.

Unlike most things, it started in a pub on Achill in January. “How’s Galway this weather?” one of the locals asked me.

“Ah fairly quiet,” I said. He burst into laughter. If Galway was quiet in the dead of winter, what was Achill?

But the island is still a bustling metropolis compared to some parts of Mayo, he insisted. “Ever been to Carrowteige in north Mayo?” he asked. “It’s sort of like an Alaskan outpost.”

“Or have you heard of that aul’ Bangor Trail? I was camping out there for a few days and had to climb a mountain just to get phone coverage to call my daughter and tell her I was still alive.”

“Sure what you be doing going out into all that aul’ wilderness?”

His friend piped up: “Sure what you be doing going out into all that aul’ wilderness?”

We don’t really do wilderness in Ireland. Stand at the top of Carrauntoohil and you’re still only a couple miles from the nearest road.

But Mayo’s a bit different. The road network seems sparser and doesn’t stretch to every last corner. The county boasts some of Ireland’s wildest and remotest spots — like the towering cliffs of Achill’s western tip, or the epic crags and isolated beaches hidden by the mountains of Mweelrea.

And then there’s the Bangor Trail. An ancient route through the Nephin Beg hills of northwest Mayo, the trail was once used to bring livestock across this desolate landscape.

10 Irish pubs off the beaten track you have to visit

Scour a map of Ireland for a wild, roadless tract of land and you’ll be drawn to the Nephin Begs – the only big range of hills we didn’t drive a road through.

“I think it’s the very loneliest place in this country, for the hills themselves are encircled by this vast area of trackless bog”

“Indeed the Nephin Beg range of mountains is I think the very loneliest place in this country, for the hills themselves are encircled by this vast area of trackless bog,” Irish naturalist Robert Lloyd Praeger wrote in his 1937 book The Way That I Went – his epic account of five years spent exploring the country.

“Where else even in Ireland will you find 200 square miles which is houseless and roadless?” he wrote. “I confess I find such a place not lonely or depressing but inspiriting. You are thrown at the same time back upon yourself and forward against the mystery and majesty of nature and you may feel dimly something of your own littleness and your own greatness.”

The trail – not an official national waymarked way – starts in Newport, but the first half is mostly on road. The real Bangor Trail starts from the Brogan Carroll bothy at Letterkeen, a fairly remote mountain shelter. From here, it’s 24km of wild terrain before you reach the village of Bangor Erris.

Leaving the bothy, we cross a stream and skirt the edge of a vast conifer plantation. Barry squats down to study something beside the stream. “Otter scat,” he says. “Smells like white wine.”

After a few miles the plantation recedes into the background, and with it goes the last sign of modern civilisation we’ll see for hours.

“Ravens circle over Nephin Beg Mountain up ahead as we hop streams along the trail.”

Ravens circle over Nephin Beg Mountain up ahead as we hop streams along the trail. Though the word ‘trail’ itself is a bit a euphemism: the way varies from rock to dirt to bog, most of it sopping wet.

We hike up to the Scardaun Loughs, two lakes plucked out by the ice in the U-shaped valley between 627m Nephin Beg and 721m Slieve Carr.

“Slieve Carr is the highest mountain in the range. Hikers regard it as Ireland’s remotest summit.”

Slieve Carr is the highest mountain in the range. Hikers regard it as Ireland’s remotest summit – it demands a serious trek just to get to its base.

The mountain was said to be the home of Daithi Ban, an 18th-century highwayman who would stalk and attack travellers from the mountain. Another tale tells of a traveller who hid in the rotting corpse of a horse to avoid thieves out here.

Camping rucksacks: 6 of the best 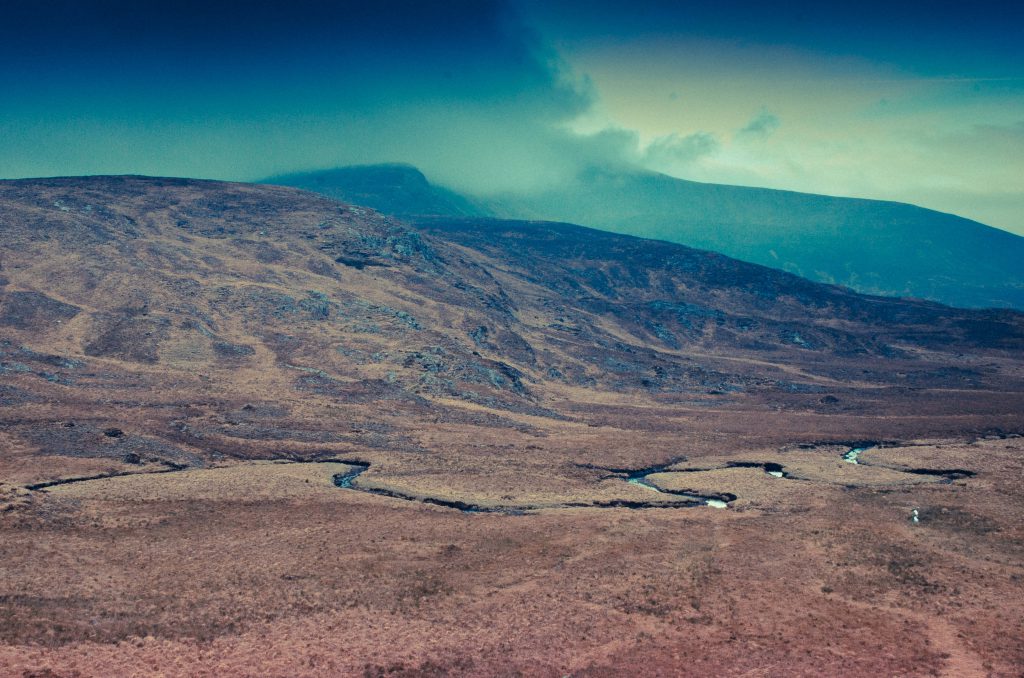 Echoes of the past

Back on the trail, we cross a gully that shelters a lone, wind-twisted oak tree – the only native tree we see all day. Ruins of old farmsteads on the way echo a time when this was a busy trade route.

“Once you start the trail, there’s no easy way out.”

Skirting the western flank of Slieve Carr, you realise just how isolated you are: to the north there’s 15km of tough terrain to Bangor Erris, to the east the mountains loom overhead with vast forestry beyond, and to the west stretches the endless Owenduff bog. Once you start the trail, there’s no easy way out.

Scots pine once blanketed this landscape, but Ireland’s climate got wetter about 4,000 years ago. Rain washed minerals down through the soil, forming an impermeable layer and water-logging the land. Mosses took over, the forest died and the vast bog formed. Out here, it’s still forming.

Barry points to an old trail that stretches west across the bog. He was advised never to take that route “for fear of disappearing into the bog”.

“Even on the trail we frequently plunge shin-deep into bog, but Barry insists he’s never seen it this dry before.”

The biggest mistake you could make out here would be to take a shortcut across the bog – the trail has been etched out by thousands of feet over the centuries into a perfect route: low enough to avoid unnecessary climbing, but high enough to avoid deep bog.

Even on the trail we frequently plunge shin-deep into bog, but Barry insists he’s never seen it this dry before.

We follow the winding course of a nameless river that emerges into the desolate Tarsaghaunmore valley.

The salmon-rich Tarsaghaunmore and Owenduff rivers that drain the vast bog are some of western Europe’s last untouched waterways, rising in remote corners of the Nephin Begs and flowing straight across the bog and into the Atlantic, bypassing civilisation. 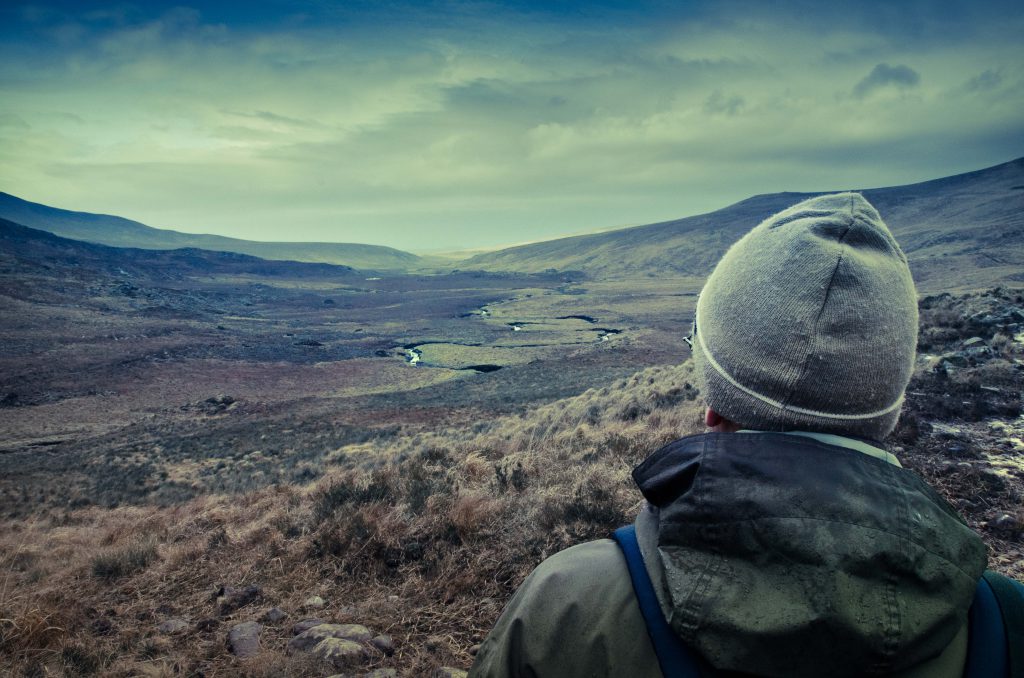 The light fades as we eat dinner on the water’s edge. A farmhouse in the distance is the first sign of modern civilisation we’ve seen since morning.

The trail meanders over a range of low hills towards Bangor Erris for the last five miles. We put our headlamps on as night falls, but lose the trail and have to fight our way through thick scrub towards the lights in the distance. The last few miles take an eternity.

My right ankle seizes up, and I limp on through the dark. We find the trail again and – finally – stumble onto a boreen just outside the village. We’ve been hiking for 10 hours. Looking back towards the trail, and towards the lonely Nephin Beg hills, all I can see is darkness.

Stay on the Bangor Trail

Mountain Meitheal volunteers constructed an Adriondack-style shelter for campers along the trail, on Coillte lands near Letterkeen Wood at grid reference F938 073. The hut contains sleeping room for up to six people and is designed to allow people to camp without a tent (though you’ll still need to bring a sleeping bag plus all your other camping supplies). It’s the first in a planned series of designated camping areas as part of the Wild Nephin project — a joint initiative project between Coillte and the National Parks and Wildlife Service to set aside the area as Ireland’s first designated national wilderness.

Why Does Running Make you Poo?

Two-Man Tents: 5 of the Best

Two-Man Tents: 5 of the Best