It is well known that carbon plates in shoes have taken the road-running world by storm in the past few years. Nearly all significant road-running world records have been broken by people wearing carbon-plated shoes. Now in 2023, we are seeing this technology make its way onto the trails. Is this a fad or a gain worth exploring?

In 2018 Nike released their Vaporfly 4% shoe alongside a campaign they were participating in with 3 elite long-distance runners. The objective of the project was; through marginal gains, pacers, performance and recovery optimization, to break 2 hours for the marathon distance. Following a vigorous training schedule and lots of data analysis the team set off on a closed race track.

The event went well and the pacing was on track until the final few kilometres. Eliud Kipchogue dropped under pace and ended up completing the 26.2 miles in 2 hours and 24 seconds. The fastest time any man had ever run the distance, but not under 2 hours. Ever since then running shoe companies have been exploring the possibility of putting carbon plates in their road running shoes. To the point where nearly every running shoe manufacturer now has a shoe with a carbon plate. In 2020 Kipchogue broke the 2-hour barrier in an updated pair of Nike shoes, the AlphaFly further clarifying in people’s minds that carbon makes you faster. But does it convert to the trails?

How does it work?

The basic premise behind the carbon plate in a shoe is that when you load the plate with the force of your stride the plate will bend, and given that carbon is a very directionally rigid material it will spring back into its original form as the shoe leaves the ground again, thus giving the runner a small, has been measured at approximately a 5% increase in energy return with each stride.

This benefits the runner in 2 separate ways; it makes them marginally faster and it also limits muscular strain. This second part is equally as important as a decrease in muscular power is often a limiting factor for runners when they are running at their limit, especially over long distances such as a marathon.

Does carbon belong on the trails? 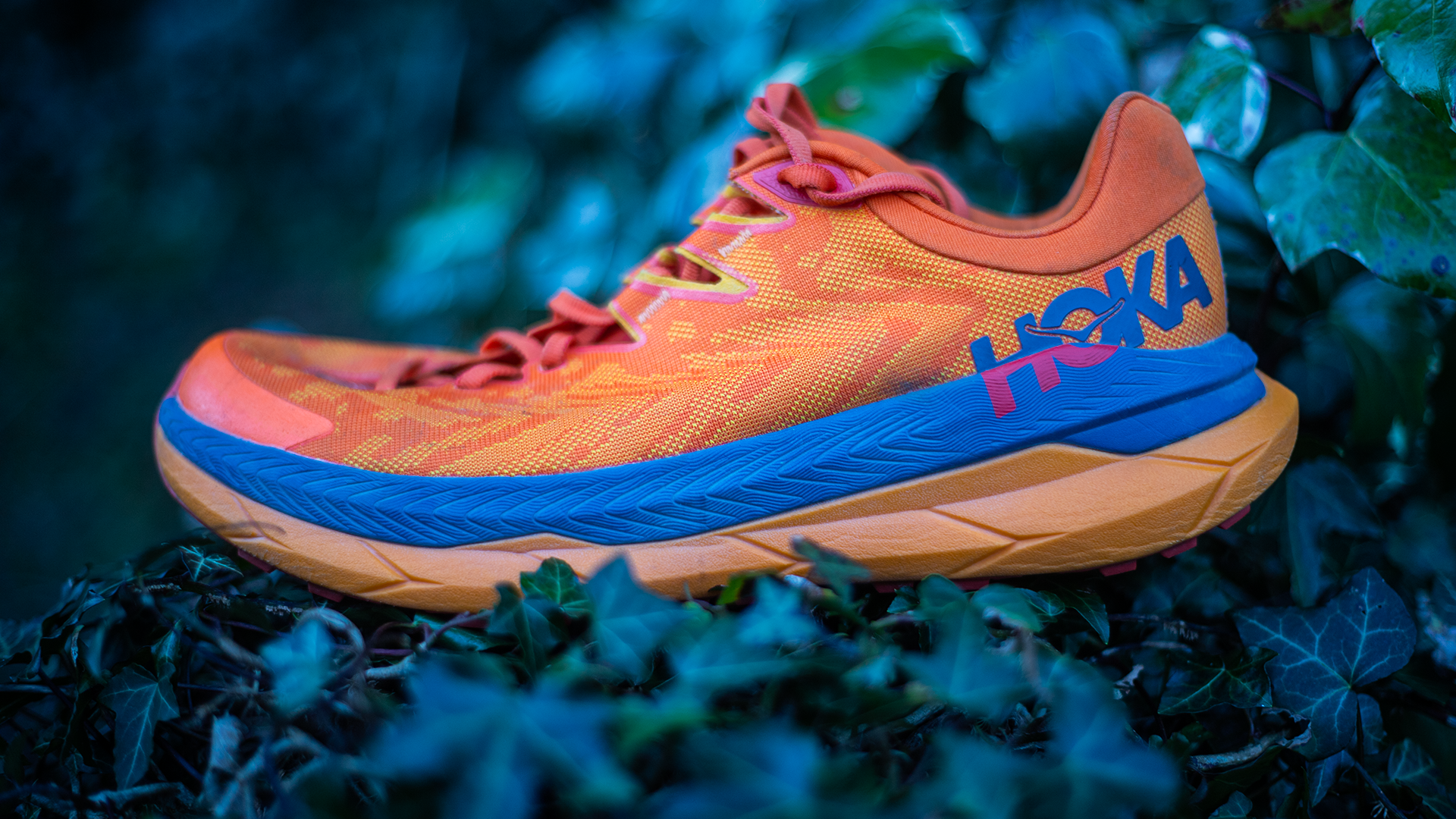 When it comes to translating the speed and spring that one experiences in a carbon-plated road running shoe to a trail-ready shoe there is more to consider than simply adding some grippy lugs on the outsole. Trail running can take place on a wide variety of different terrain, from open mountains to fire roads to boardwalks, trail running takes in it all. With that being said, running shoe manufacturers seriously consider the stability of the shoe when it is being designed for off-road use. This added stability often comes from a generally lower stack height than road shoes, which means you are less likely to roll your ankle on technical terrain.

Given that trail shoes spend a lot of time on uneven ground they will often form to the ground underfoot as you run, this is important because if the shoe doesn’t form to the ground the instability of the landing will transfer up the biomechanical chain and result in you rolling an ankle or even falling over.  Therein lies the first issue of carbon plates in trail shoes, carbon is not a very flexible material. However, the 2 shoes we have been testing have come up with ingenious ways of working around this issue. 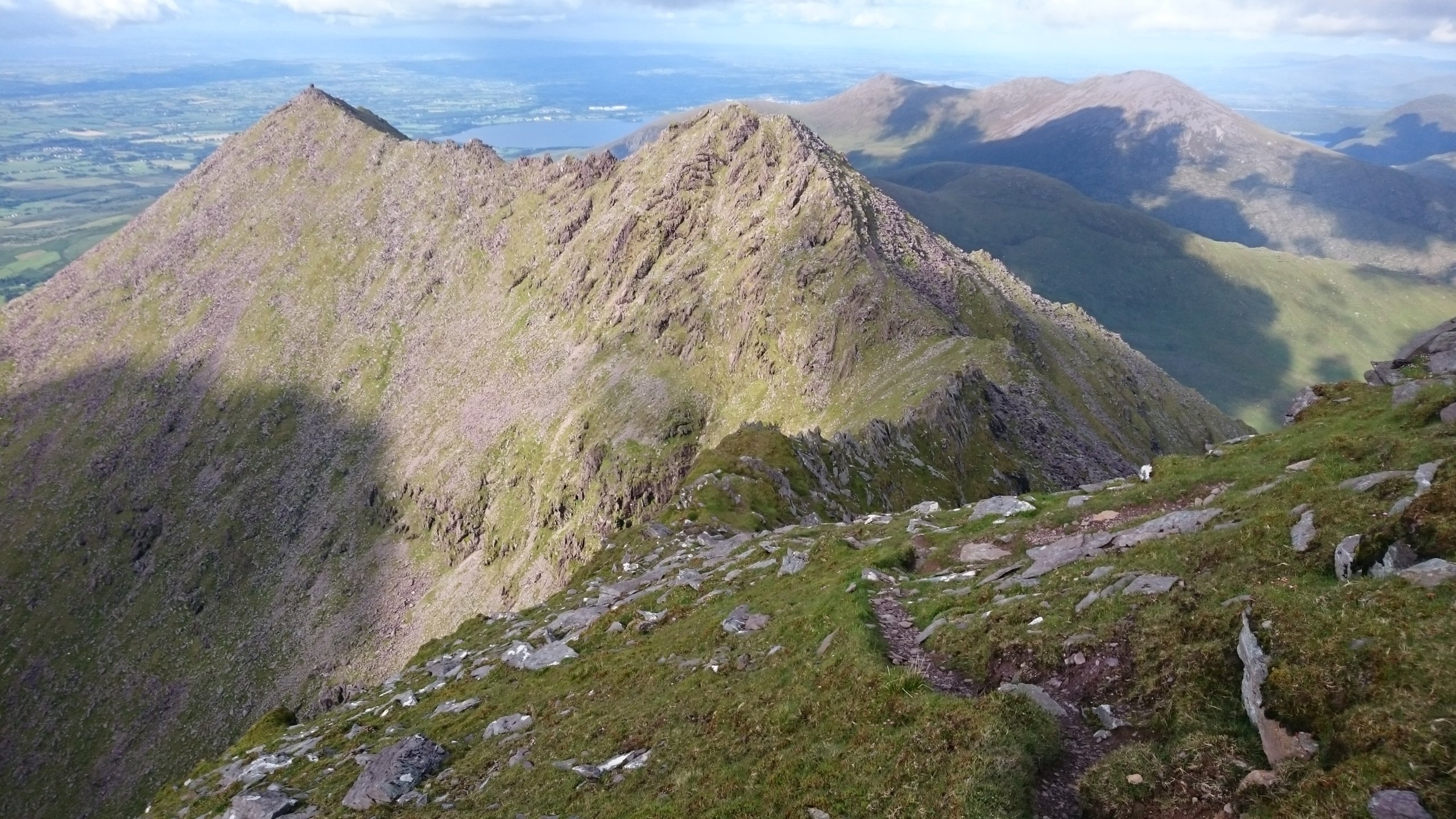 Much like many outdoor sports there are a number of runners that remain steadfast in their traditional approach to the sport. There is certainly weight behind the belief that hill running is a connection between man and mountain and that a runner should feel the ground beneath their feet. If trail and mountain running is to advance to the next level of popularity around the world it is necessary that it moves with the times. The number of elite runners taking their performances off-road seriously has increased in the past few years and thus advertising money and running brand budgets have increased. As the elite fields and incentives increase in the sport, athletes will begin looking for marginal gains in their training, recovery and equipment. So carbon plates are certainly a worthwhile consideration for those at the top, but what about mere mortals? We put 2 of the most popular shoes to #ToTheTest to see what all the fuss was about.

The Hoka Tecton X is the brand’s first foray into carbon-plated trail running shoes. The brand has used an innovative technology solution to deal with the stability issue with carbon plates in trail running shoes. The Hoka Tecton X uses two parallel carbon fibre plates sitting on the same plane to provide the propulsion and muscular relief of a standard carbon plate while also allowing the shoe to flex on uneven terrain. It seems to us as though Hoka developed this shoe in conjunction with American Ultra Runner Jim Walmsley to use at UTMB during the summer as well as other long-distance trail races, therefore implying that it is targeted at the long-distance market.

The outsole on the Tecton X is nothing groundbreaking when it comes to lug depth or grip. A large section in the middle of the outsole is just exposed midsole this was no doubt a tactical decision to save weight on the shoe but will reduce its durability and grip on wet terrain.

That being said Outsider Awards nominee for 2022 Ricki Wynne used the Hoka Tecton X for his world record-breaking run on Croagh Patrick during the summer and that certainly isn’t a smooth trail up and down!

The benefit of carbon in the Tecton X

“When I wear the Tecton X on a run, regardless of whether it is 20km or 30km, I always feel better the next day than if I wore a different shoe. It feels as though I didn’t even run I have no muscle discomfort” – Ricki Wynne Ultra Runner

Our first-hand testing of the Hoka Tecton X in a race was at the Snowdon International Mountain Race. This 16 km mountain race follows the Llanberis train trail up and down Snowdon in Wales. It is not a very long race. However, we found that the extra cushion along with the carbon plates helped to preserve our muscles on the long descent off the mountain. The muscular preservation was clear to us on the final stretch of the race back through the town of Llanberis. We were able to access another gear on the flat run into the finish. While we were certainly sore the next day we were able to manage a light jog the morning after the race. This has not always been the case for us after a race.

“I genuinely believe that the Tecton X was the best shoe choice for me at the race. Even though the shoe is tailor-made for longer trail races, it is still super lightweight and responsive for shorter races on less technical terrain” – Matthew McConnell 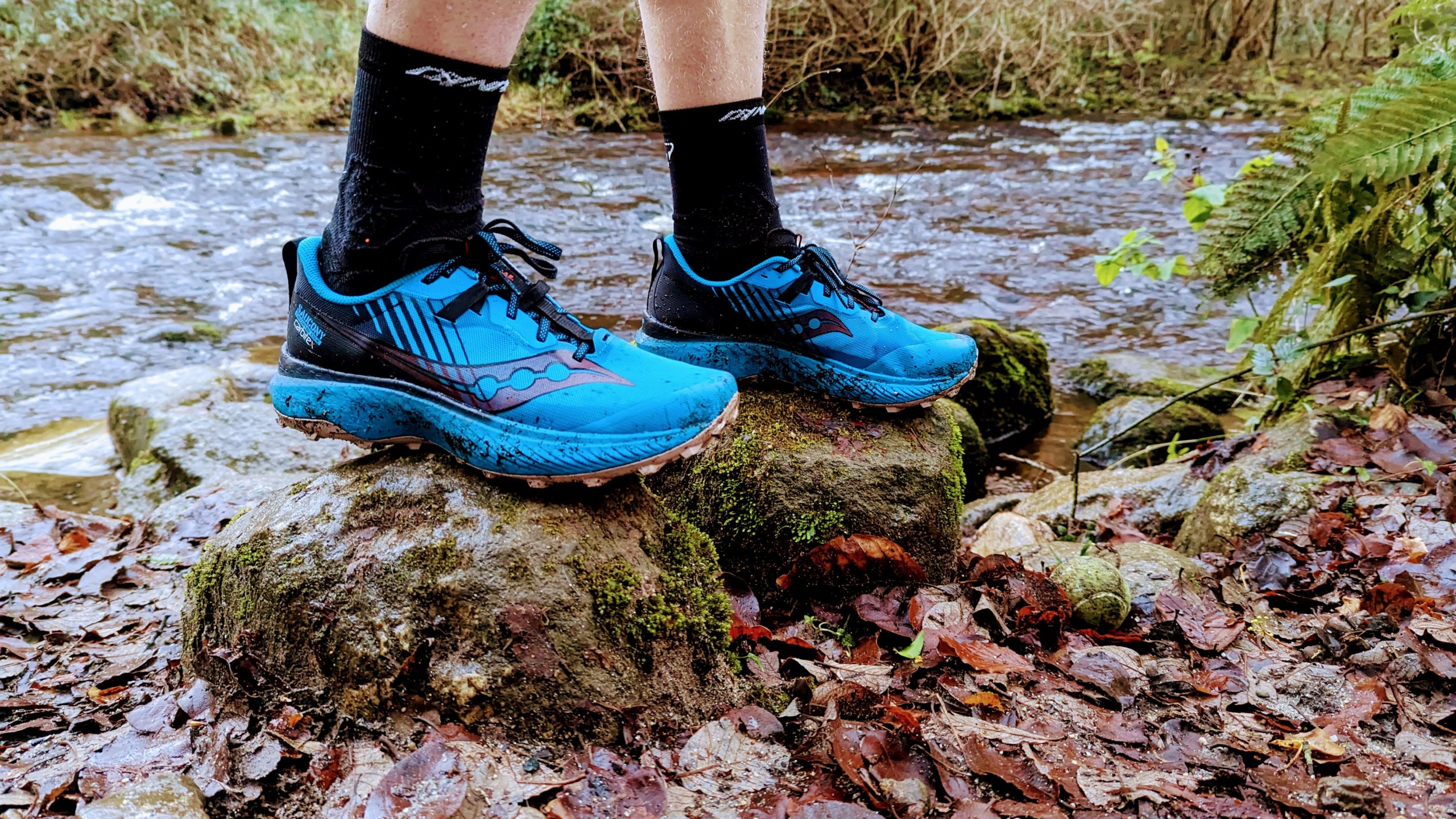 Then along came the Saucony Endorphin Edge. Saucony is a brand that is well respected in the road running world for making great quality runners. The brand is not known as a manufacturer of trail shoes. Over the past few years, they have begun to slowly introduce themselves to the ever-growing trail-running market. In 2021 the brand released its first attempt at a trail racing shoe, the Saucony Endorphin Trail Speed. This was a shoe that many found underwhelming. Now they are back with the Endorphin Edge and this shoe is a different story!

To The Test: Saucony Endorphin Edge 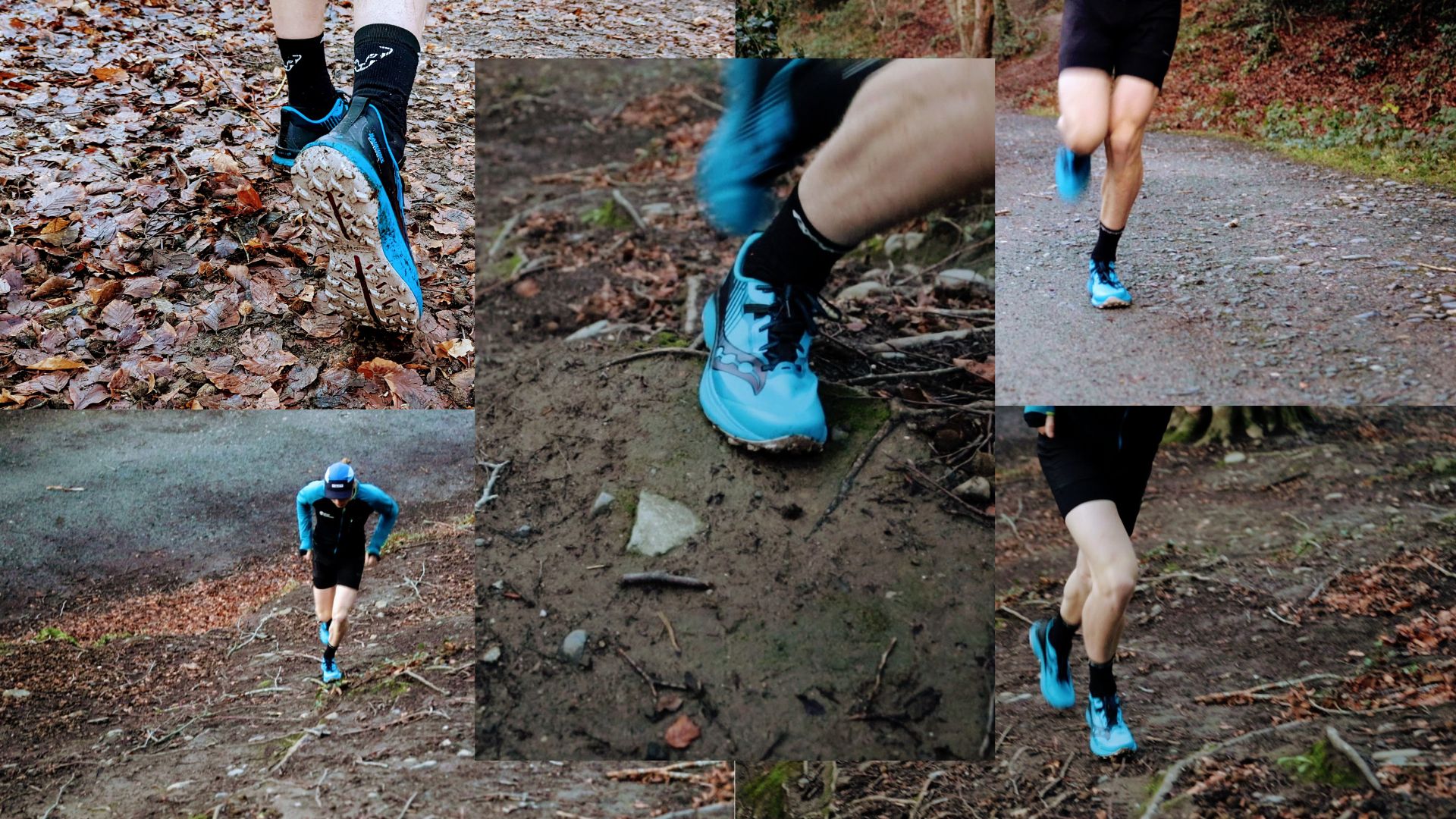 The shoe battles the stability issue by using a Carbitex™ MonoFlex carbon fibre plate in the shoe. This is a plate of carbon that has been specifically engineered to be bent in one direction with ease. This allows the shoe to morph into the trail while also providing excellent energy return in the other direction. In our testing, we found that the shoe maintains a good ground feel in spite of the carbon plate. When we picked up the pace the shoe provides a noticeable increase in energy return, initially, it is not clear to us whether this is as a result of the new midsole that has been created for this shoe or thanks to the carbon plate. Regardless, there is no clear disadvantage to the inclusion of a carbon plate.

Much like the Hoka Tecton X we believe that this shoe would be best suited to longer trail races.

So, do carbon shoes belong on trails?

Why not? All in all, we do not see why carbon-plated shoes should not be on the trails. Their efficacy is far reduced by the off-road terrain. This is clear because we have not seen large amounts of existing records being beaten by people in carbon shoes. This is a trend we saw on the roads following their introduction. If a new pair of shoes with a piece of fancy metal is enough to get some people outdoors. We are all for it!

To The Test: Saucony Endorphin Edge – the best carbon trail shoe yet?

To The Test: Saucony Endorphin Edge – the best carbon trail shoe yet?