If you want to run a marathon, but want to have a bit of craic while doing it, then the Medoc Marathon is for you!

It’s 9am on a Saturday morning and I am surrounded by the most eclectic range of fancy dress costumes I have ever seen. To my left stands a man wearing a small thong, a dickie bow and nothing else. In front of me are a group of people dressed in burlesque, pushing a massive mobile replica of the Moulin Rouge.

Elsewhere there are men dressed in drag, in lederhosen, as Where’s Wally, as Borat… you name it, the costume was probably there somewhere amongst the 10,000 people who have decided to run the Medoc Marathon. There are some really interesting interpretations of this year’s theme; ‘Dressed to the nines’.

“Race organisers have ensured that there is ample opportunity to show off the region’s wares throughout the race. And by wares, I do mean their incredible wines and other local delicacies.”

The Medoc Marathon is like no other race I have completed before. In fact, I would dare to say that it is like no other race on the planet. As the name suggests, it is a 26.2mile run around the Medoc region of France. Keen to show exactly what the area has to offer, the race organisers have ensured that there is ample opportunity to show off the region’s wares throughout the race. And by wares, I do mean their incredible wines and other local delicacies. The event has quite literally managed to combine a gastronomy tour with a marathon, and despite my initial reservations about the strange hybrid, I have to admit that it is a pretty fantastic combination.

“From start to finish the event provided sensory overload. The scenery, food, wine, supporters, it was all encompassing.”

Departing from the small town of Pauillac on the banks of the Gironde Estuary, the marathon wound its way in a figure of eight through some of the Medoc’s most impressive Chateaus. From start to finish the event provided sensory overload. The scenery, food, wine, supporters, it was all encompassing. 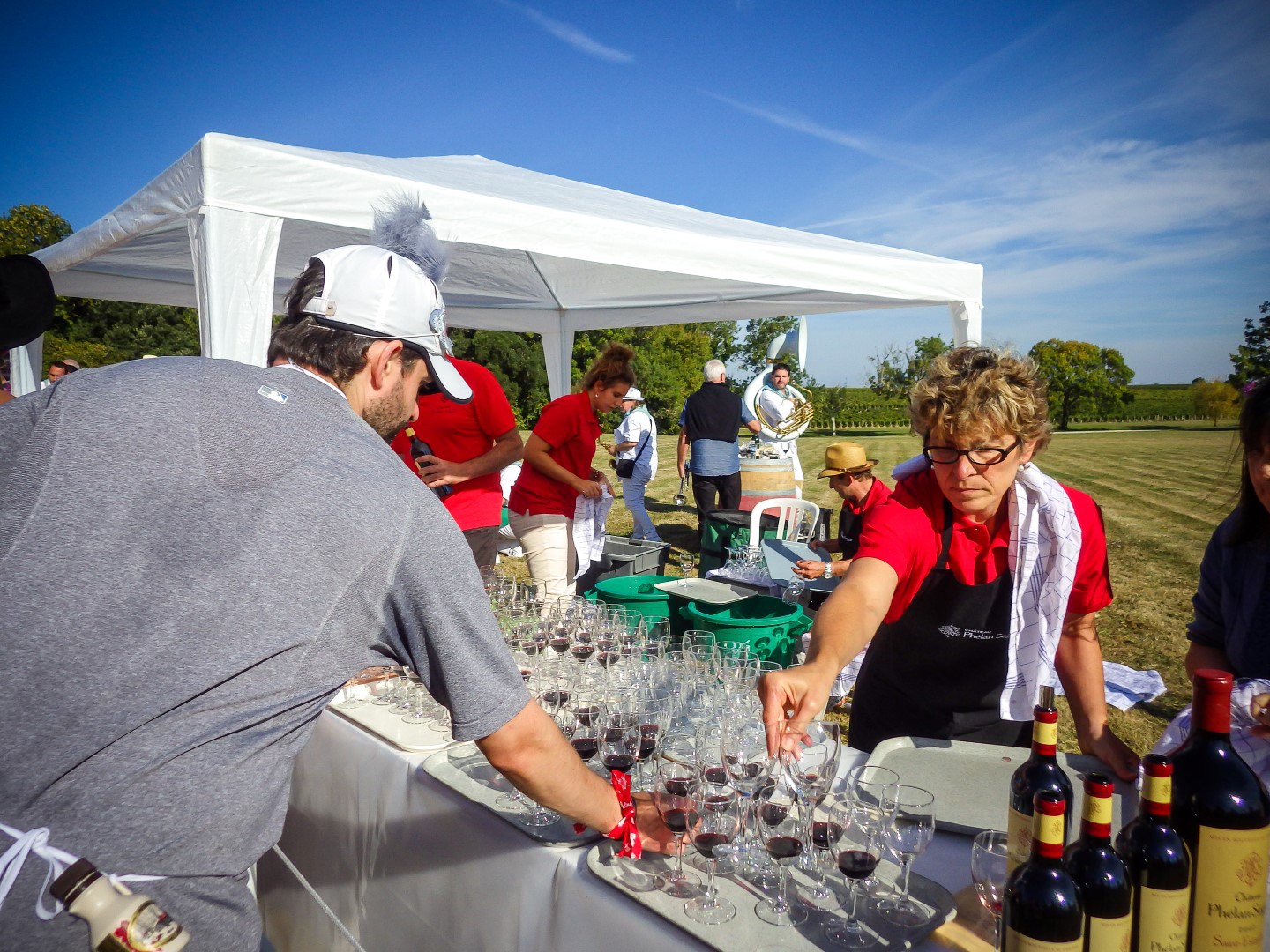 Lining up at the start line we were treated to an acrobatic display as performers were suspended in the air above us from a giant silver ball. Music blared out as competitors sang and danced along. There was not a hint of the pre-race jitters I am used to seeing at events.

A mere 2km into the race, we arrived at our first stop, Chateau Mouton Rothschild. A brass band played as we made our approach. As we entered the Chateau grounds, croissants were thrust at me by various volunteers. I reached out and tentatively took a bite. It was perfection, in fact, I could have eaten about four more. I grabbed a small plastic cup of wine from the next table. Let’s just say I would highly recommend the Chateau Mouton Rothschild Cabernet Sauvignon. Delicious. 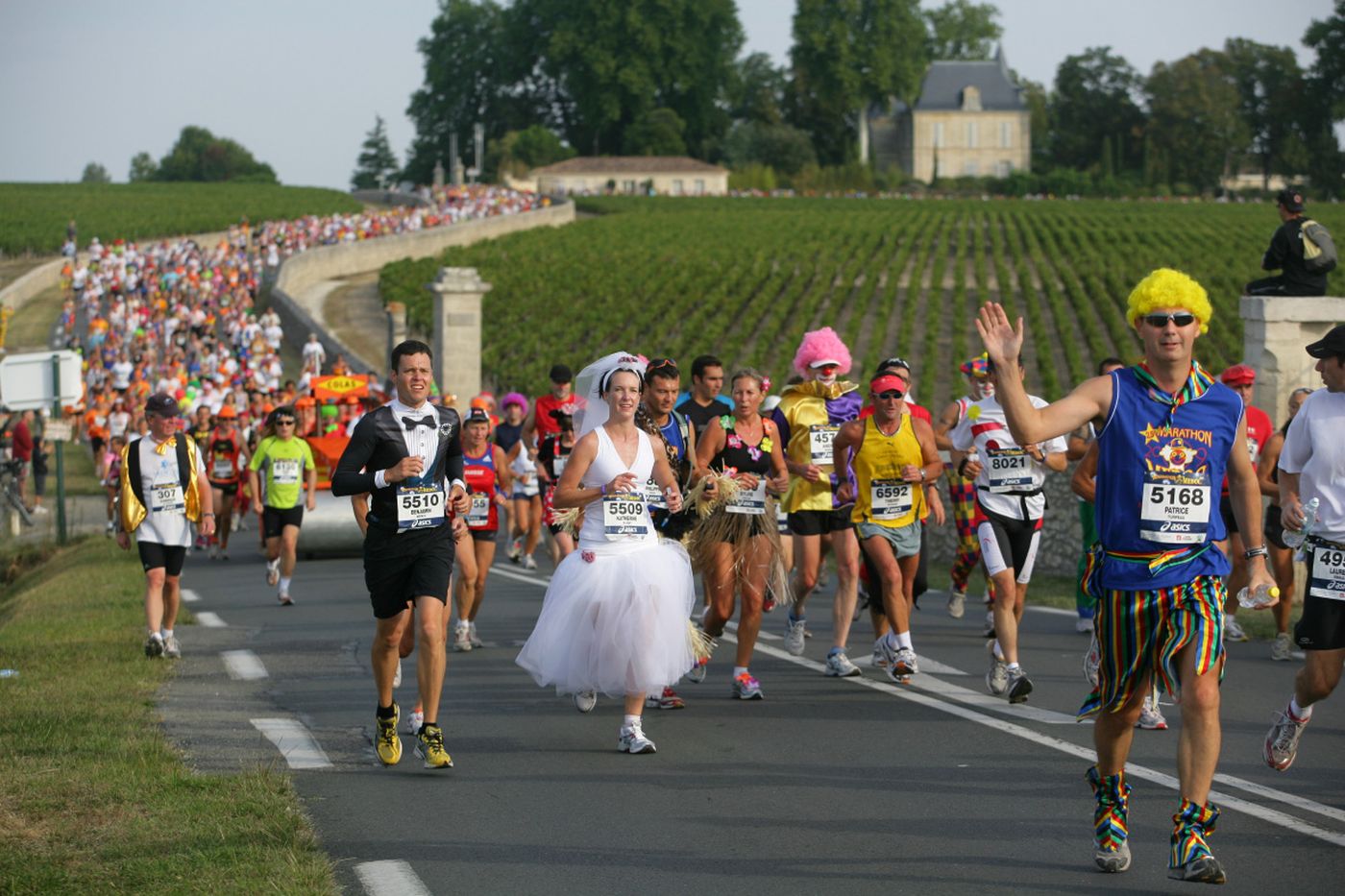 Acutely aware of the fact that I had to run a further 41km, I knew my chances of making it to the finish line in the allocated time of six and half hours would be unlikely if I continued as I’d started. After all, there were a further 17 chateaux to run through. As we jogged on, my husband and I decided it would probably be best to simply soak up the atmosphere instead of the wine at the next few stops.

As we weaved our way through the vines, I was truly overwhelmed by the beauty of the region. Each Chateau was even more incredible than the last. I didn’t even notice the following 30km of running passing by. Throughout, we were entertained by live music, enthusiastic vineyard owners and our fellow competitors who proved to be a very friendly bunch.

Even more impressive, however, was the unrelenting supporters who lined the route from start to finish, despite the torrential rain showers that punctuated the bright sunshine. Locals, young and old hollered ‘Allez, Allez,’ while handing out freshly cut oranges.

With 35km under our belts, we decided it was high time to make the most of the free wine tasting. And luckily, the race organisers had saved some of the best until last. At the 37km mark, we arrived at a small square where Chateau le Boscq were handing out their full bodied red. We grabbed some wine and took a few minutes to soak up the atmosphere. Music blared as runners of all ages danced and drank wine. While it was clear that most people had embraced the free wine tastings, nobody was drunk. A little tipsy maybe but definitely not inebriated. Which is impressive when you consider the amount of wine on offer. Although maybe the abundance of delicious food available was enough to balance the effects of the alcohol.

12 of the world’s wackiest events

Speaking of which, nothing could have prepared me for what was next to come. As we left the square and rounded the corner, the smell of BBQ meat wafted through the air. I suddenly realised I was starving, having abstained from food since the 2km mark. But boy was it worth the wait. The French really do know how to cook their steak. Eagerly, I began to stuff myself with the most exquisite beef imaginable before heading off on my merry way again.

“Men shucked the oysters at a ferocious rate as willing participants gulped them down. “

But not for long! Just 2km down the road we were treated to yet another party. Boxes and boxes of oysters were laid before us along with wine from Pichon Baron to wash them down. Men shucked the oysters at a ferocious rate as willing participants gulped them down. 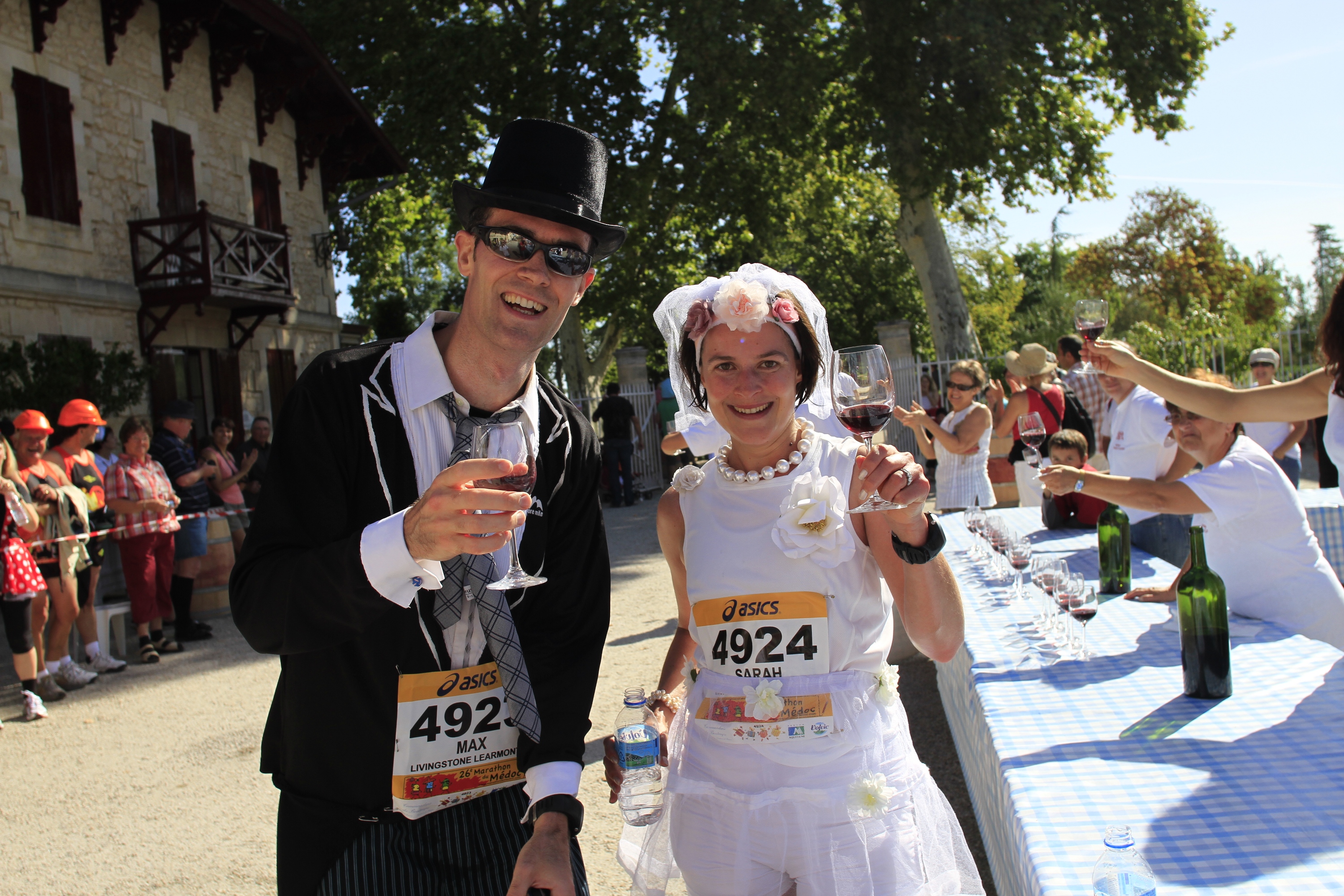 At this point, we were restricted to moving at a very slow pace. For future reference, a belly full of red meat, oysters and wine is not ideal for running!

But it didn’t matter. It was well worth taking the foot off the gas in order to soak it all up. The live music continued at regular intervals over the rest of the course. And with one final stop – the ice cream stop – to cleanse the palate, we were on the final straight back to Pauillac. The whole town seemed to have come out to cheer on the runners, it was brilliant.

As we crossed the finish line, we felt oddly refreshed and definitely not as tired as we would on a normal race. It was just as well, because it turned out the party was only just beginning!

Stay: Most competitors choose to stay in Bordeaux, there is an hour long train from the city centre that brings you to the start line in Pauillac and back after the race.

Registration: The 10,000 spots for the Medoc Marathon are also snapped up immediately. The organisers have three waves of entries, the exact opening dates for which are never revealed. Instead, you are encouraged to check the website daily from mid-March for two weeks. Don’t hang around if you see registration open. Last year 3,000 places were sold in just two hours in one of the waves.

Fancy dress: My advice to plan in advance and embrace the theme.

Don’t miss: The food market on the banks of the Garonne River in the centre of Bordeaux. It is the perfect way to while away a few hours the day after the race. It offers a wide range of local produce and even further opportunity to try a few more local wines. Be warned though, the stalls start to shut up shop at 3pm.

The map of the race is available here: http://www.marathondumedoc.com/images/stories/medoc_pratique/Parcours_marathon_du_Medoc_2015_.pdf

Is Caffeine Beneficial for Athletic Performance?