Aiden Sheridan, a 43 year old married father of two, is going to attempt to swim the length of the Shannon (245km) between the 15th and the 29th of July. He will be doing this in aid of the Irish Cancer Society and East Galway & Midlands Cancer Support as his brother Mark passed away from cancer in September 2017. 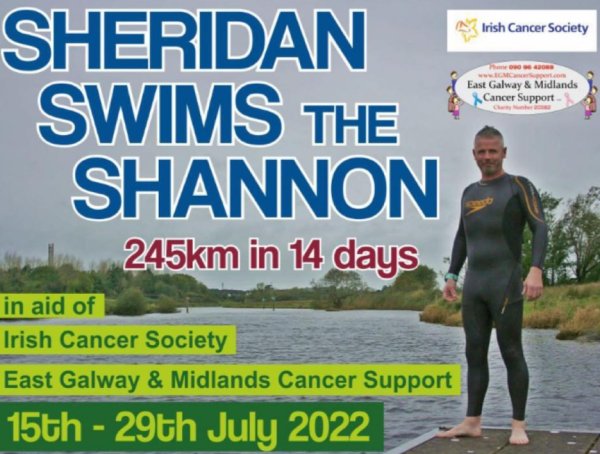 A bit of background…

Aiden has already completed a phenomenal feat of endurance. Back in 2016, he ran 52 marathons in 52 weeks in aid of Breast Cancer Ireland as his sister, Jennifer, had been diagnosed with breast cancer in 2015, but thankfully she made a full recovery.

The following year, Aiden’s brother Mark received his diagnosis and passed away. During the last chat they had, Mark told Aiden that he would have to do something even bigger than 52 marathons in 52 weeks for him. Aiden told Mark that they would talk about it again but unfortunately, they never got the chance as Mark passed away two days later.

Some time has passed and Aiden has been training. He is now ready to take on this monumental challenge in memory of his brother Mark. Aiden is going to attempt to swim the length of the Shannon starting from Dowra, Co Cavan, and finishing up in Limerick City from the 15th to the 29th of July.

How to support the swim…

You can support Aiden by sharing his story or by following the link below to donate to the Irish Cancer Society and the East Galway & Midlands Cancer Support. We are wishing Aiden the best of luck with this challenge and will be cheering him on all the way.

10 Gifts for the Outdoor-Loving Dad this Father’s Day

7 Essential Pieces of Kit Every Open Water Swimmer Should Have

7 Essential Pieces of Kit Every Open Water Swimmer Should Have