Extreme endurance adventurer Sean Conway is the first and only man in history to cycle, swim and run the length of Britain. He completed the record-breaking feat in 2015 when he ran from John O’Groats to Land’s End in just 44 days, having previously cycled and swum the route.

His most recent achievement was the world record for cycling unsupported across Europe. He completed the 4000 miles route in 24 days, 18 hours and 39 minutes.

Born in Harare, Zimbabwe, Sean had an adventurous upbringing in the Mana Pools National Park with his conservationist game ranger father, Tony. He spent his early years climbing trees and chasing elephants out of his garden, and this unique childhood has been the fuel for his adventurous ambitions.

Well-known for his quirky take on endurance sports and adventures, Sean came to the UK in 2002 with just £100 in his wallet and started working in Cambridge cutting 12,000 cabbages a day and then as a freelance photographer in London, whilst living in a tiny room in London with 7 other people, spending any cash he earned on various travels and bonkers adventures. 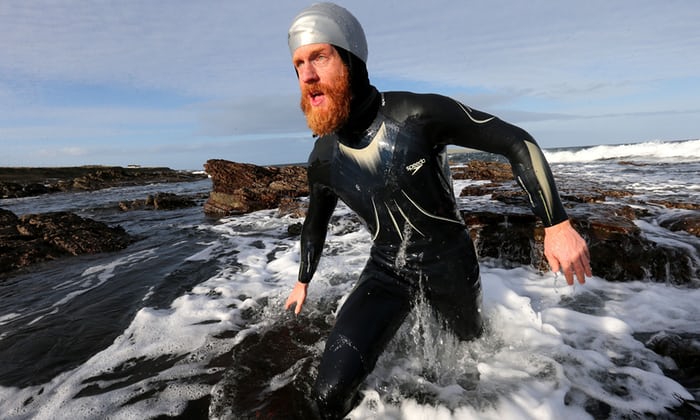 Sean famously sold his photography business for just £1 to pursue his dream to break the world record for cycling around the world, Sean gained sponsorship and set out on this epic adventure on 18 February 2012. After three weeks he was ahead of schedule averaging nearly 180 miles a day. His dreams were shattered in America when a driver hit him causing severe whiplash, concussion, torn ligaments and a compression fracture to the spine. Despite this, Sean continued on dropping to 140 miles per day, changing his goal to get back to London in time for the Olympics and raise money for charity. He made it back with a week to spare, having covered 16,000 miles – 12,000 of them with a fractured spine.

In 2013 he became the first person in history to swim the length of Great Britain, having previously cycled it in 2008. After battling the weather, currents and seemingly endless swarms of jellyfish, Sean and his legendary beard wrote history on 11 November 2013, after 135 days at sea.

In 2015, after a failed first attempt at running Britain, he completed the Ultimate British Triathlon when he finished his run from John O’Groats to Land’s End, without undergoing any kind of training in advance.

In 2016 Sean raised the bar once more when he took on the greatest challenge of his life. Starting in April 2016, he completed a self-supported 4000+ mile, continuous Ultra Triathlon that circumnavigates the entire coast of mainland Britain and Discovery Channel followed Sean’s incredible and dangerous journey.

Get 10% Off Tickets to 53 Degrees North Adventure Festival

K2: 8 Things You Never Knew About the Second Deadliest Mountain in the World

K2: 8 Things You Never Knew About the Second Deadliest Mountain in the World