Once a year, on the third weekend of November, humans gather upon the hills of Alicante. These specimens – consenting adults all – pay to run anywhere from 20km to 101km for the sake of two free beers upon the crossing line. 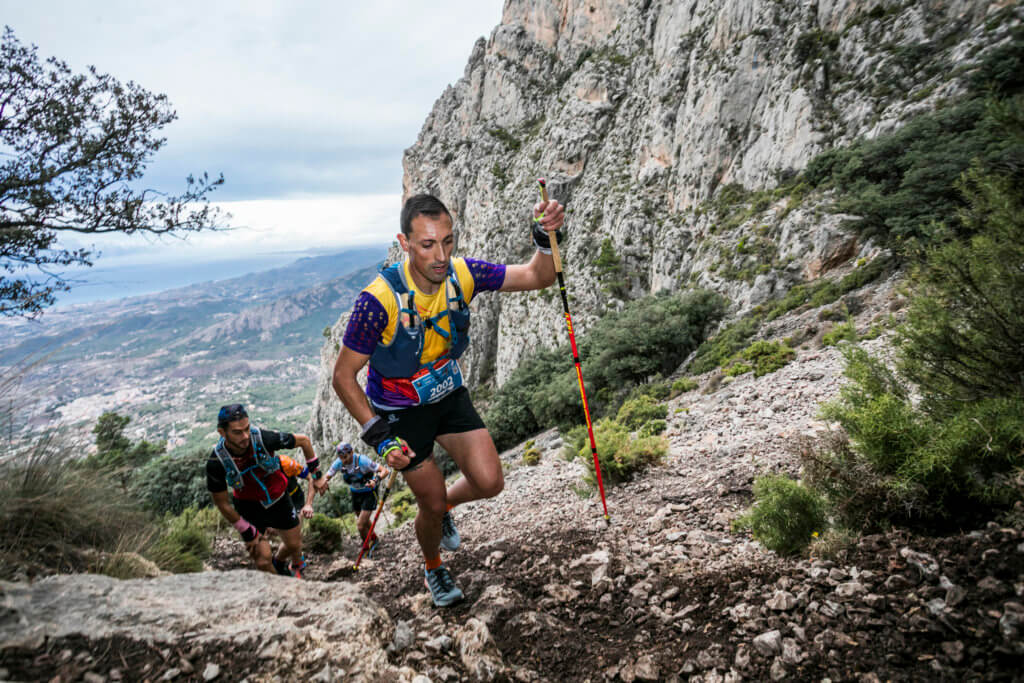 There were about 4000 entrants in all, with 350 entrants in my event, and, to my amazement, I finished mid-table – and that included me getting completely lost for the best part of 15 minutes during the final kilometre on the vertiginous descent to the hillside town of Finestrat.
But on the bright side, I’m now on first-name terms with most of the canines of Finestrat, who were outraged by the sight of this red-faced wheezer trundling forward and back past their gate, as if in desperate need of the jax, having somehow managed to lose the other 349
competitors within a hop, skip and a jump of the finishing line.

Leaving Finestrate (i.e., this town is also the starting point), the course takes you through and up to an hour of narrow paths cutting through aromatic pine forests, while above the treeline a scrub-like aesthetic unfolds, off-setting great Monument Valley-like verticals of stone towering overhead.

The parched terraces, sculpted out in the time of the Moors, are left weaving along the sharp valley sides far beneath you; the higher you get the more they resemble the undulating backgammon boards. Far beyond, about 10km south, the Mediterranean sulks beneath a surly sky while out to southeast the abject towers of Benidorm cling to a strip of coast.

The ascent was characterised by two women roughly 30m in front of me who kept insisting their female friends, roughly 40m behind me, catch up. However, their friends, like the two women, were having none of it.

While I don’t speak any Spanish that can’t be mined from an episode of Speedy Gonzalez, I’m sure I picked up at least 60 different indigenous profanities, weaved into what I took was multiple iterations of ‘hurry your sorry asses up here’; to which the responsorial psalm was bellowed back along the lines of ‘slow the f**k down, girlfriend.’ To my delight, this echoing chorus of dissent treaded its way up the mountain over the first hour, neither party giving an Iberian inch; so steadfastly stubborn, so wonderfully Spanish. 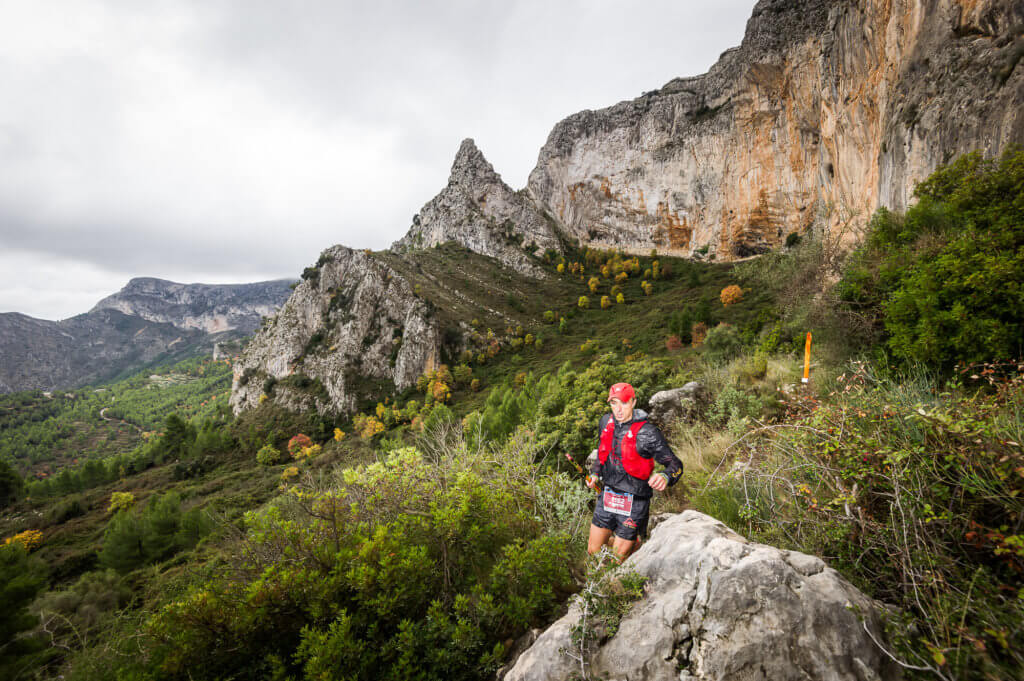 From Ford to Ferrari

Soon after touching down on the afternoon before, I’d witnessed the final 17km of the 75km and the 101km event, in the town of Sella, where the local orchestra turned up to play the runners in, and the festive atmosphere of the trails was all on show.

Although early winter, the temperatures hovered at about 13 degrees Celsius with it being maybe 3-4 degrees less on the mountain pass. And while the only training I did in preparation was on a treadmill twice a week, don’t let the elevation put you off as the reality is you will be walking most of that, and the craic and banter at the two water/food stops en route will help coast you along.

The only issue was it had bucketed down the night before, leaving a sticky slide of clay across many of the rocks, but that thankfully turned out to be quite localized; a couple hundred of metres, here and there. It wasn’t exactly the Somme, but there is nothing to dampen the spirits, I find, more than mud.

Any regrets? Just two. Firstly, that I didn’t train more in preparation, as I simply would have enjoyed it even more than I did. And secondly, that I didn’t enter the 29km event, or possibly something stiffer (the 45km).

Still and all, there’s time to transform this Ford Transit of a bod into a Ferrari … one of these decades and run a little further. This time next year Rodney, eh?

And what exactly, you may ask, is this Costa Blanca? A title coined in the 1950s to promote the then non-existent tourism industry here, the Costa Blanca (‘White Coast’) is a 200+km sun-kissed stretch of Mediterranean coastline in the Alicante province of Spain.

Ok, it may have over 170 beaches (and the most blue flags in Spain) and with an enviable average water temperature of 19.5 degrees, but the ‘costa’ moniker belies the bigger picture that awaits inland. Along with the lack of overt/mass tourism inland, a key draw for me is that it’s one of the most mountainous provinces in the country, projecting more than 40 peaks over 1000m high. These are dotted about rugged, timeworn villages armed with ancient, fiercely local customs. The interior offers a plethora of multi-adventure sports, but the GR-330 is arguably the most renowned: an off-road inland path winding more than 430km in 20 digestible stages.

With a day to spare

If you’ve a day to spare either before or after the trail run, or preferably both, then you will have to get over the B word. Go on, say it: Benidorm. For me, it is to Alicante what Temple Bar is to Dublin, in that it manages to corral all the people you’d otherwise never wish to encounter into a relatively small strip of hedonism, rather than polluting the wider sphere. Think of it much like Killarney, in that it’s only really there because of its sublime setting. But Killarney’s low-density sprawl, like so many of our towns in the most scenic parts of Ireland,
undermines the very thing it is purporting to promote, whereas at least Benidorm may look like a Thunderbirds film set, but is highly concentrated into high rises within 500m of the shore.

For a city of approx. 70,000 full-timers, the city soars to more than half a million through the summer, while maintaining a relatively low, more sustainable carbon footprint. 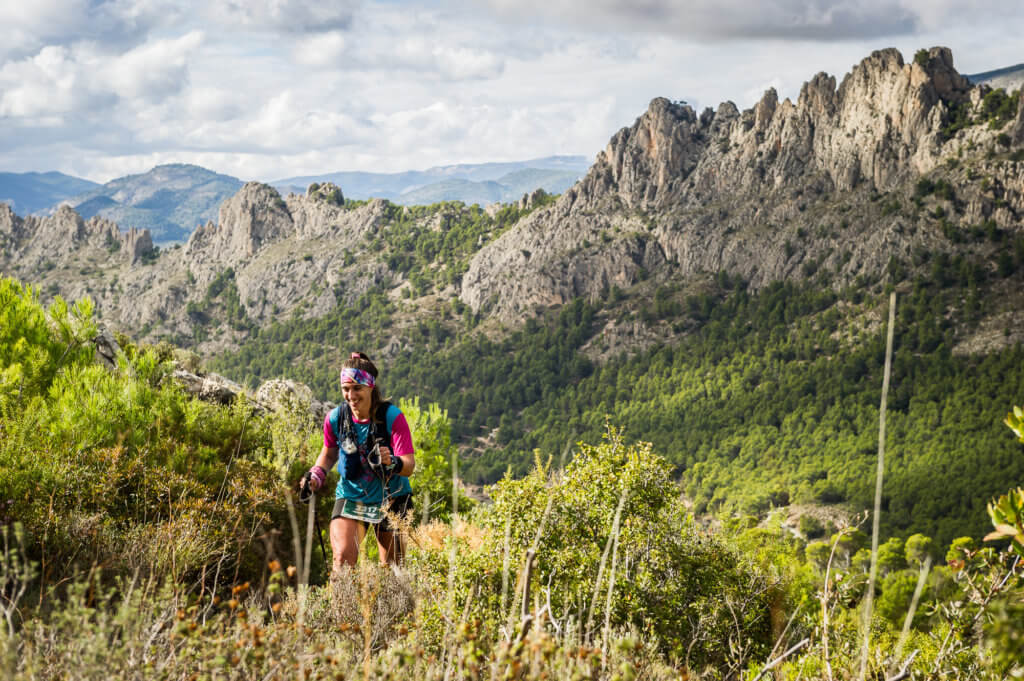 The Serra Gelada Natural Park begins not so much on the outskirts of Benidorm as at the edge of its
centre, within a sea splash of the northern beach-end. Pristine and undeveloped, it sports multiple walking/running trails across over 5,000 hectares of protected coastline, with cliffs ranging up to 300m high, small islands, dune fossils and two flora micro-reserves. Its most celebrated trail is the clifftop hike from the edge of Benidorm to the Albir Lighthouse, a distance of approx. 8km each way.

No bikes are allowed along the trails, but if you prefer a more sedate option, touring the city, then hire an e-bike from Tao Bike in downtown Benidorm – €25 per day, or e-bike + sea kayak for €45. Or go with Marco Polo expeditions, who offer everything from road bike hire, coasteering and horse riding, to sea kayaking, paragliding, sea fishing and scuba diving.

If you appreciate your comforts before/after the event (the carrot on the stick), then I’d strongly recommend staying at the Barceló La Nucía Palms. Somehow all that sweat, grunt and mud of the trail run seems so much more manageable when you know a lovely room, pool and spa await you on your return. While it is a modern, luxury 5-star hotel only opened in 2021, being Spain, room prices
start from €81 per night if you book on the official website. Please note, that while the trail events start/finish in the small hill town of Finestrat, it is thankfully not a town focused on tourism accommodation. La Nucia is about a 15-minute drive from Finestrat
and transfers to/from your event can be organised at the hotel, as they can from/to the airport (25-30 mins drive).

How to get there

At time of writing, Ryanair fly direct to Alicante from Dublin from approx. €21 each way (for no check-in luggage).

Jamie Ball is a freelance journalist and was a guest of Turespana ( www.spain.info/) and Costa Blanca Tourism ( www.costablanca.org )

Women at the Helm: Leading the Way in Irish Sailing

How Do I Start Sea Swimming? Everything You Need to Know

How Do I Start Sea Swimming? Everything You Need to Know